On May 10, Brazilian artist Paulo Ito posted this mural on the doors of a schoolhouse in São Paulo's Pompeia district. Less than a week later, it has become an international sensation. 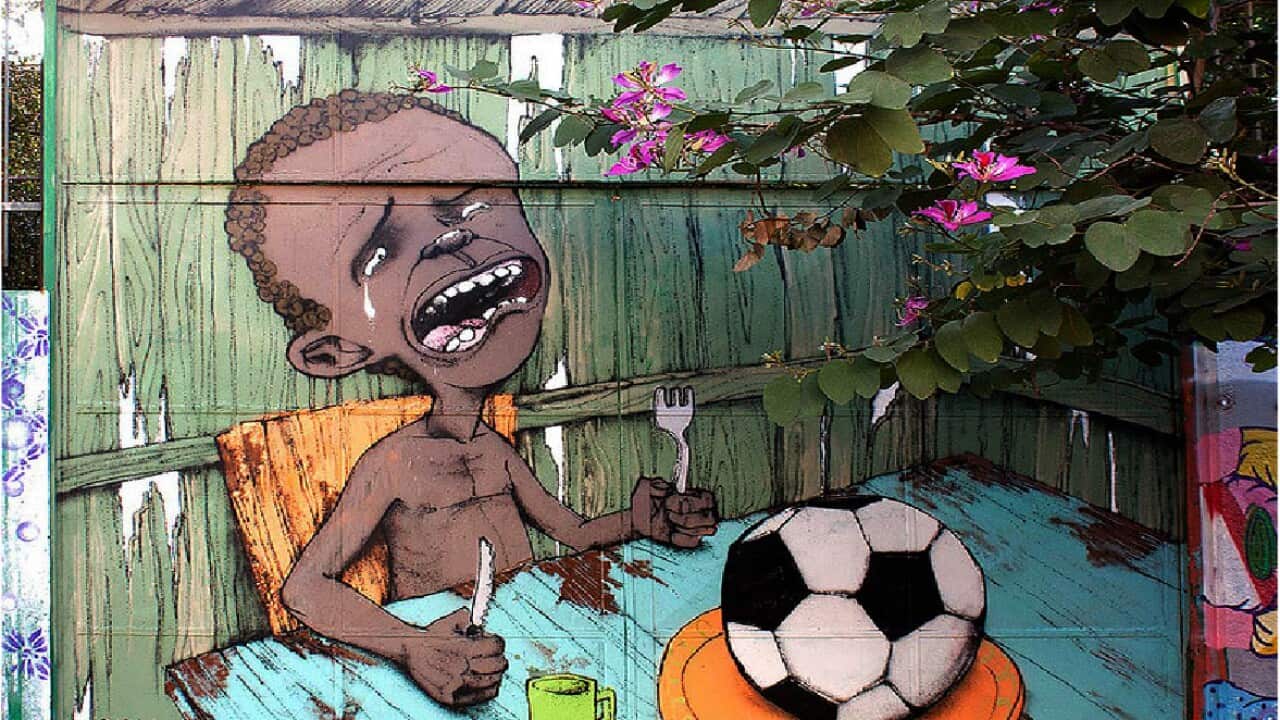 On May 10, Brazilian artist Paulo Ito posted this mural on the doors of a schoolhouse in São Paulo's Pompeia district. Less than a week later, it has become an international sensation, drawing huge attention on Facebook. It has also taken off in Brazil — a post on the popular Facebook page TV Revolta has been shared and liked more than 40,000 times.

I first saw the image when The Nation's Dave Zirin posted it on Twitter. The portrait of a weeping, starving Brazilian child with nothing to eat but a soccer ball is so simple and evocative that you don't need to know much about Brazil to wrap your head around it. All you have to understand is that despite massive gains made over the past decade, poverty levels are still appallingly high, and the World Cup is costing the nation billions of dollars that could be spent elsewhere.

"People already have the feeling and that image condensed this feeling," the São Paulo-based Ito told me in an interview this week. He says he's never created anything so popular in his 14 years as a street artist, and was surprised by the powerful response. "The truth is there is so much wrong in Brazil that it is difficult to know where to start," he explained via Facebook chat. "I didn't mean [to say] nobody is doing anything against poverty," he said of the mural. "But we need to show the world or ourselves that the situation is still not good."

Advertisement
Earlier this month, the populist Brazilian president Dilma Rousseff announced increases in welfare payments ahead of the World Cup and in anticipation of this October's elections. And last year, after millions took to the streets to protest a hike in bus fares and other systemic problems including a broken health care system, the government responded quickly, abandoning the fare increase, importing doctors from Cuba, and reserving oil money for education. But in his new book "Futebol Nation: The Story of Brazil Through Soccer," David Goldblatt describes that response as a half-measure, one designed to squelch the demonstrations. "It wasn't much, but it was enough to take the sting out of the movement," Goldblatt writes.

Ito echoed the idea that the government's response has been largely cosmetic. He mentioned two Brazilian aphorisms: tapar o sol com a peneira and leis para inglês ver. The first means to "cover the sun with the sieve." The second can be translated as "just for show for the English."

Still, Ito doesn't appreciate how his artwork has been used by conservative networks like TV Revolta to attack President Rousseff. He says the mural is a broader criticism of Brazilian society, and Rousseff — the chosen successor to populist President Luiz Inácio Lula da Silva — has done some good things for the poor.

Ito initially wanted to put the image outside of the 70,000-seat Itaquerão Stadium, the site of the World Cup opener. He later changed his mind, thinking that the school, in what he describes as a largely middle class part of Pompeia, was more appropriate. He says he did not want to place it in a poverty-stricken district, such as one of São Paulo's favelas, and that he has gone out of his way to avoid posting such images in those areas.

"Two years ago I painted in an [abandoned] building and I was thinking to paint something about poverty, but when I went inside I changed my mind," Ito told me. "They already live what I was supposed to paint." Instead, he said, in those cases he painted what the people asked him for: football team symbols, and SpongeBob SquarePants.