What began as a small initiative to try and involve refugee families in their children's schooling in Sydney's southwest has grown to include a small catering service and hub for information services. 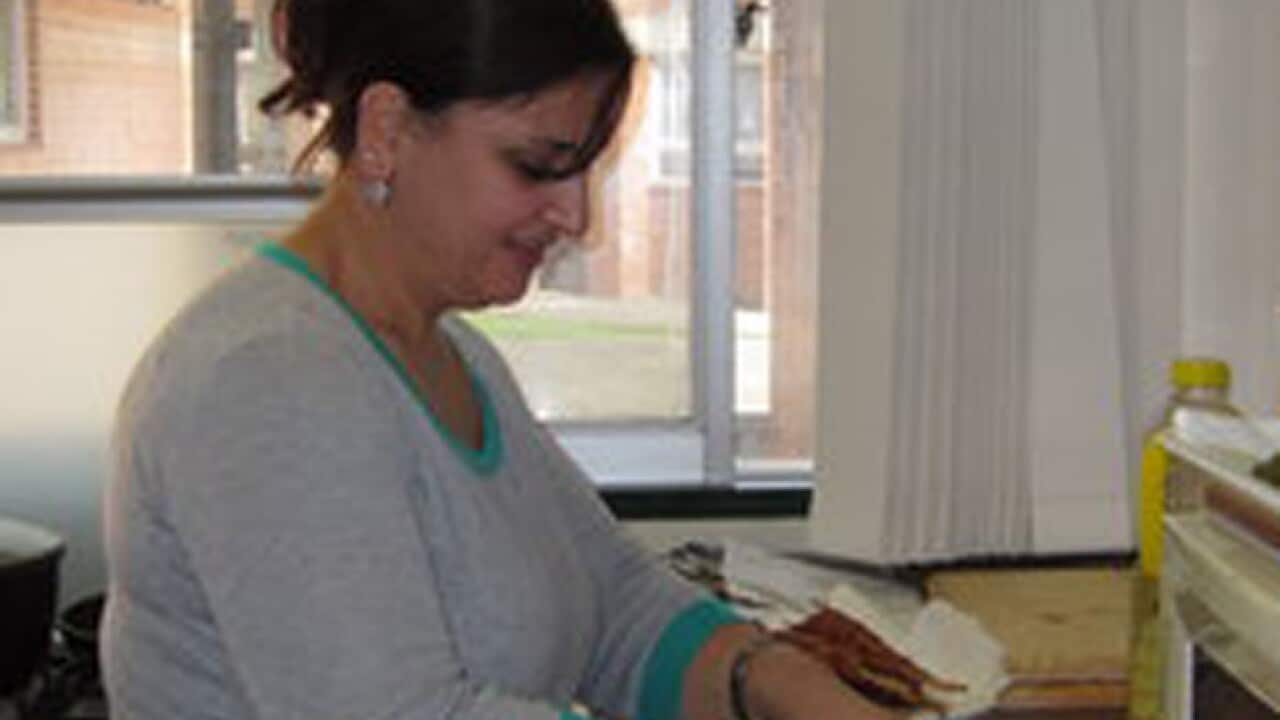 It isn't your typical cafe.

It started by just offering a cup of tea and a chat but now the Parents' Cafe is offering a whole lot more to refugees in Sydney's southwest.
Advertisement

What began as a small initiative to try and involve refugee families in their children's schooling has grown to include a community kitchen and garden, a small catering service and hub for education and information services.

And Fairfield High School's social inclusion program has also received widespread recognition, with the UNHCR describing it as a model for settlement best practice.

"We're currently in the teacher's common room but what we're having a look at is.. we're having a look at some of the parents from the parents' cafe preparing lunch for a couple of events that are going on at school. There's a group of parents who will be coming in to participate in some learning a little later on. What you're seeing here is, you're seeing our parents actually cooking a variety of their foods from their home country that they will be putting together as a meal to serve each of those groups a little bit later on today."

He's standing in the kitchen of Fairfield High School's Parents' Cafe - a government-funded initiative that tries to involve the parents in the school.

What started out as a weekly cup of tea at the school's Intensive English Language Centre has expanded into something beyond English classes.

"That's Indian biriyani, vegetarian and the other is not veg. This one is with meat, chicken, other stuff and we make the chicken it's called chicken tikka and other stuff is tandoori chicken also that we put in the oven and we make felafel, tabouli, some salad for the Parents' Cafe. I love cooking at that's why I do this. We're cooking every Thursday. We cook for the parents."

Asmaa Yousiff is a refugee from Iraq and she's been involved in the Parents' Cafe for four years.

So keen were the parents to expand their group beyond their weekly cuppa, that the idea for the Cafe was born.

While it's open to anyone, the Cafe primarily caters to refugee parents - many of whom are recent arrivals from Iraq and who have settled in Fairfield, a suburb in western Sydney.

In 2011 there were almost 3,500 refugee students in government schools in the local area, compared to 208 for the rest of Sydney.

The school's principal, Robert Mulas (moo-lass), identified a need to help connect refugee parents in the local community with their childrens' schooling - hence the birth of the Cafe in 2009.

"The original aim was to look at the needs of the parents from our intensive English Centre children, so these were parents and families. Obviously the children who had come from some other background probably from a camp, probably from overseas, probably correctly entered Australia, because we don't really enter into that debate our discussion and we thought that they needed extra support. Their children were being supported in the classroom with teachers in the Intensive English Centre but the parents needed extra support. So we employed a community liaison officer and we started a process of looking at a number of things which involved breakfast clubs for the kids, meetings for the parents and we said maybe we can do this better. And this concept of meetings came up and we needed to give it a name. There was a suggestion of calling it the Parents' Cafe - and not a cafe to teach them to make coffee but a cafe where they sat around in comfortable situations and discussed issues of concern."

The Parents' Cafe was formalised with the employment of a community liaison officer who works five days a week and the concept has expanded into southwestern Sydney to six other schools.

The Parents' Cafe was also profiled in a visit by Principal Robert Mulas in 2012 to the United Nations High Commissioner for Refugees' 60th anniversary meeting.

The head of UNHCR, Antonio Guterres, has praised the Parents' Cafe, calling it a good model for settlement demonstrating international best practice.

Haitham Jaju is the Community Liaison Officer at Fairfield High School and the Parents' Cafe coordinator.

The former Iraqi diplomat came to Australia as a refugee with his family after war broke out in Iraq.

He's put his diplomatic skills to good use in his new job - working to create networks between the school, the community and the government.

"For this term we are focusing on legal issues, family, current events like the election very soon. This session is one of our topics for this term, to give an idea especially for the new arrivals who are eligible now. They get citizenship, they're eligible to vote in the election. To have an idea of the process, what's going on, what's the differences between elections here and elections overseas. So when we have such people here they will clarify, they will ask questions on how to participate in this election."

This session is about voting in Australia.

Wafaa Yousiff, a refugee from Iraq, has been in Australia for two years and is a regular visitor to the cafe.

She says coming here is one of the highlights of her week.

"Here it's a wonderful group. Everyone here is like family. In Iraq I took everything and came here. And here I find it a big family. Everyone here just gives me love. That's it. They don't give me anything, just love. And I come here and I learn everything, especially learning English because you need it, you use if for everything, for shopping, for hospitals."

The school also has a large community garden growing staples such as tomatoes, cabbages and eggplants alongside more exotic fare such as turmeric.

The garden allows parents and students to gain qualifications in horticulture as well as supplying food for the cafe.

The Parents' Cafe has also set up a small-scale catering business.

Principal Robert Mulas hopes the programs initiated at the school will continue to be taken up elsewhere.

"The best case study I can give you is a mother in Australia for three days and on the third day she came to the Parents' Cafe, seeking assistance, information and help. A lot of our parents are single parents with maybe four, five, six children that they may have had to come through camps, a convoluted way to get to Australia. We do as much as we can. The Parents' Cafe has grown from what we could loosely call a social group to an information sharing group. Organisations want to come and talk to our parents. I think it shows massive success of what's started out as a support group that's now grown into a group that helps itself and works throughout the community and works with many other organisations. And I think that's the success of it and the success we can highlight to other schools in particular but other organisations that would like to involve the community."