Anaesthetists want the Victorian government to make 'fit testing' mandatory for safety wear as COVID-19 hospitalisations rise in the state. 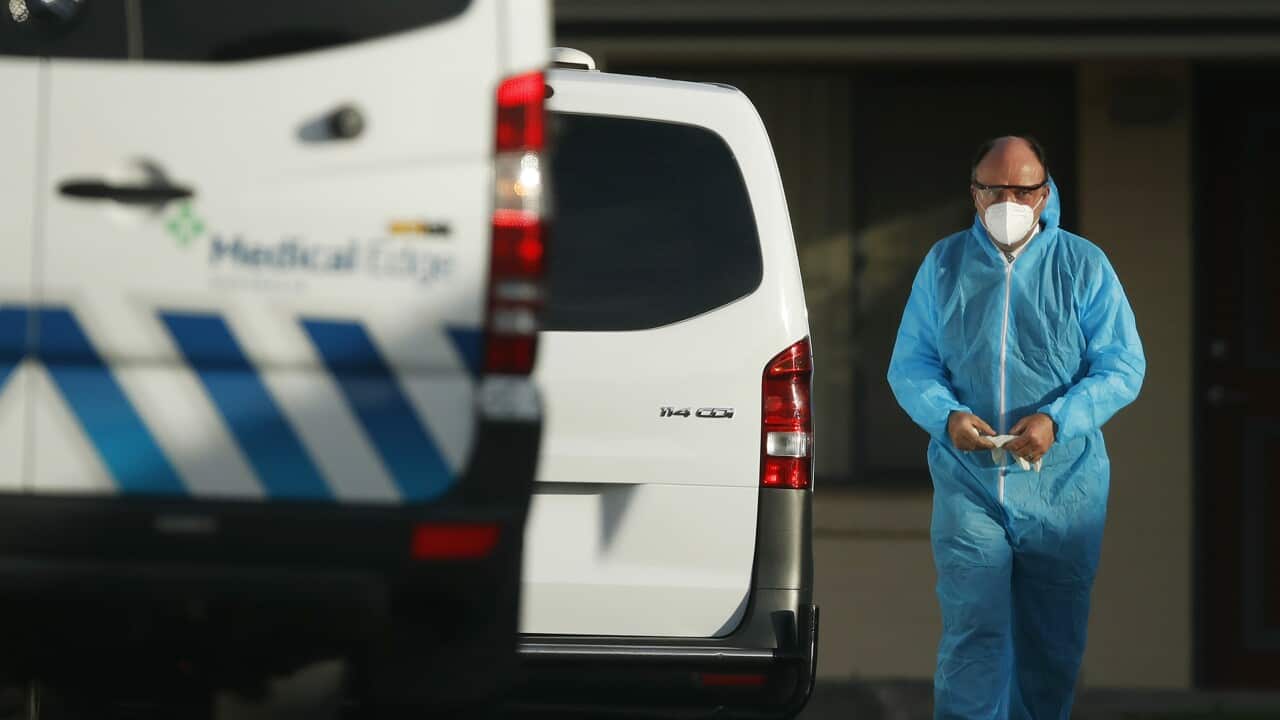 Personnel arrive to remove a body at St Basil’s Homes for the Aged in Fawkner, Melbourne, Friday, July 31, 2020 Source: AAP

Victorian anaesthetists are calling on the state government to enforce 'fit testing' for personal protective equipment, citing concerns that not enough is being done to protect health workers from coronavirus.

As Victoria
reached 5,743 active cases on Friday and deaths rose to 113
, three doctors were reportedly among those in intensive care.

As hospitalisations grow in the state, the level of infection risk and the effectiveness of PPE is worrying many.

Advertisement
Anaesthetists are commonly called on to intubate patients needing help to breathe, and so they are among those face-to-face with the most severe COVID-19 cases.

The Australian Society of Anaesthetists says it has made "numerous approaches" to federal and state health departments asking that fit testing of PPE become mandatory in all hospitals.

Fit testing involves checking whether airborne particles can penetrate an N95 mask and other safety gear.

One method involves spraying a solution at the face, which if able to be smelled or tasted, means the mask has failed.

A healthcare worker who has fit-tested their PPE knows exactly how they have to put it on to ensure maximum protection.

Ideally they can fit test with a variety of different sizes and brands of PPE so that they can safely work in any setting.

The ASA did some of its own fit testing and found that one third of the masks failed the first time.

Many anaesthetists in Victoria are currently seeking and paying for their own fit testing, the ASA said.

ASA president Dr Suzi Nou said federal and state health authorities had not been receptive to her recommendations for mandatory fit testing, despite the practice being widespread in other states.

"They'd say we don't have the resources," Dr Nou said.

She likened the lack fit testing to former attitudes to seatbelts, which are now universal.

A resident is removed from St Basil’s Homes for the Aged in Fawkner, Melbourne, Friday, July 31, 2020 Source: AAP

Some have questioned whether N95 and standard PPE is enough, or whether hazmat suits and powered air purifying respirators should become standard.

Bob Cox, a Melbourne anaesthetist with 40 years' experience, told AAP the astronaut-like suits seen on doctors fighting the pandemic overseas are ideal because they don't obstruct vision and are easier to work in because they can be comfortably worn all day.

"At the moment we're using equipment that is totally disposable but it has its limitations in that it may not be as safe," Dr Cox said.

"To have doctors ending up in intensive care on ventilators is not good, let alone anyone else."

Dr Nou calls the hazmat suit the "body condom" or the "full Wuhan" because that's what doctors were seen wearing where the virus first emerged in China.

She said every Victorian health service appears to be doing its own thing when it comes to those suits. Some hospitals have access to the suits while others do not.

"The concern that I have is that the guidance that's coming out doesn't recommend anywhere near that kind of gear," Dr Nou said.

She is critical of the Infection Control Expert Group - the body advising chief health officers and federal and state health decision-making.

"A lot of the medical profession ... really question some of the advice that's coming out," Dr Nou said.

Victoria's Department of Health and Human Services has been contacted for comment.