All over Cambodia people are embroiled in disputes over land that often pit the government and large companies against small rural communities who are unprepared for the David and Goliath battle they face. 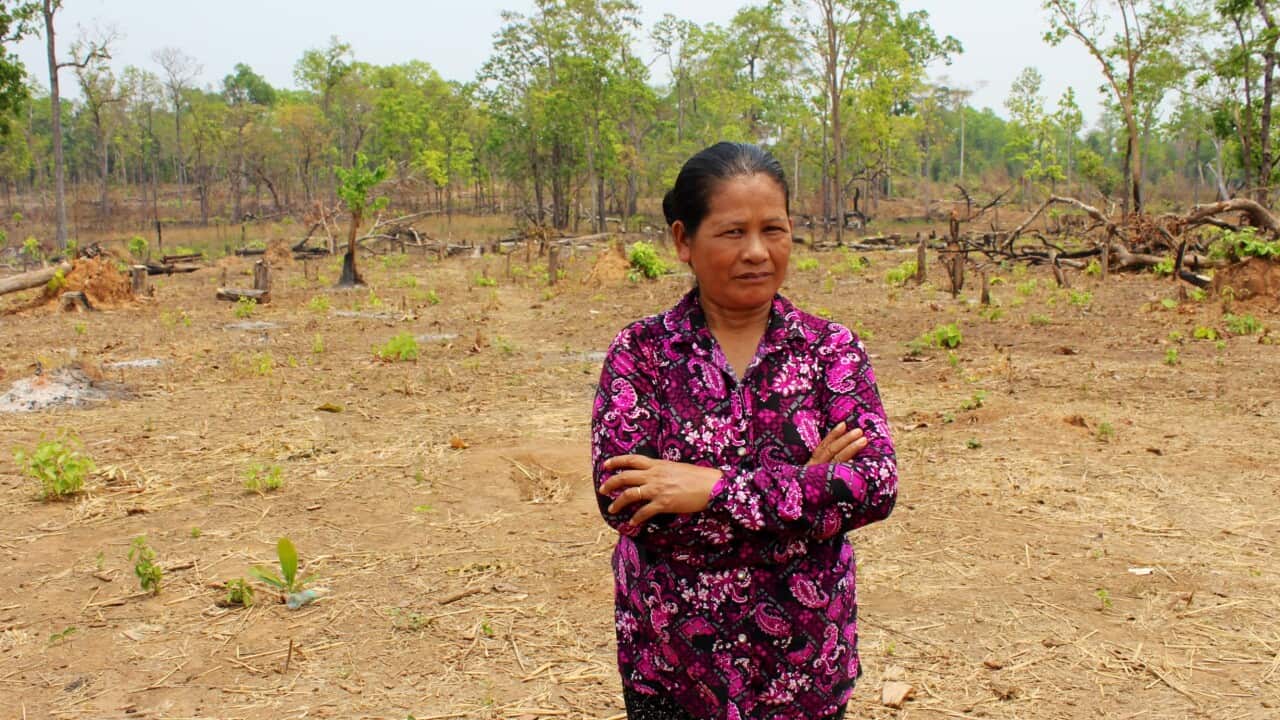 Meas Ren says she feels sorry for the families involved when she visits the cleared land. (Sarah Whyte)

Meas Ren is small in stature but has a firm, authoritative voice.

The 55-year-old Cambodian woman, from the Preah Vihear province in the country's north, has become the unofficial spokesperson for her village since an agriculture company began clearing large areas of farmland allegedly belonging to local families.

Speaking to SBS through an interpreter, she says she didn’t set out to be a leader but wanted to protect vulnerable people in her community who were up against a mammoth opponent.

Members of the community say rubber company
Seladamex
has so far cleared about 8000 hectares of land after it was handed over to the company by the Cambodian government as part of an economic land concession deal in 2011. SBS contacted Seladamex for comment but has not received a response.

On its website, the company says it plans to grow rubber across 10,000 hectares in the province, which will "help to create employment within the region as well as to participate in the development of the local economy."

It goes on to say: "Working hands-in-hands with the local farmers, Seladamex hopes to improve the lives of these farmers and help them to step out of the poverty cycle."

The community claims the company initially told them it would build a road in the area, which they were happy about, but instead began bulldozing the land they used to make a living.

Land disputes like this one are going on all over Cambodia, a country where
more than 80 per cent of the population lives in rural areas
, and claims of forced evictions and brutality are common.

In 2012, a 14-year-old girl was
shot and killed by police
after a long-running land dispute, and in the same year anti-logging activist Chut Wutty was
shot dead by police
as he was guiding journalists to the scene of apparent illegal logging.

The Cambodian government has a system of mapping the country's land to determine what is public and what is private, and granting economic land concessions - long-term leases - to companies for development. Cambodian human rights group
Adhoc
estimates
at least 2.6 million hectares
have so far been granted to companies under the scheme.

Where it gets tricky is when villagers say that land granted to companies belongs to them and they find themselves - and their homes - caught in the centre of a development that devastates their small farms and their way of life.

"If I sold the land, I'd have nothing." (Sylvia Varnham O'Regan)

Visiting the affected farmland in Ms Ren's community reveals a bleak sight. The hot, dry earth stretches far and wide, dotted with hollowed-out shacks and other remnants of the community's former life there.

Bulldozers are parked next to an office set up by the company. We are told it would be unsafe to get out and take photographs.

Ms Ren says the villagers are banned from being on the land because they no longer technically own it, but they ignore that.

And she doesn’t fear speaking out, even though she claims the company has been trying to find out who's leading the villagers' campaign.

"The company is looking for the 'mastermind', the leader," she says. "But the villagers say, 'There's no mastermind. There are only stomachs to be fed; only children'.

"[The company] doesn't care about the villagers' land. What they do in action is different to what they say. So they say they want to keep land for villagers but in action they don’t do that."

Many Cambodians don't hold official title over their land, in part because the country's land-titling system was abolished by the Khmer Rouge regime of the 1970s and private property ceased to exist.

Sokphea Young, who is doing his PhD on Cambodian land disputes at Melbourne University, says there is a system today to register land but both corruption and implementation is a problem so many people are left vulnerable and open to exploitation.

In 2001, the Cambodian government passed new laws that said for the government to sell or lease land it had to convert what’s known as “public state land” into “private state land".

The government was then able to grant economic land concessions - some leases for as
many as 99 years
- to companies for large amounts of private state land.

"They say they want to keep land for villagers but in action they don’t do that."

The law also allowed for villagers to apply for documents of land title if they could prove they had lived on their land for at least five years before 2001. But the process was expensive and many couldn't afford it, which was bad news for poor people living on desirable plots of land.

"Some of the villagers have documents from villagers or commune heads," Mr Young says. "But they are not sufficient."

'We don't kill them'

In February this year, Cambodian human rights group
LICADHO
released data showing there were three times as many land complaints in 2014 compared to as in 2013, with an estimated 10,000 families affected.

But government spokesman Phay Siphan says the numbers are actually going down.

Mr Siphan says the issue of land disputes is more complicated than it appears because many villagers move onto public land and then claim land rights.

He claims that whatever the situation the government treats people caught in the disputes with respect.

"We treat them as human beings. We don’t burn them down. We don’t kill them. We tell them, 'Please move away'."

At a village about three hours from Ms Ren's community locals show us a billboard that was put up four years ago by a Cambodian company. It says the company will build a school and a pagoda there.

The village sits next to a forest where the community produced fruit, honey and resin to sell to markets.

The company has since bulldozed large swathes of the forest to make way for a rubber plantation and wiped out the community's livelihood. The school and pagoda are nowhere to be seen.

One man shows us a mark on his leg that he says he got when fighting with officials over the forest. Others show us photographs of similar grazes and a video of a community centre allegedly being pulled down by officials from the Department of Environment.

In one photo, a man in uniform can be seen standing in the background as clearing takes place. A member of the community explains the man in the picture is a policeman. When asked how that’s possible he says, "the company is rich so they have the money to hire the police."

Community leader Sok Chhet says they feel powerless to get answers. They have so far filed a claim in court, contacted ministers and organised a public forum, but nothing has worked.

He says they have been been investigated by police and local government and unfairly branded as troublemakers.

"We are not doing anything, we are just claiming the land in the plan," he says. "We just want what has been mapped in the plan."

Villagers show photographs of injuries they say they got when fighting with authorities over the land. (Sylvia Varnham O'Regan)

When asked if using his identity will put him at risk, the old man shakes his head and smiles.

"You can take whatever. My clothes, whatever.

"Even though the company wants to kill me, I'm already 70 years old.

"I'm doing this for the next generation."