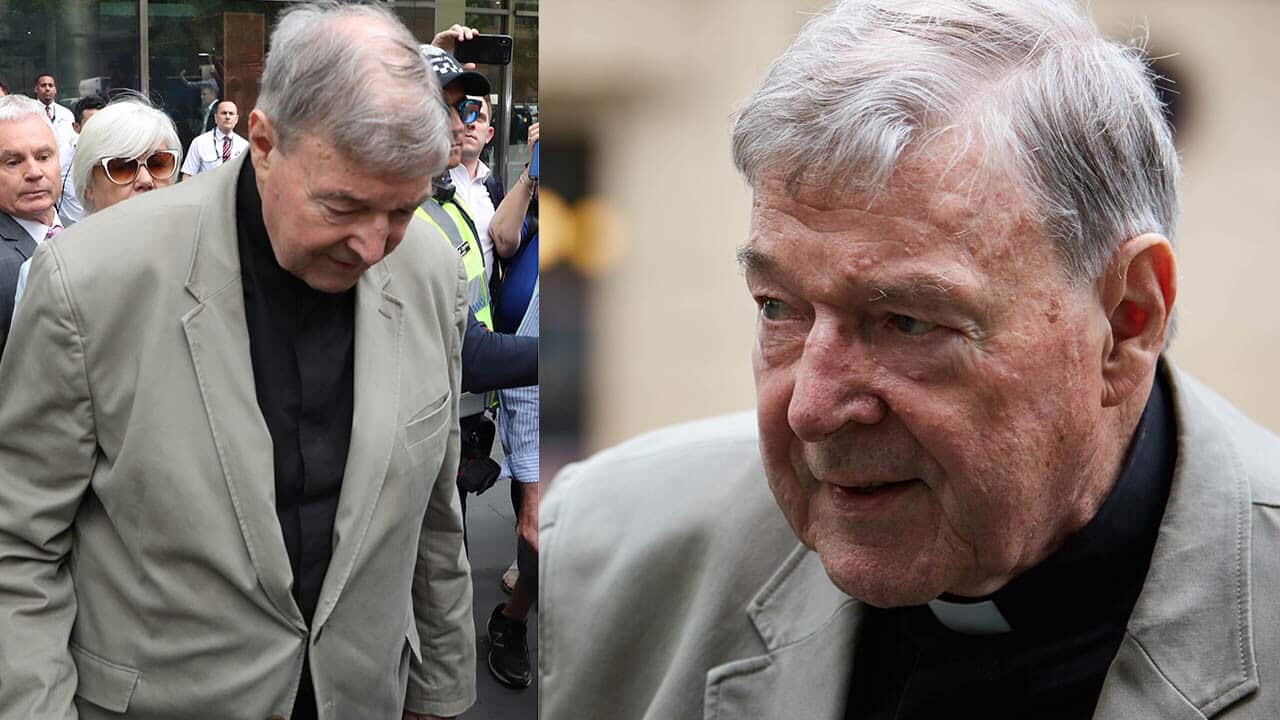 His victims were two 13-year-old boys on scholarships to the prestigious St Kevin's College.

Cardinal George Pell, has been convicted of sexually abusing two choirboys in 1996 when he was Archbishop of Melbourne. Source: AAP

Advertisement
The pair "nicked off" after a Sunday solemn mass in late 1996 and were caught swigging sacramental wine in the priest's sacristy by Pell, newly installed as Archbishop of Melbourne.


Pell scolded them, exposed his penis from beneath the ornate ceremonial robes, and molested them.

A Melbourne jury in December found Pell guilty of five charges - one of sexually penetrating a child and four of committing indecent acts with children.

Pell pushes through the media pack outside court. Source: AAP

That verdict was made public on Tuesday after months of procedural secrecy, and the abandonment of a second trial over allegations Pell indecently assaulted boys in Ballarat in the 1970s.

Pell has maintained his innocence over all allegations and has lodged an appeal of his conviction.

"An appeal has been lodged against his conviction and he will await the outcome of the appeal process," a statement for the cardinal reads.

A suppression order preventing news of the case being published was lifted on Tuesday.

One of the victims, now in his 30s, brought the allegations to police after years of having struggled to understand what he'd experienced.


A month or so after he was abused  by Pell he was sexually assaulted again, pushed against a cathedral wall by the now-Cardinal who fondled his genitals.

Pell's other victim died in 2014 in accidental circumstances.

In a statement issued by his lawyer on Tuesday, the surviving victim noted the stressful and ongoing legal process.

"Like many survivors I have experienced shame, loneliness, depression and struggle," he said.
Emotions were high outside as Pell left, with one spectator yelling he hoped the cardinal "burned in hell". Source: AAP

"Like many survivors it has taken me years to understand the impact upon my life.

"At some point we realise that we trusted someone we should have feared."

The media scrum outside the court as Pell leaves. Source: AAP

Top defence barrister Robert Richter QC represented Pell in the trial, and during an earlier trial in which the jury was discharged after failing to reach a verdict.

Mr Richter failed to convince the latest jury that the cathedral's processes were so seamless that two boys simply could not have "nicked off" unseen.

He argued the allegations were a "far-fetched fantasy", that Pell was always accompanied after mass and that the cumbersome robes would have prevented him revealing his genitals.

"Only a madman would attempt to rape boys in the priest's sacristy immediately after Sunday solemn mass," he told the jury.

Pope Francis has been widely criticised for being long on talk and low on change. Source: AAP

Pell, who was physically ailing during the trial and on crutches before a double knee replacement over Christmas, remains on bail.

He's due to return to the County Court for a plea hearing on February 27.

Chief Judge Kidd is due to sentence him in March.

"You're going to burn in hell. Burn in hell, Pell," a man yelled at the cardinal as he walked from court.