Carriageworks staff members have allegedly been told to leave work if they continue to wear the badges, which is part of a silent protest against Sydney Festival. 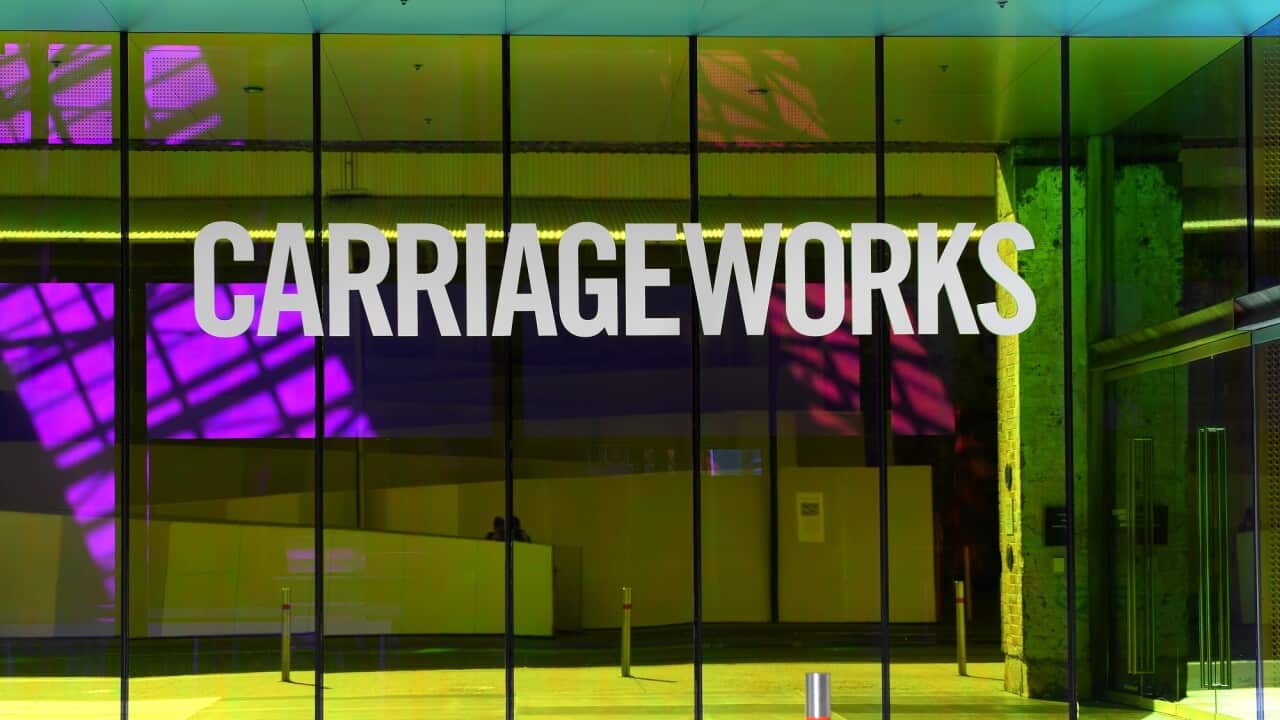 The Carriageworks arts venue will be showcasing several installations and performances for Sydney Festival. Source: AAP

Dozens of Carriageworks staff have allegedly been intimidated by management after engaging in silent protest against Sydney Festival by wearing badges in solidarity with the Palestinian struggle.

Sydney Festival has come under fire for accepting a $20,000 sponsorship deal with the Israeli embassy, a deal shunned by Palestinians and allies that has caused artists and organisations to pull out of the festival program.

Carriageworks, the venue for several installations and performances that premiered under the program, had been confronted by staff, expressing their discomfort to work for the event.

Advertisement
Charlie Jamieson* and their colleagues began to wear badges designed on cardboard to wear while working at Carriageworks, in an act of support for Palestinians.

Badges worn by Carriageworks staff had "Free Palestine Movement" symbols and keffiyeh prints, which is a symbol of Palestinian identity. Source: Supplied/Charlie Jamieson

But they and 25 other peers began to receive pushback from chief executive Blair French, who told staff in emails sent on 12 and 18 January that the wearing of badges would not be accepted.

"I need to make clear that it is not acceptable for the protest badges in question to be worn on Front of House duty and serving the visiting public. Employees will be asked to remove them," his email read.

Mx Jamieson said many staff members felt threatened by the emails - seen by SBS News - and came to work without the badge in fear of being suspended or fired.

But they said their concerns were alleviated after a statement released by the arts union, Media Entertainment and Arts Alliance, supporting staff members.

"It is frequently the case that arts workers express their support for and solidarity with causes that align with their values," the statement said.

"MEAA supports the right of our members to express their personal views in this way in the course of their employment.

"This is part of the rich mix of expression and exchange in a vibrant creative community."

After returning to work last Thursday wearing the badge, Mx Jamieson said they were confronted by a senior staff member twice - in what they described as intimidating encounters - to take the badge off.

They alleged they were given an ultimatum: take the badge off and continue working or go home and Carriageworks would pay them for a complete shift.

Other staff members were also pulled aside individually to take their badges off too.

"The individual intimidation was really confronting ... specifically pulling people aside on their own and telling them to take off their badges."

Mx Jamieson said the response by Carriageworks was "disappointing" and "disingenuous".

"Carriageworks artist-led program is ambitious, radical and always inclusive," was one of the values Mx Jamieson referred to, which is published on the Carriageworks website.

"We felt really misled and let down by that, and we feel like there should be more responsibility," they said.

"Wearing a badge was our way of claiming power in our vulnerable position as casual staff and protesting Sydney Festival’s artwashing. Being visible in our stance was vital in making our protest impactful."

Seven staff members have reportedly cancelled all of their shifts at Carriageworks for the entirety of Sydney Festival as a form of boycott against associations with Israel and an act of solidarity for Palestinians.

Sydney Festival's $20,000 sponsorship from the Israeli embassy was in support of Sydney Dance Company's production of Decadence, created by Israeli choreographer Ohad Narin.

The sponsorship deal was shunned by Palestinians and allies who triggered
a campaign for artists and spectators to boycott
the festival in December 2021 as part of the Boycott, Divestment and Sanctions movement (BDS).

Last year, Human Rights Watch labelled Israel's treatment of Palestinians
as a form of apartheid
, something the state has strenuously rejected.

Now, more than 40 per cent of the festival's performances have been disrupted after more than 100 artists and organisations pulled out of the program.

In the email, Mr French told his staff that the venue is "neither endorsing the Sydney Festival's decision regarding funding sources nor opposing the boycott movement".

"We are maintaining a position that supports the individual decision-making of artists and independent companies."

He cited Carriageworks' code of conduct that states employees have the right "to make public comment and enter into public debate on political and social issues".

He said this right is forfeited if the public debate in a private capacity "gives rise to public perception that it is in some way an official comment of Carriageworks".

"As front of house employees, you are required to wear a Carriageworks badge. When interacting directly with the public you are representing the organisation."

Federal Arts Minister Paul Fletcher lashed out at the boycott last Friday, describing the organisers as "useful idiots" who are engaging in "political censorship".

“If you want Australia’s arts and entertainment sector to be vigorous, life-filled, provocative and creative, this month’s boycott of the Sydney Festival was a depressing spectacle," he wrote in an opinion piece published in The Australian.

“If arts festivals are required to conform to a political orthodoxy then the first casualty will be the quality of what is programmed. The second casualty, of course, will be the audience experience,” he wrote.