The Tianjin outbreak poses risks to Beijing and the upcoming Winter Olympics, because of the large number of commuters working and living in the two cities, according to the Global Times. 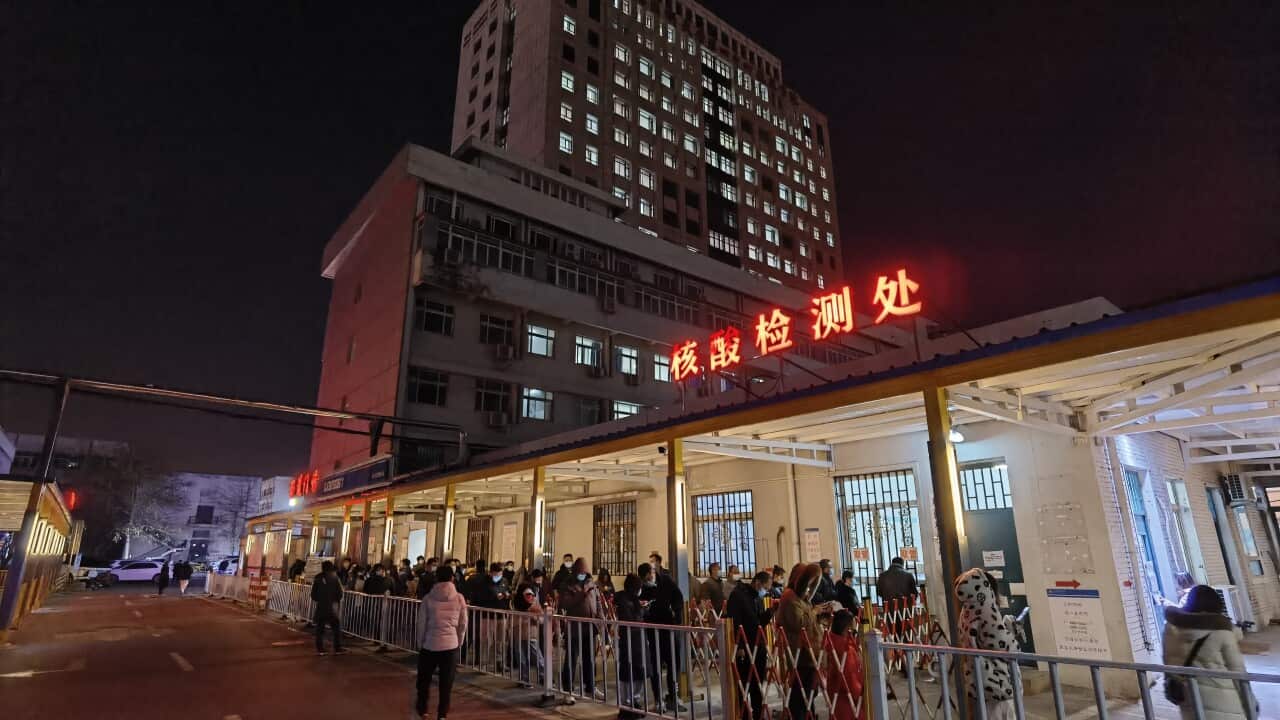 People stand in a queue to receive a COVID-19 nucleic acid test at the testing site in Tianjin 4th Center Hospital on 8 January, 2022 in Tianjin, China. Source: Getty

The northern Chinese city of Tianjin on Sunday advised its nearly 14 million people to stay home while it conducted mass COVID-19 testing after a spate of recent cases, including two caused by the Omicron variant, state-controlled media reported.

Tianjin emerged as a new area of concern after more than 20 COVID-19 cases were reported there in the last few days, most of them imported from abroad, according to the National Health Commission.

They include at least two cases of the Omicron variant, as well as 15 infections among elementary and middle school students, according to various state media reports.

The city near the capital Beijing launched its mass testing early Sunday, advising residents to stay at or near home to be available for the community-level nucleic-acid screening.

So far, however, no larger lockdown order was seen.

Chinese authorities have already been struggling with a larger outbreak centred on the northwestern city of Xi'an that has sparked questioning of the country's zero-tolerance policy of strict lockdowns and immediate mass testing to curb outbreaks.

China, where the coronavirus was first detected in 2019, has thus far reported only a handful of Omicron cases.

Tianjin residents have been told that until they obtain a negative test result, they will not receive a "green" code on smartphone Covid-tracing apps that nearly all people in China are now required to present when using public transport and in other situations.

Tianjin is a major port city about 150 kilometres southeast of Beijing.

Officials have faced complaints from Xi'an residents over chaotic handling of the lockdown, including poor access to food and daily essentials, and viral cases such as a miscarriage suffered by an eight-month pregnant woman who was refused entry to a hospital without a Covid test.

China's government has touted its initial strict response to Covid, which has largely brought the pandemic under control within its borders, as preferrable to sometimes lax and chaotic measures overseas.

China is hewing strictly to the zero-tolerance approach as outbreaks continue to emerge in the run-up to next month's Beijing Winter Olympics.

China's official tally since the start of the pandemic - just over 100,000 Covid cases - is a fraction of the record one million cases logged by the US in a single day earlier this month.

Cases from China's chaotic initial outbreak in Wuhan in early 2020, however, are widely believed to have been under-reported.