The Tuvalu prime minister called for the UN General Assembly to ensure nations stick to the Paris climate accord or his nation will face "dire" consequences. 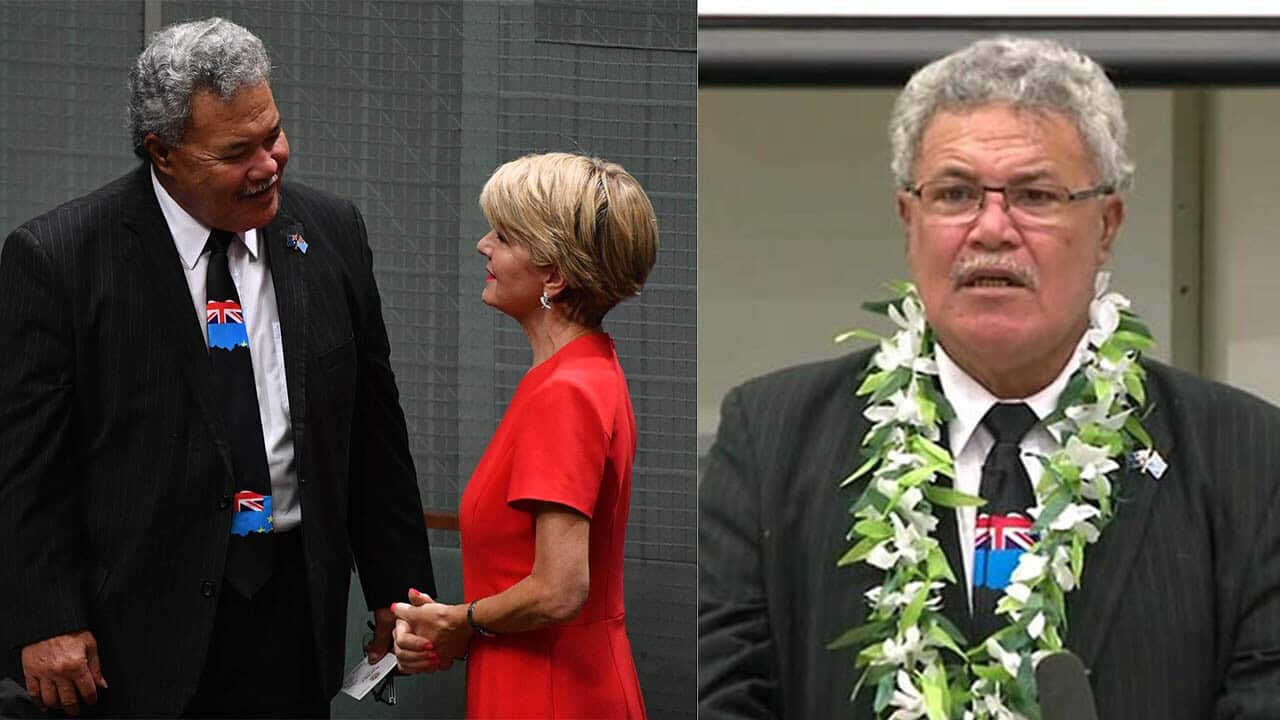 Mr Sopoaga has called for urgent climate change negotiations ahead of the UN summit in Poland, where many at-risk nations are expected at COP24 talks.

"It is very evident that climate change represents the single greatest threat to the livelihoods of the people living on low-lying, vulnerable countries; their security, long-term sustainability and well-being," he told a meeting in Canberra on Monday night.

Advertisement
"We have tidal records going back many decades and it is clear from these records that the sea is rising around Tuvalu."

Mr Sopoaga said the biggest immediate threat to his tiny nation, which comprises of nine small islands in the southwest Pacific Ocean, is storm surges.

The prime minister recalled the terrifying damage of Tropical Cyclone Pam in 2015, which devastated the small islands of Tuvalu and Vanuatu.

"We are confronted with waves, which are three to seven metres high. The highest point of our entire country is only four metres above sea level. You can only start to imagine the effects of such a storm and those surges on the livelihoods of our people," he said.

"Waves surged across the entire islands and thankfully no lives were lost. But the damage to crops, to food crops, to houses, livestock and infrastructure were enormous."

Mr Sopoaga went on to address claims it would be cheaper to relocate residents of small low-lying islands away because of climate change.

"This is not on, it is not on the agenda of the people of Tuvalu. They want to continue to stay and save their future," he said.

Mr Sopoaga said after his short visit to Australia he was off to Poland to join other nations' leaders and discuss the promises agreed in the 2015 Paris climate accord.

He said it was essential nations stuck to the agreement to limit global temperature rises to below two degrees Celsius, or the situation would become "dire" for Tuvalu.

Delegates from almost 200 countries now have two weeks of negotiations to finalise how those goals work in practice, even as science suggests the pace of climate change is rapidly outstripping mankind's response.

But US President Donald Trump's decision to withdraw from the Paris accord has dented trust among vulnerable nations, who fear there is not enough cash available to help them adapt to our heating planet.

The World Bank on Monday announced $200 billion (175 billion euros)
in climate action investment for 2021-25 -- a major shot in the arm for green initiatives but one which needs bolstering by state-provided funding.

The background to Monday's summit could hardly be bleaker: with just one Celsius of warming so far Earth is bombarded with raging wildfires, widespread crop failures and super-storms exacerbated by rising sea levels.

"A failure to act now risks pushing us beyond a point of no return with catastrophic consequences for life as we know it," Amjad Abdulla, chief negotiator at the COP24 for the Alliance of Small Island States, said.

The UN's own expert climate panel in October issued its starkest warning to date.

To have any hope of reaching the 1.5C goal by the end of the century, it said emissions from fossil fuel use must be halved by 2030.

Poland is one of many nations heavily reliant on coal, and wants this round of talks to reflect the role fossil fuels play in its economy.

It will unveil a declaration calling on states to "recognise the challenges faced by sectors, cities and regions in transition from fossil fuels... and the importance to ensure a decent future for workers impacted by the transition."

Mohamed Adow, climate lead for the Christian Aid charity, said richer nations needed to stump up the cash to allow developing countries to make the leap to renewables.

"Trudging along the dirty development path trod by richer countries will see developing nations stuck in the past and pollute their environments while ruining efforts to limit global warming," he said.

For some nations, the time to adapt to the effects of climate change is already here.

Frank Bainimarama, Prime Minister of Fiji and president of last year's COP, said Poland's submission must result in "a just transition for everyone, especially the most climate vulnerable."

The UN's General Assembly chief Maria Espinosa said the choice between the climate or jobs was false.

"Societies need to adapt, they need to understand, otherwise we will be in deep trouble, what is at stake now is the very survival of humankind and of the planet," she told AFP.

Poland has already come in for criticism after it announced three state-run coal companies were sponsoring the two-week negotiations.

Patti Lynn, executive director of the Corporate Accountability campaign group, called for nations to agree to the global greenhouse gas drawdown upon which the fate of the Paris agreement now rests.