Clinton, Sanders clash over capitalism, gun control at US debate 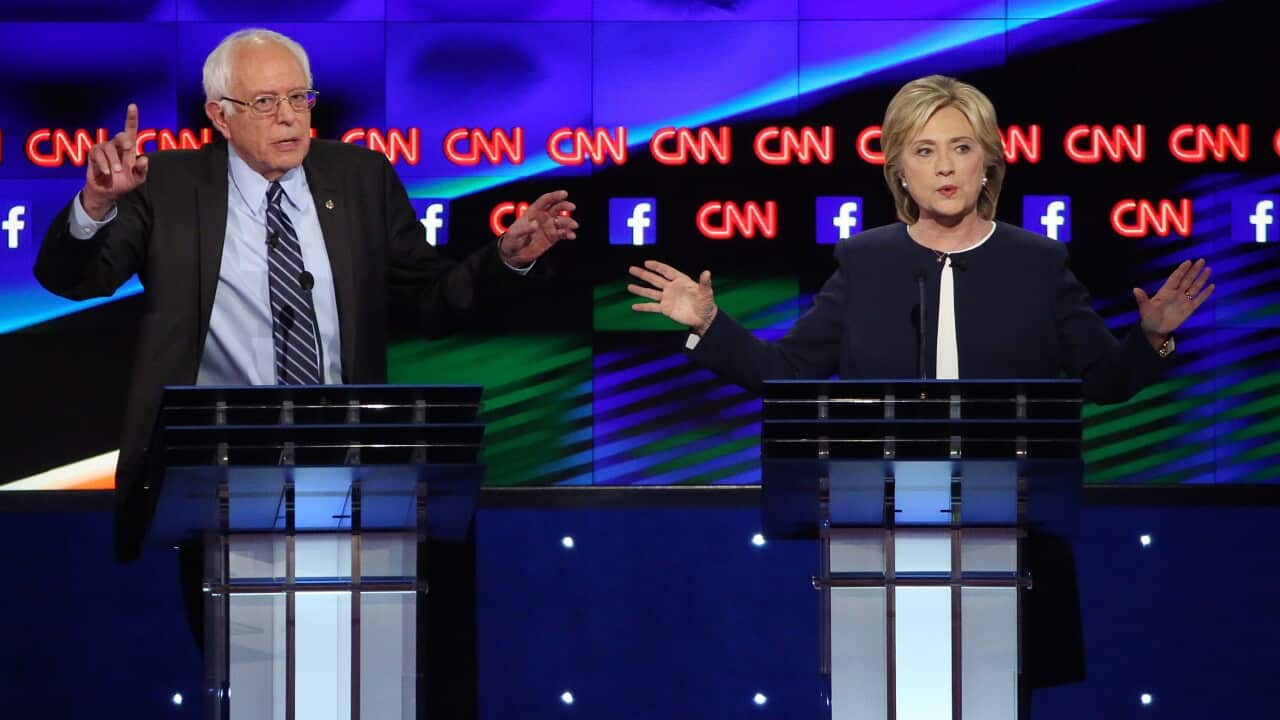 Democratic presidential candidate Hillary Clinton won unexpected support from chief rival Bernie Sanders on Tuesday for her use of a private email server as U.S. secretary of state, helping to defuse an issue that has overshadowed her campaign.

Echoing comments she has made before, Clinton said her decision to not use a government email address was a mistake, but she emphasized that she wanted to focus her energy on policy issues that were more important to voters.

Sanders came to her aid. “Let me say something that may not be great politics, but I think the secretary is right," he said. "The American people are sick and tired of hearing about your damn emails.”

"Thank you, Bernie," she said, smiling broadly and shaking hands warmly with the U.S. senator from Vermont amid enthusiastic applause.

Sanders' "damn emails" statement was the top social moment of the two-hour debate on Facebook and Sanders himself was the candidate most discussed on the social media network, according to Andy Stone of Facebook.

Shortly after that moment of warmth, Clinton and Sanders clashed over their views about Wall Street, following earlier dust-ups over capitalism, gun control, and U.S. policy on Syria.

Sanders knocked the administration of President Bill Clinton, the front-runner's husband, for its de-regulation of Wall Street in the 1990s.

Clinton said the United States needed to do more than focus its fire on big banks.

"We have work to do. You’ll get no argument from me. But I know if we don’t come in with a very tough and comprehensive approach, like the plan I’m recommending, we’re going to be behind instead of ahead," she said.

Sanders, 74, is polling ahead of Clinton, 67, in the early voting state of New Hampshire and drawing large crowds at campaign events nationwide.

Clinton, who is trying to slow Sanders' momentum, directly attacked him for saying the United States should model its economy after European countries such as Denmark, Sweden and Norway.

"I think what Senator Sanders is saying certainly makes sense in the terms of the inequality that we have. But we are not Denmark. I love Denmark. We’re the United States of America," Clinton said.

Sanders, a self-described "democratic socialist," said he did not subscribe to the capitalist system.

“Do I consider myself part of the casino capitalist process by which so few have so much and so many have so little, by which Wall Street’s greed and recklessness wrecked this economy? No, I don’t,” he said.

The two candidates also clashed over gun violence, an increasingly potent issue in the election after repeated school shootings across the country.

Clinton said Sanders had not been tough enough on the issue and said he had voted against a provision that would have held gun manufacturers more accountable.


Sanders has pushed for what he calls a sensible approach on gun control and voted against the 1993 Brady handgun bill that Bill Clinton signed into law.

Asked to defend himself, Sanders said he supported the expansion of background checks for people wanting to buy guns and to scrap gaps in the law that make it easier to sell and buy guns at gun shows.

The two leading candidates were joined by former Rhode Island Governor Lincoln Chafee, former Maryland Governor Martin O'Malley and former U.S. Senator James Webb of Virginia in the first of six scheduled debates in the race to be the party's nominee in the presidential election.

The lesser known candidates made veiled attacks on Clinton. Chafee noted he had "no scandals" during his political career; Webb said he was not co-opted by the political system.

Clinton's email troubles have hurt her in opinion polls and given fodder to the slate of Republican presidential candidates who would like to be her rival in the November 2016 general election.

She has said her email server in her New York State home was used for convenience and not to skirt transparency laws.

The Federal Bureau of Investigation has taken the server and other computer hardware to determine whether sensitive government information was mishandled in Clinton’s email correspondence.

Chafee, who has been critical of Clinton in the context of the emails, said that it was important that the next president adhere to the best in ethical standards.

Asked by the moderator if she wanted to respond, Clinton answered, to applause, with one word: “No.”

One person who was not on the stage but loomed in the background of the debate: Vice President Joe Biden, who is considering launching his own run for the nomination.

Clinton was in favor of the raid. Biden advised against it.

Near the end of the debate, CNN moderator Anderson Cooper quoted the late U.S. President Franklin Roosevelt as having said, "I ask you to judge me by the enemies I have made."

"You've all made a few people upset over your political careers," Cooper said to the five Democratic hopefuls. "Which enemy are you most proud of?"

"Well, in addition to the NRA (National Rifle Association), the health insurance companies, the drug companies, the Iranians, probably the Republicans," Clinton said.

One person who was not on the stage but loomed large over the debate: Vice President Joe Biden, who is considering launching his own run for the nomination.

The televised encounter comes at a critical time for Clinton, whose once overwhelming lead among Democrats in polls has slipped amid questions about her use of a private email server instead of a government account when she was the top US diplomat.

The lesser known candidates made veiled attacks at Clinton at the top of the debate. Chafee noted he had "no scandals" during his political career; Webb said he was not co-opted by the political system.

In response to Sanders' success, Clinton has taken stances on several key issues recently that align her with the left wing of the party.

She reversed course to announce her opposition to the 12-nation Trans-Pacific Partnership trade deal that she had praised when she was secretary of state, and she rejected the Keystone XL pipeline that she had said in 2010 she was inclined to approve. Sanders is a longtime opponent of both projects.

Sanders, who has repeatedly refused to directly attack Clinton, signaled over the weekend he would make an issue in the debate of Clinton's tardiness in embracing liberal positions on some of those topics, noting he opposed Keystone and the TPP "from day one."

Some subtle policy differences remain between the two top Democratic contenders. Sanders has discouraged Super PACs from raising funds on his behalf, warning of the influence of corporate money. Clinton is backed by several Super PACs.