China's state-owned media remained almost completely silent on the anniversary of the Sino-Vietnamese War, which ended with no clear victor. 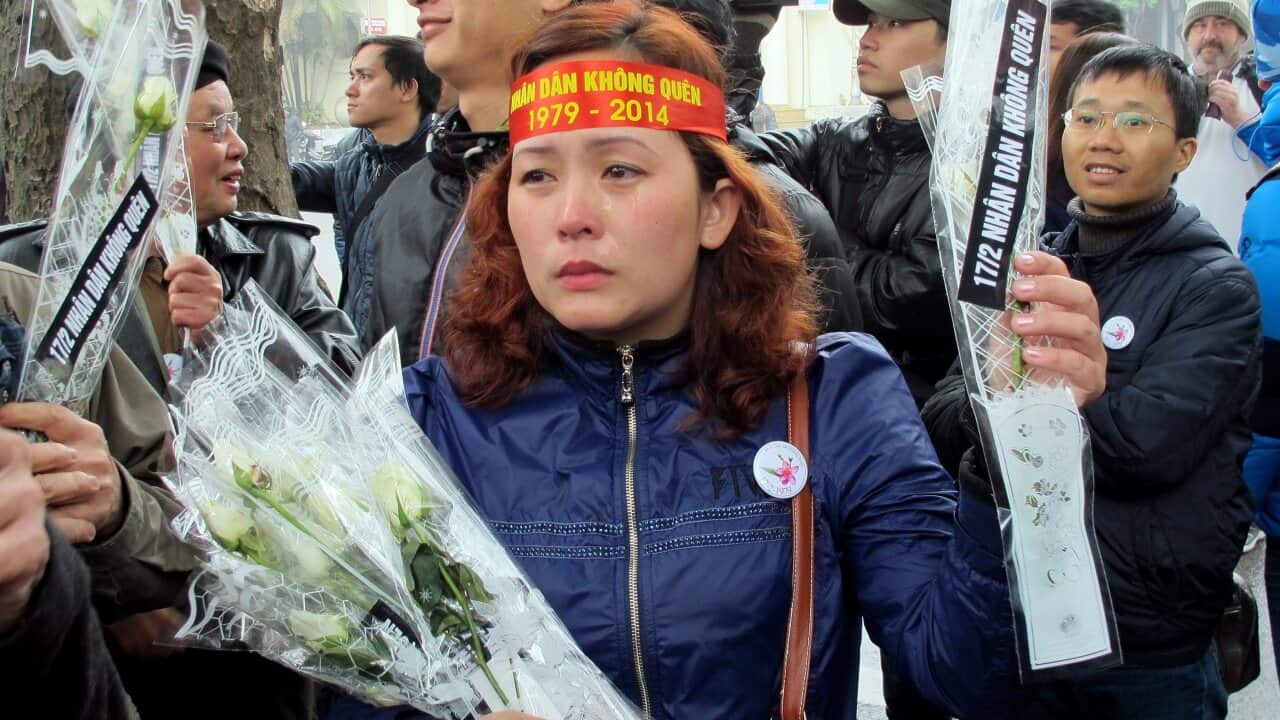 A woman cries as she holds white roses during a rally which marks the 35th anniversary of the border war with China, at Hoan Kiem lake in Hanoi, Vietnam. (AAP)

HONG KONG — On Monday, the 35th anniversary of the Sino-Vietnamese War, Chinese online news portal Sina released a patriotic slideshow of historical photos to commemorate the date. The text accompanying the images called the war the Defensive Counterattack War Against Vietnam, its official name in China, and insisted that "Vietnamese forces repeatedly provoked" their Chinese opponent. But the article is noteworthy not for what it says, but that it existed at all. The images attracted more than 8,400 shares and 1,800 comments on Sina Weibo, China's popular microblogging platform, with one young woman wondering why Chinese mainstream media "almost never mention this period in history."

She was not exaggerating: China's state-owned media remained almost completely silent on the anniversary of the nearly month-long conflict, which ended with no clear victor, and was the most recent war fought by China. (The war began after Deng Xiaoping, China's then-paramount leader, promised the newly friendly United States that he would "spank" the Soviet-backed Vietnamese regime for sending troops to Cambodia to topple the genocidal Khmer Rouge government.) Recent articles on Vietnam in People's Daily, the Chinese Communist Party mouthpiece that essentially declared war on its southern neighbor with an editorial on Feb. 16, 1979, lacked any mention of the conflict.

A Jan. 21 People's Daily article about anti-Chinese feelings in Vietnam avoided mention of any armed tussle between the two countries in the late 20th century, instead blaming the negative sentiment on Vietnamese's "sour" and "contradictory" attitude toward historical Chinese cultural influences and current economic dominance. Another People's Daily piece from Feb. 13 profiled the bustling town of Mong Cai on the eastern Chinese-Vietnamese border, which cleared over $2.6 billion worth of import and export goods in 2013, without mentioning that it was the scene of fierce fighting 35 years ago.

Advertisement
But Chinese military enthusiasts, armchair historians, and veterans have not forgotten about the war. Hot debates about the conflict still rage on in corners of the Chinese Internet, notwithstanding official silence. Many Internet users commenting on the war see China's casus belli as illegitimate, even as they honor the departed young combatants -- thousands of Chinese died, though the exact numbers are unknown -- who netizens feel were sent into a proverbial meat grinder. One user asked whether it was worth it to "sacrifice so many young lives to support the Khmer Rouge butchers." Another remembered feeling excited as a high school boy listening to the radio as shelling began, but continued, "looking back, the war was totally unjustified." For their part, ardent nationalists writing on Chinese social media often downplay China's relationship with the Khmer Rouge, and instead attribute the casus belli to Vietnam's poor treatment of ethnic Chinese living there, its alleged provocations along shared borders with China, and possible expansionist tendencies to consolidate Cambodia into a greater power in Indochina under the USSR's backing. "What's justice?" one nationalist asked rhetorically on Sina Weibo. "Whatever protects our motherland's interests is justice!"

Vietnam also suppresses memories of the war. The Vietnamese government Monday deployed aerobic dancers to break up anti-Chinese protests in the capital city of Hanoi, while on Feb. 12 U.S. outlet Voice of America quoted an anonymous senior Vietnamese editor as saying the country's watchdog issued "confidential instructions" to restrict coverage of the 35th anniversary of the war. China and Vietnam normalized relations in 1991 after the collapse of the USSR -- Communist Vietnam's longtime patron -- and Vietnam's withdrawal from Cambodia. Bilateral trade and economic cooperation have boomed since then, though tensions have risen recently because of territorial disputes over the Paracel and Spratly Islands in the South China Sea.

Many Chinese media outlets covered the anti-Chinese protests in Vietnam, but not that of Chinese Vietnam war veterans agitating for compensation. On Feb. 13, one Weibo user posted photos of a group of veterans holding up flags in Foshan, a large city in southern Guangdong province, wrote that police had kept close watch on participants, which he claimed numbered more than 1,600. According to a blog post written by a self-identified Beijing reporter and posted on Sina, a few dozen veterans gathered in front of a government building in central Hunan province on Feb. 17, complaining that they had been "abandoned" and shortchanged in veterans benefits. The blog post also shows a banner, with sadly ironic text. "The martyrs who gave their life defending their sacred territory," it reads, "will never be forgotten."

Lu is the co-founder of Tea Leaf Nation.