Comment: How media reports affect trans people, and what should be done

Yesterday, the Courier-Mail put the gruesome murder of Indonesian transwoman Mayang Prasetyo, killed by her partner Marcus Volker, on its front page. The article is breathtaking in its prurience and voyeurism. 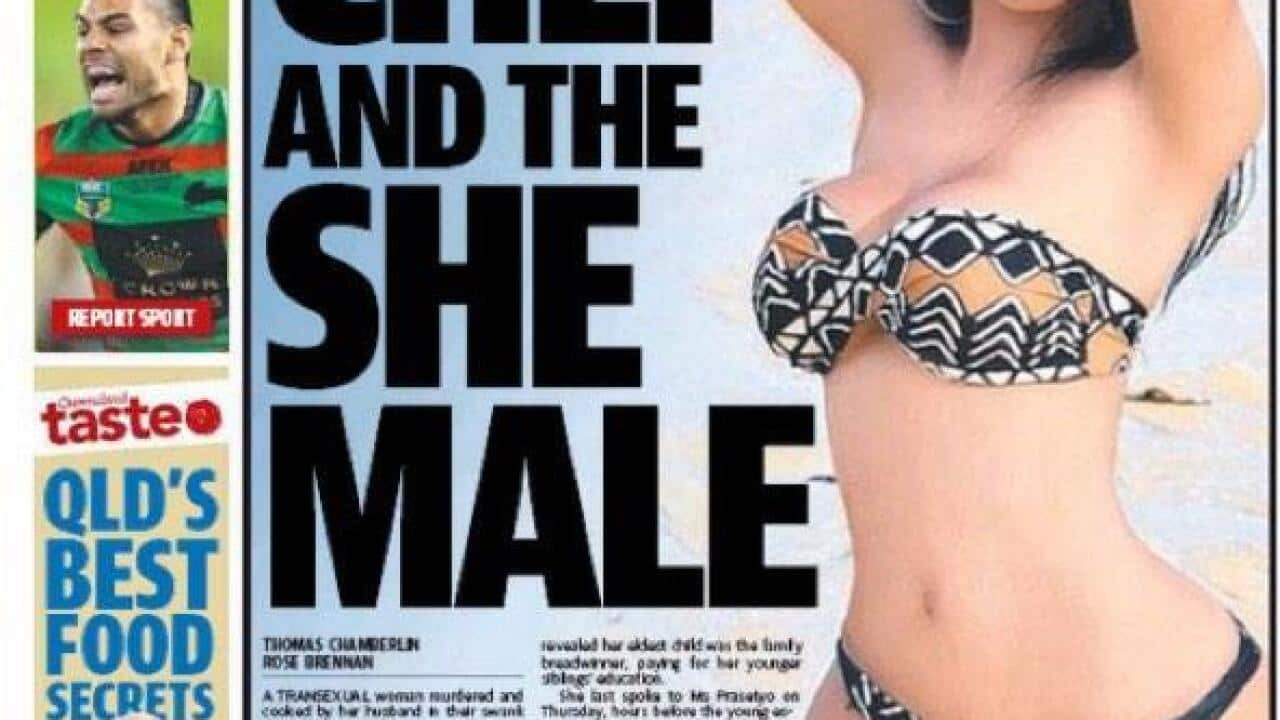 Yesterday, the Courier-Mail put the
gruesome murder of Indonesian transwoman Mayang Prasetyo
, killed by her partner Marcus Volker, on its front page. The article is breathtaking in its prurience and voyeurism. Even though Prasetyo was murdered and dismembered, the Courier-Mail deemed it appropriate to include a succession of photos of a seductively-posed Prasetyo in a bikini.

The article manages to imply both Prasetyo’s culpability in her own death – repeatedly pointing out both her transsexuality and sex work – and to sexualise her: though only after playing that old Fleet Street trick of flagging readers to her pre-operative status.

Advertisement
After realising that perhaps they had gone a little too far, The Courier-Mail ran with a marginally less provocative headline in its online edition
here
; though of course still focusing on Prasetyo’s sex work and swimwear. It’s hardly standard for murder victims to be shown posing in a swimsuit.

The article has caused national outrage and in less than 24 hours writers at
Guardian Australia
,
The Age
and the
Brisbane Times
have spoken up in protest. Get Up has mounted a
campaign
condemning The Courier-Mail’s representation of Prasetyo.

It is fundamentally important that The Courier-Mail continue to be taken to task for its lazy, unethical and distasteful reportage. Representation of trans people in Australia has been, on the whole, relatively benign in comparison with the UK and the US press. Maintaining that is important to the trans community – but it is not a certainty.

The style, over-sexualisation and victim-blaming in The Courier-Mail’s article is reminiscent of the kind of reportage normally associated with UK tabloids such as The Sun, The Mail and The Mirror, which consistently churn out the very worst reportage of transwomen. In a 2010 submission to the Leveson Inquiry articles such as The Sun’s
Sex Swap Mechanic Goes Nuts at Medics
; The Express’s
Half Man Gets New Breasts and Guess Who’s Paying For it?
; and the Daily Mail’s
The Gender-Free British Passport: UK Travellers May No Longer Have To Declare Their Sex, To Spare Feelings Of ‘Transgender People’
were used as examples of the regular abuse trans people experience at the hands of the British press.

Up until this year it was still publishing pieces about trans people by noted anti-trans feminists Germaine Greer, Julie Bindel and Julie Burchill. In January 2013 Burchill was responsible for one of the most hateful
anti-trans screeds
ever published in a major newspaper.

The Observer removed the article and issued
an apology
.

One of the many criticisms levelled against the British media through the Leveson Inquiry concerns trans people, who continue to be referenced in the media in a way that would be considered entirely inappropriate if directed towards ethnic minorities, people with disabilities or other groups.

This representation has an immediate and damaging effect on trans lives.

In particular the recent Rolling Stone article –
The Transgender Crucible
– about Cece McDonald, the trans activist who was sentenced to jail for manslaughter in 2012, highlights the toxic way that media representation, racism and being trans leads to violence, prosecution and imprisonment of innocent trans women.

Mainstream reportage of trans people in the US media is depressing too. While Time changed the landscape this year with its
Transgender tipping point
article, it’s one of only a handful of positive representations of trans people. There are many examples of bad reporting of stories involving trans people that have had real effects on people’s live.

In January 2014
Grantland
outed a transgender inventor – which led to her suicide.

Most recently The New Yorker published
What is a woman?
, giving oxygen to bizarre 19th-century junk psychology theories of notorious anti-trans feminists such as Australian Sheila Jeffreys.

At the same time the US media has been reluctant to cover stories like that of
Jane Doe
, a 16 year old transgirl of colour who continues to be incarcerated in an adult facility without charge.

It is to the great credit of sections of the Australian media that the Courier-Mail article has been so vociferously pounced on through online newspapers and social media. This is mainly because of the way that transwomen are increasingly being included in feminist circles and recognised as being legitimately of their target gender.

As trans activist Julia Serano points out in her book
Whipping Girl
, much of what is commonly called “transphobia” is merely traditional sexism in disguise. How true! The normalising of male violence and victim-blaming apparent in the Courier-Mail article affects all women,
cisgender
(those whose gender is aligned with their biological sex) and transgender alike.

But ignorance on reporting trans lives is no excuse.

As watchdog Transwatch
points out
gutter press reporting on transwomen dried up at the same time that the Leveson Inquiry was taking submissions, only to be ramped back up after the closing dates.

Reportage around alleged WikiLeaks leaker
Chelsea Manning
’s transition saw major media organisations in the US dump their own style guides in the race to cover her
story
.

In light of this it’s disingenuous for newspaper editors to claim ignorance in reporting trans issues. A wealth of support material exists and transgender advocacy groups actively engage with the media to make sure that there is no confusion about the way that trans people should be portrayed.

No journalist in the Australian media should ever be given the leeway to blur the shock of a woman being murdered with the titillation that she also happened to be transgender.

Eloise Brook does not work for, consult to, own shares in or receive funding from any company or organisation that would benefit from this article, and has no relevant affiliations.

SHARE
6 min read
Published 8 October 2014 at 11:58am
By Eloise Brook
Source: The Conversation