There is growing international consensus regarding the need for an independent and international investigation of alleged war crimes during Sri Lanka's civil conflict, writes Mark Riboldi. 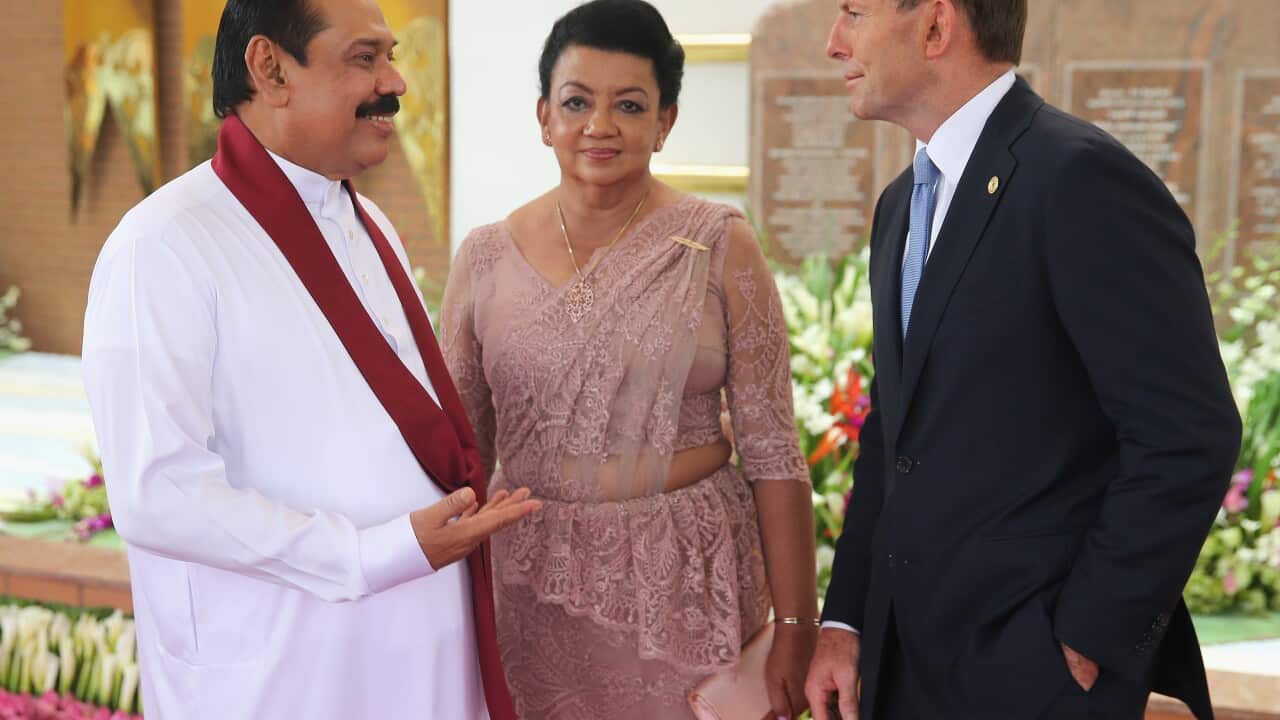 Next month the United Nations Human Rights Council will vote on a resolution on Sri Lanka. It relates to accusations of war crimes and crimes against humanity by both sides during the final stages of the island nation’s bitter civil conflict, and ongoing reports of systemic abuse of Tamils by the government since the end of the war in 2009.

Driven perhaps by internal asylum seeker politics, successive Australian governments have continuously sided with the Rajapaksa regime. There is, however, growing international consensus regarding the need for an independent and international investigation of the claims.

With the leaders of Britain, Canada and India having already taken public steps to distance themselves from the actions of the Sri Lankan government, the Abbott government is in danger of isolation within the Commonwealth and another international relations gaffe.
In November 2013
, Australian Prime Minister Tony Abbott expanded military cooperation between Australia and Sri Lanka, gifting two patrol boats to what
Jeff Sparrow describes as
“one of the most blood-soaked militaries in the world.” More than turning a blind eye, Australia is now
actively contributing
to the actions of a regime that UN Human Rights Commissioner
Navi Pillay warned in August 2013
is becoming “increasingly authoritarian.”

Advertisement
The
release of a report
on war crimes in the final stages in the war, by the Public Interest Advocacy Centre’s International Crimes Evidence Project, will add further evidence to the UN Human Rights Council’s deliberations.
The report contains
new eye-witness reports of the exhumation of mass graves and finds “reasonable grounds to suspect that rape and sexual violence, as both war crimes and crimes against humanity, were perpetrated,” and that Security Forces have “continued these practices in the post-conflict period with impunity.”

Australia is looking increasingly certain to be on the wrong side of history when it comes to Sri Lanka.

Like most other nations, Sri Lanka has
a long history
of migration and conflict. The Sinhalese (currently 75% of the population) emerged as the strongest tribe amongst other Indo-Aryan migrants in the fifth century BC. Tamil migration (currently 15%) from southern India began in the third century BC. European colonial interest began in 1505 with the Portuguese, who the Dutch drove out in 1658. British colonisation began in 1796, and the last remaining indigenous kingdom Kandy, was conquered in 1815. Independence, as the nation of Ceylon, was achieved in 1948.

In 1949 Indian Tamil plantation workers were disenfranchised and denied citizenship by the Sinhalese-dominated government. Sinhala was made the official language in 1956. In 1972, the government changed the country’s name to Sri Lanka and made Buddhism the official state religion, further antagonising the predominantly Hindu Tamil minority and sparking four decades of uprisings, insurgency, brutal crackdowns, and four periods distinct periods of outright civil war. Another catalyst for the conflict was July 1983, known by Tamils as Black July, which  journalist
Gordon Weiss describes as
“a government orchestrated pogrom that burned families out of their homes and drove them from their country.”

As a result of Black July many Tamils left Sri Lanka and migrated across the globe. Others joined a small guerrilla outfit, which eventually became the Liberation Tigers of Tamil Eelam (LTTE). Tamils weren’t the only recipients of elite government crackdowns - tens of thousands of young Marxist Sinhalas were killed in popular uprisings in the 70s and 80s, for example - but they have by far borne the larger burden.

The Sinhalese police and armed forces were notoriously brutal, including immolations on beaches, bodies dumped in rivers and heads stuck on pikes. The
LTTE recruited child-soldiers
and
pioneered the suicide vest
as a weapon of war. The BBC estimates that before January 2009, approximately 70,000 people had died in the first 25 years of the conflict.

The final phase of the conflict began in January 2008, when the Rajapaksa government formally broke
the Norwegian-brokered 2002 ceasefire agreement
and began an all-out assault on the Tamil independence movement in the country’s north. In September 2008, in an ominous foreshadow of what was to come, the Sri Lankan government ordered
the evacuation of all aid workers
and international observers from the Vanni - the mainland area of northern Sri Lanka that was LTTE heartland. The stage was set for a war without witnesses.

In January 2009
government forces captured the site of the LTTEs administrative headquarters, Kilinochchi.
In February
, Rajapaksa rejected international calls for a temporary cease-fire amid humanitarian concerns for civilians caught in a tiny strip of land between the armed forces.
In March
, UN Human Rights Commissioner Navi Pillay accused both sides of human rights abuses. By the end of May 2009 the Rajapaksa government had overrun the final patch of LTTE held territory, rebel leader Velupillai Prabhakaran was dead, and the Tigers had lain down their arms. The UN accused both the government and the LTTE of
war crimes and crimes against humanity
.

With no international observers, the number dead and displaced is unclear.
The UN estimates
up to 40,000 civilians were killed in the last months of the war, predominantly from government shelling.
Human Rights Watch
reported that makeshift hospitals were bombed by government forces at least thirty times from January to May 2009.
Local government data
indicates that by 2012, more than 100,000 people from the main areas of conflict were unaccounted for, suggesting a higher actual death toll.

Accusations of human rights abuses
against Tamils by the Rajapaksa regime continued. Human Rights Watch reported “widespread and systematic” sexual abuse by government security forces since the war ended. Rights group
Freedom from Torture
has investigated allegations of Tamils being branded with hot metal rods. One Ravi, a subject in
a BBC investigation
into allegations of torture during the Rajapaksa regime’s official ‘rehabilitation program,’ stated: "They would put my testicles in the drawer and slam the drawer shut... Sometimes if we lost consciousness during the torture they would urinate on us.”

The Sri Lankan government has consistently rejected calls for an independent investigation, pointing towards an (internationally discredited) internal investigation which cleared the government of systemic human rights abuses during the war.

The Australian mainstream media largely ignored ongoing issues within Sri Lanka until December 2012, when, following the lead of prominent former sporting boycotts against South Africa, a group of
campaigners called for a boycott
of the Sri Lankan cricket tour of Australia. The campaign was endorsed by numerous prominent Australians including author Thomas Keneally, Sydney Peace Foundation Chair Stuart Rees, human rights lawyer Julian Burnside and former Prime Minister Malcolm Fraser, who called for “an independent assessment of the situation in Sri Lanka, including whether members of the Tamil minority are being persecuted and how those sent back from Australia after coming here by boat are being treated.”

The Tamil people have not been without allies within the Commonwealth. The Indian and Canadian Prime Ministers both boycotted the Commonwealth Heads of Government Meeting (CHOGM) that was held in Sri Lanka
in November 2013
. Former Australian Prime Minister
Malcolm Fraser
and Australian Greens parliamentary leader
Christine Milne
both supported the boycott, with Milne describing Sri Lanka as a “democratically elected dictatorship engaged in the abuse of its people, particularly the Tamils.” In the same month, Conservative British Prime Minister
David Cameron
became the first foreign leader to visit Jaffna, the community in eastern Sri Lanka that saw some of the heaviest fighting over the decades of the civil war.

Mr Cameron has given the Sri Lankan government until March 2014 to adequately address calls for an independent investigation into human rights abuses towards the end of the war, and ongoing concerns about human rights abuses against Tamil people. Otherwise,
he says
the British government will use their position on the United Nations Human Rights Council (UNHRC) to call for a “full, credible and independent international inquiry.”

This March 2014 deadline, a vote by the United Nations Human Rights Council (UNHRC) on a third resolution brought against Sri Lanka, will be telling both in terms of the outcome and the Rajapaksa government’s response to it. The Sri Lankan regime is trying to get ahead of a potential vote for an independent war crimes investigation by setting up a
Truth and Reconciliation Commission
(TRC) akin to the restorative justice body instituted in South Africa after the formal dissolution of the apartheid system.

However, given the lack of cooperation and accountability displayed by the Sri Lankan government to date, its attempts during the war to escape international observation, and shocking reports of deteriorating conditions and torture since the war’s end, Rajapaksa’s attempt to hastily establish a TRC should be treated with great suspicion. The regime appears to have gone too far down the road towards dictatorship and thus a UNHRC vote in March 2014 for an independent international investigation is the best chance the Tamil people have to achieve peace with justice.

Mark Riboldi is a writer and photographer living in Sydney. He blogs at
www.sansicarus.com
and is on Twitter as @thebigriboldi.

More about the campaign for peace with justice in Sri Lanka:
http://www.srilankacampaign.org/