Comment: Richard Di Natale on the cost of government inaction over Ebola

Stopping the spread of Ebola means treating the virus at its source, and Australia must be a part of that relief effort. 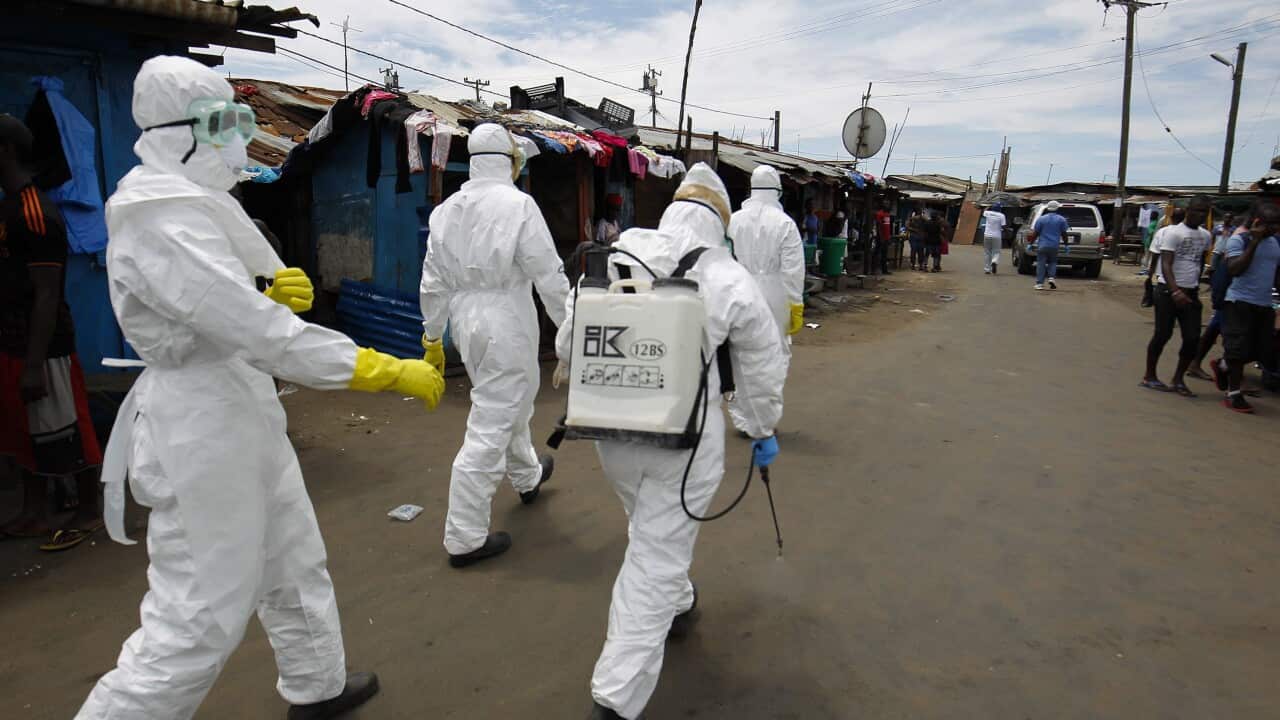 A Liberian Red Cross burial team on the move to pick up a suspected Ebola victim in the impoverished area of West Point, Monrovia (EPA/AHMED JALLANZO)

Before entering parliament I was a public health specialist, working on HIV prevention in India and in Victoria’s Health Department as part of an outbreak investigation team.

In these roles I quickly learnt that every infectious disease outbreak is different.

A food borne outbreak from the local fish and chip shop demands a different response to an influenza outbreak in a nursing home or a measles outbreak in a childcare centre.

Advertisement
There is however, one feature common to each outbreak and that is the imperative to respond quickly. Timing is critical and with each day that passes, exposure rates grow as the opportunity for early containment shrinks

The highly contagious nature of Ebola and the absence of any specific treatment for a virus which carries with it a fatality rate as high of approximate 50 per cent, have long been understood by health professionals and policy makers.

While the outbreak in West Africa is unprecedented both in terms of scale and its spread into urban settings, the key to saving lives remains the same - urgent and timely action to contain the disease at its source.

"The Prime Minister’s indication that our trained health professionals should remain in Australia to act as first responders to a possible outbreak in our region is a decision that potentially puts their lives at risk."

MSF director Paul McPhun recently commented that responding to Ebola is a lot like responding to a bushfire. If we don’t confront the fire at its source, we risk the spread of global spot fires.

In regions that are unprepared, these spot fires will take hold and the global relief efforts will be pulled in multiple directions to fight multiple fire fronts.

When we consider the logistical and political challenges associated with coordinating a concerted response in one isolated region, fighting the epidemic on multiple fronts is difficult to fathom.

While Australia is in the fortunate position of having a first class health system capable of addressing factors that are the mainstays of outbreak containment, other countries in our region are not so lucky.

Our neighbours in Papua New Guinea simply do not have the capacity to identify cases quickly, to undertake contact tracing or to ensure appropriate isolation and quarantine. Like an ember landing on a tinder dry forest floor, Ebola has the potential to quickly spiral out of control in a country like Papua New Guinea.

The Prime Minister’s indication that our trained health professionals should remain in Australia to act as first responders to a possible outbreak in our region is a decision that potentially puts their lives at risk.

Australia’s Medical Assistance Teams (AUSMAT), the group of health professionals that would be called on to lead such a response, has not received any field experience in responding to an Ebola outbreak.

Deploying them to lead the response to a regional outbreak is akin to sending in firefighters to tackle a raging fire with no firefighting experience.

"There are hundreds of Australian health workers who are desperate to help and are just waiting for the go ahead from their government."

Australian NGOs with a track record of responding to similar emergencies recognise that there is a world of difference between treating an individual in an Australian hospital setting and responding to an outbreak affecting thousands of people in a country with a failed health system.

Their volunteers receive intensive training in Europe and are then deployed to West Africa under the supervision of experienced health professionals. If we are genuine about helping our neighbours and keeping our doctors and nurses safe, this specialised training is essential.

Tony Abbott has stated that it would be irresponsible to send our people into harm’s way without securing an assurance that another nation will evacuate them if they become unwell.

Evidence from Senate Estimates last week indicates that Australia has been given assurances that our people would be looked after on a case by case basis.

While this might not be the “blanket guarantee” the government is after, an evacuation has not yet been refused. We also learned from the Chief Medical Officer that the UK is building field hospitals in West Africa that will be up and running in a matter of weeks, obviating the need to evacuate health professionals.

The government has run out of excuses.

Australia is being derelict in its responsibilities to deal with Ebola. With the UN projecting that 1.4 million people could die by the end of the year, it is clear that responding to Ebola is a moral issue and is also in our national interest.

Why is it that we can agree to a military intervention in Iraq in the name of saving lives and yet we cannot commit a fraction of those resources to an emergency the UN has said is a bigger threat than terrorism?

If the outbreak proceeds unchecked it has the potential to disrupt trade and cause a huge jolt to the global economy.

Finally there are hundreds of Australian health workers who are desperate to help and are just waiting for the go ahead from their government.

Halting the rapid escalation of the Ebola virus and protecting our region requires a global response. The UK, US, Japan, Germany and Cuba have all stepped up to the plate and it’s time for the Australian government to do the same.

Dr Richard Di Natale is the Greens health spokesperson and a former GP.