One of Australia's biggest grocery store chains says it has taken "corrective action" following the furore over racial profiling at a Melbourne supermarket. 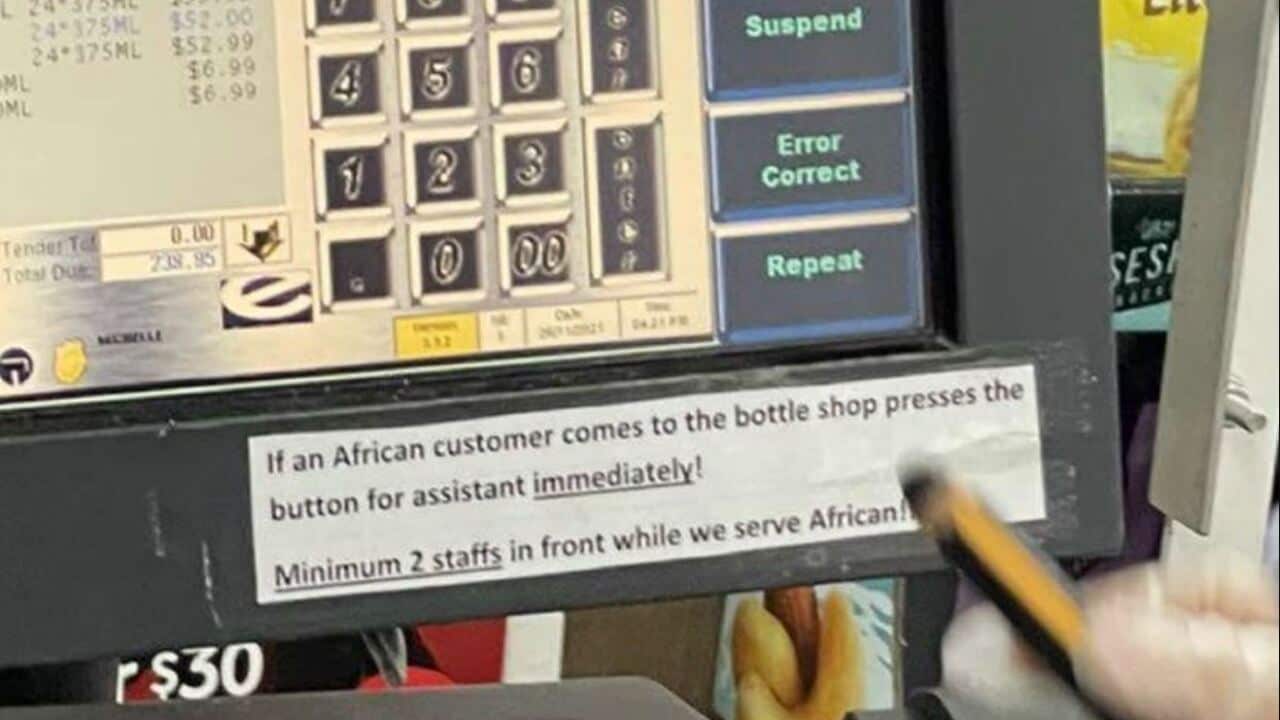 A sign displayed on cash registers at a Melbourne IGA has highlighted the issue of racial profiling faced by migrant communities. Source: Twitter

A sign singling out "African customers" at a Melbourne supermarket has sparked outrage, with the store's parent company describing it as "completely unacceptable" and "a gross error of judgement".

The sign, affixed to a cash register at Sunshine West IGA in Melbourne's west, instructed staff to call for extra assistance when dealing with "African customers".

“If an African customer comes to the bottle shop [press] the button for an assistant immediately! Minimum 2 staffs in front while we serve African,” a photo of the sign shared widely on social media read.

Advertisement
In a statement to SBS News, a spokesperson for IGA's parent company Metcash said it "grants the use of the IGA brand to independently owned and operated supermarkets in Australia that meet a set of minimum brand standards and operating criteria".

The spokesperson said the sign was "completely unacceptable" and that when Metcash became aware of it "we promptly took corrective action with the store in question, including immediate removal of the sign".

READ MORE
'Stopped for no reason': Calls for police to end 'racial profiling'

Training for store staff is "underway while we assess the matter to determine what further action is appropriate", the spokesperson said.

"We please ask the public to remember that this is one single store owner who made a gross error of judgement, it is not reflective of the other 1,300 IGA stores out there, who genuinely take pride in serving their local communities each and every day," they said.

Joseph Romeo, chairman of the IGA National Retailer Council, said in a statement that "this type of behaviour is unacceptable and will not be tolerated in any IGA store across the country".

"As part of our ongoing commitment to supporting local communities across Australia, we are committed to ensuring ALL IGA stores and their employees continue to create a shopping environment where all are welcome and equal," Mr Romero said.

"IGA retailers across the country are shocked by this event, please be assured that this is a one off case that will be dealt with appropriately."

The IGA case has fuelled debate over racial profiling faced by migrant communities in Australia.

In Victoria, racial profiling of African diaspora has been the subject of intense debate for more than a decade.

Flemington and Kensington Community Legal Centre (FKCLC) runs the Police Accountability Project that has been leading the fight against racial profiling in Victoria.

In 2013, FKCLC represented a group of six young African-Australians who settled a landmark racial discrimination case against Victoria Police in 2013, with the police force agreeing to review its practices in dealing with migrant communities following allegations of systemic racial profiling.

In recent years, Melbourne’s African communities have been roiled by media reporting and political commentary alleging an "African gang" crisis that reached fever pitch in the lead-up to the state election in 2018.

"We saw the opposition and the media stoke up a bunch of fear around 'African gangs' and the 'Apex gang', with the so-called 'Moomba riots'", FKCLC's race discrimination advocacy coordinator Ilo Diaz told SBS News.

"There were a bunch of different angles through which the opposition and other media outlets tried to stoke up fear that there was a rife African gang problem in Victoria, which was just not true.

"We were at the forefront of trying to stop these stories from taking hold and stigmatising and problematising a whole sector of our community."

"These individual cases of racial profiling are highly disturbing, and completely unacceptable," he said.

"In this case, the store says there needs to be two staff there, what's the next step after that? What's the escalation after that? Is it to call the police? Then you're adding in a state-sanctioned power that already has a problem with racialised policing, and you're escalating the oppression for people of colour."