The signing of what's being described as a 'historic' agreement between the Tasmanian Government and the Land and Sea Aboriginal Corporation of Tasmania is the result of years of advocacy for Aboriginal leadership in fisheries management.. 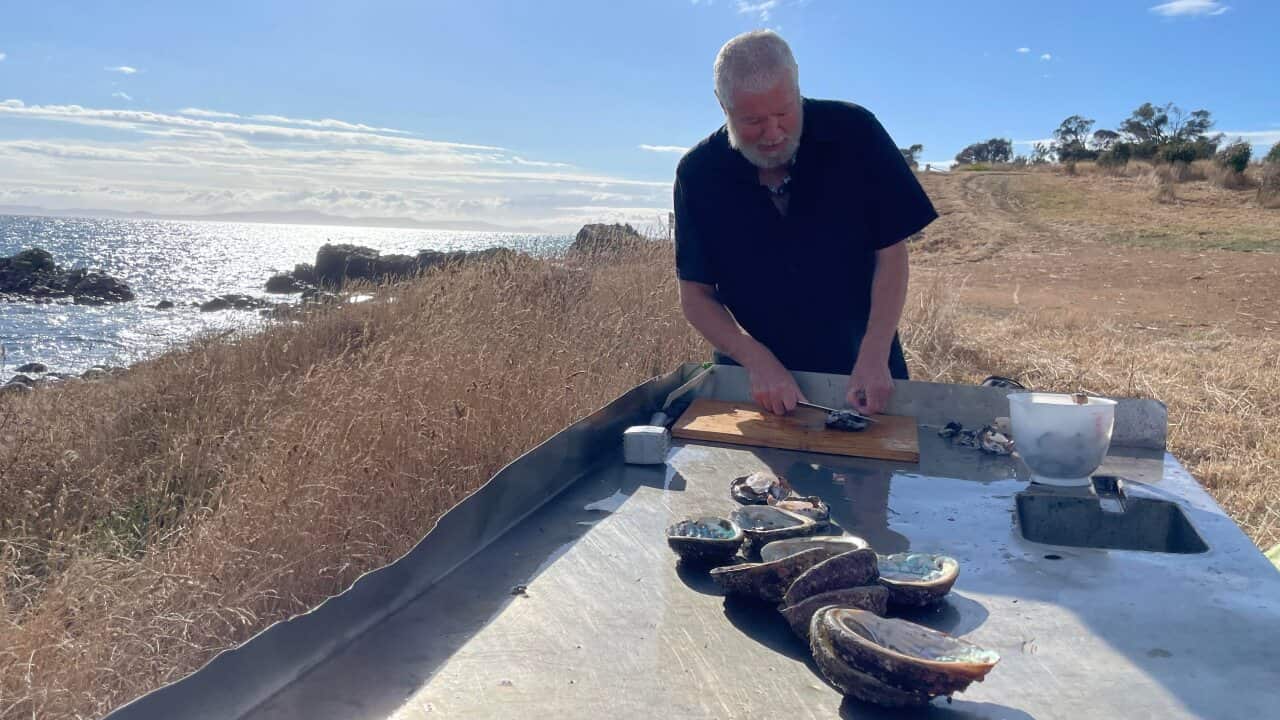 The Tasmanian Government has signed over its 40 abalone quota units to the Land and Sea Aboriginal Corporation of Tasmania (LSACT) , establishing a cultural fisheries program - part of a recommendation made in the state’s Pathway to Treaty report published last year.

Prior to today’s agreement, statutory fishing rights were available to Tasmanian Aboriginal people, but they were limited to non-commercial fishing, and for the collection of shellfish for traditional necklace making.

Dr Emma Lee is a trawlwuwuy woman and an Associate Professor at Swinburne University.

She said today’s agreement is the result of six years of research and advocacy for Aboriginal leadership in fisheries management.

Elder Rodney Dillon speaking at today's event. Source: SBS News / Sarah Maunder
“We want to be able to start new narratives about how to care for that abalone,” she said.

“Particularly in times of climate change and warming waters, so that that industry doesn't collapse.

In Tasmania, there are a total of 3,500 quota units available to commercial fishers each year. Of those units, 40 belong to the Tasmanian government.

In previous years, it would put those 40 units out to tender.

Under the new agreement signed today on Bruny Island, off of Tasmania’s south-east coast, the Land and Sea Aboriginal Corporation of Tasmania (LSACT) will have those 40 units under a three year lease.

Dr Emma Lee said the signing of today's agreement is the result of six years of research and advocacy. Source: SBS News / SBS/Sarah Maunder
Its goal is to establish a cultural fisheries program that encourages young Aboriginal people across the state into fishery careers.

“This is about us ending juvenile justice interventions through establishing cradle to grave programs for connections to Sea Country,” Dr Lee said.

“It’s about transforming commercial fisheries into fisheries with social impact, and this is about Aboriginal Tasmanian leadership for regional development that is not competitive with export industries.

“We are going to put local abalone on local hospitality and restaurant tables.”

Rodney Dillon is a palawa Elder, and the chairman of the LSACT.

“For many thousands of years, abalone was a base food for our people,” he said.

Rob Anders preparing to cook the abalone in the kitchen. Source: SBS News / Sarah Maunder
“Then commercial fishers found they could get quite a bit of money for abalone, and Aboriginal people could see one of the resources that we’ve been using for all our lives taken away from us.

“Today is quite a turn in this situation; having a government that’s willing to help us get some of our resources back.”

Mr Dillon said the three-year lease of the 40 units is just the start of negotiations, it’s likely the agreement will last longer than that, or the LSACT will purchase the units from the state government permanently.

Once today’s lease is signed, Mr Dillon said much more work needs to be done.
Black lip abalone, Haliotis rubra, juvenile under rock, Waterfall Bay, Tasmania, Credit: Auscape/Universal Images Group via Getty
“This food has been sold overseas and Aboriginal people have not even been able to have a look at it, so one of the things we’ll talk about, is to try and sell some of this food back here (in Tasmania) it’s a very nice food, and it’s part of our culture.

"The result of this agreement is nine new jobs for Aboriginal Tasmanians, we're very pleased and proud to be here today.

"This is a very special day for Tasmania, it's a date that all of us can celebrate."

“Bringing people to this state to eat this food, rather than send it overseas would be a good first step. But we’ve got to get established, and see how we go with that. Now that we’ve got this agreement as well, we’ll start approaching processors and see who’s willing to work with us.”

Mr Dillon said this moment will mean a lot to Tasmanian Aboriginal people.

The government of today is the first government that’s been willing to negotiate with us, to get some of these resources back that have belonged to our people for thousands of years.
Rodney Dillon

“There was some of us who didn’t want to stand up and challenge the law that this was ours in the first place, and that’s fine as well, but I think this personal journey for me has been pretty harsh sometimes, we were wrapped up in the court system and not able to negotiate this.

Joe Morrison from the National Indigenous Land and Sea Corporation travelled to Tasmania for the event.

"Knowing the struggle that has taken place here on these lands and the importance of abalone to the economy, and now after many generations of palawa fighting," he said.

"I think it's a signal that Australia is maturing to the point where we are seeing more and more of these rights being given to Indigenous people, and we're seeing that across the country."
SHARE
5 min read
Published 17 March 2022 at 6:51am, updated 17 March 2022 at 4:10pm
By Sarah Maunder
Source: SBS News