An annual dog meat festival has begun in China's southern city of Yulin, amid widespread domestic and international opposition. 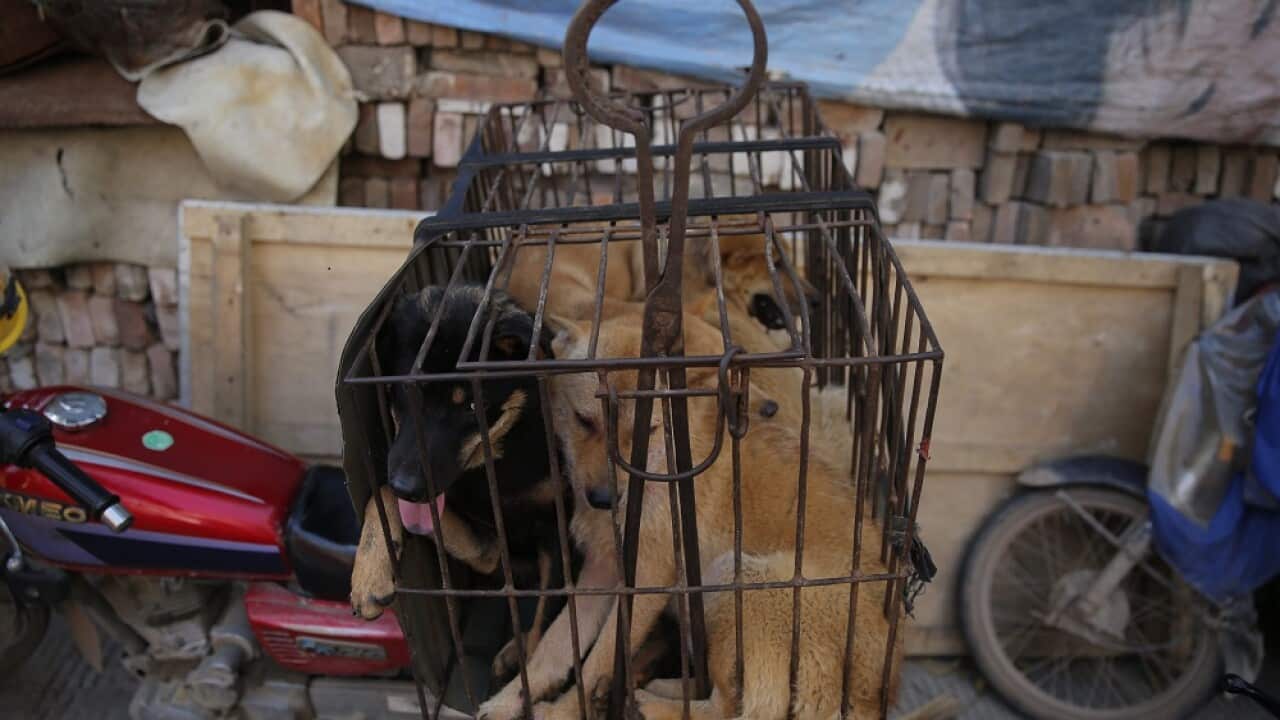 Dogs are seen in a cage for sale at a market in Yulin city, southern China's Guangxi province, 21 June 2016. Source: EPA

During the Yulin Dog Meat Festival, dogs are paraded in cages on their way to be slaughtered and then cooked for eating by festival attendees and local residents.

Many activist groups, like Humane Society International (HSI),  called on China's President Xi Jinping to put a stop to the festival.

Advertisement
The Yulin event is a source of pride for many locals, but domestic and international criticism is growing every year.

A poll published this week
in state news agency Xinhua
showed that 64 per cent of Chinese people aged 16 to 50 would support a permanent end to the festival.

Another 51.7 per cent, including Yulin residents, wanted the dog meat trade banned completely, and 69.5 per cent said they have never eaten dog meat.

Earlier this month, protesters presented a
petition
with 11 million signatures to the representative office of Yulin city.

The
petition
, which was created by Humane Society International and addressed to China's president Xi Jinping, asks for the end of the festival where animals "suffer enormously".

"With the dog meat festival in Yulin causing such severe animal suffering, risking human health, damaging China’s global reputation, and involving widespread illegal behaviour, as well as breaching China’s own food safety laws, it is time for the Chinese Government to take firm action to end this event for good," the petition stated.

In 2014, the Yulin government distanced itself from the festival, saying it was staged by private business people and did not have official backing.

File image of dogs in cages sold by vendors at the 2015 edition of the festival (AAP) Source: AAP

“Modern governments are fully aware that they cannot endorse social and morally questionable acts,” he said.

"Instead, the Yulin government has the responsibility to foster new culture and to build the city into a truly modern society.

“Endorsing mass dog slaughter and dog eating as a festival shows that the local officials are out of touch with the changes in China."

Launched in 2009 to celebrate the summer solstice, the festival celebrates the consumption of dog meat, which reached its height in China during the Han Dynasty (202 - 220 AD).

Mr Li said dog eating had been rejected as an indecent habit during the Sui-Tang dynasties (581 -907 AD) and that subsequent dynasties valued canines as hunting buddies.

endors tie a dog in preparation to butcher it at the Yulin Dog Meat Festival, in Yulin, in southern China's Guangxi province, 22 June 2015. (AAP) Source: AAP

He noted that dog eaters represented a minority of China's 1.3 billion population and the dog meat industry constituted "an insignificant part of the Chinese economy".

"It is an eating habit limited to older males of lower social and economic status," he said.

"It is a dying eating habit and a distasteful business."

The campaign against the festival has received celebrity backing from British comedian Ricky Gervais and US actor Ian Somerhalder.

The hashtag #StopYulin2016 has been popular on social media.

Claire Fryer, from People for the Ethical Treatment of Animals Australia (PETA), told SBS any situation where animals were slaughtered was unacceptable.

"The thought of killing, cooking, dismembering and eating dogs is enough for most of us to lose our lunch, but there's no rational reason why that same revulsion shouldn't exist at the thought of eating a pig,” she said.

“All animals about to be slaughtered feel terrified, and none want to die."

Ms Fryer said Australians needed to take note of all animals that are slaughtered.

“Right here in Australia, sensitive, scared lambs, chickens, cows and pigs are killed as we willfully turn a blind eye to the fact that they are no different from the dogs we cry for," she said.

“It's easy to point the finger at other cultures, but let's be honest enough and decent enough to question our own cruel habits.

SBS has sought response from the
Chinese Embassy in Australia
.