In a sign of cracks within the successful national cabinet, the Morrison government has attacked Victoria over its handling of schools during the crisis. 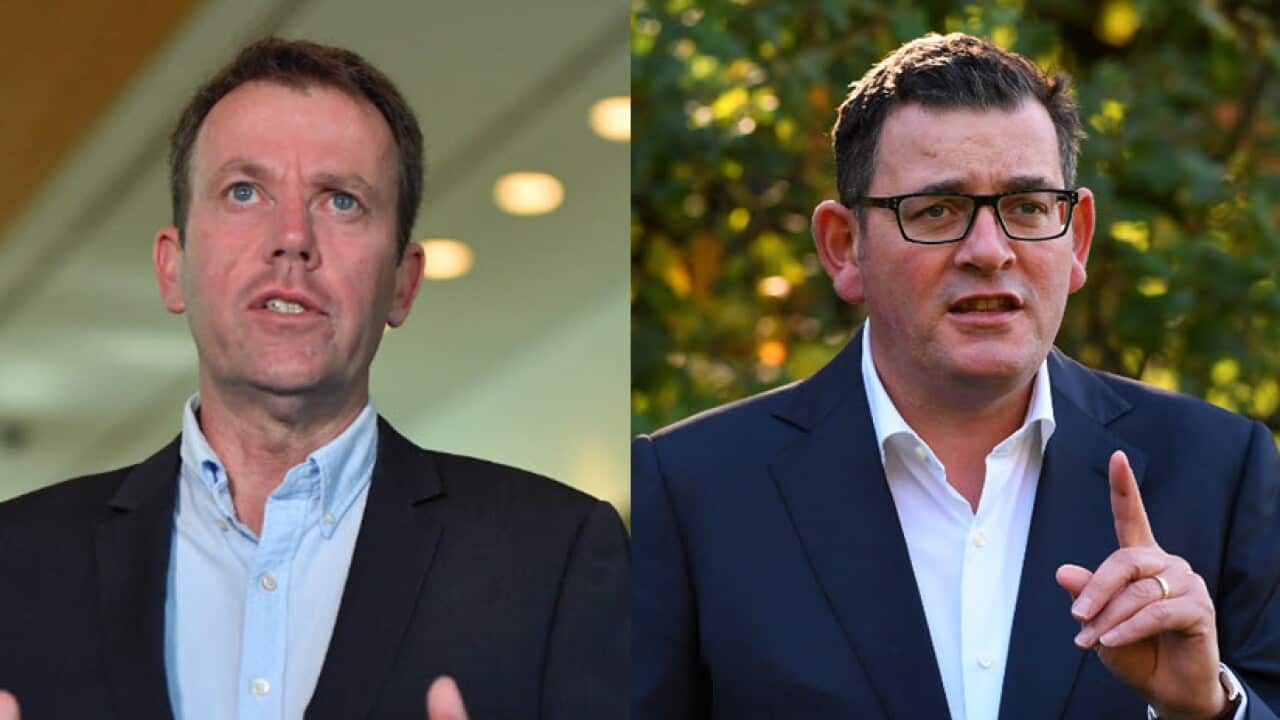 Education Minister Dan Tehan says he "overstepped the mark" when he launched a scathing attack on Victorian Premier Daniel Andrews over his decision to keep schools closed.

During an interview on ABC's Insiders on Sunday, Mr Tehan accused Mr Andrews of taking a sledgehammer to Victoria's school system and bad leadership.

Hours later, the Education Minister said he withdrew his statements - labelled "bullying" by Labor - citing frustrations with the plight of disadvantaged students who are hit hardest by home learning as igniting his anger.

Advertisement
"It was those examples I was thinking of this morning ... when I expressed my personal frustration that more schools weren't starting more in-class learning in my home state," he said.

The clash over schools between the Morrison government and Mr Andrews is likely to sour the mood of what has been a successful national cabinet during the coronavirus pandemic when it meets again this week.

The attack came as Victorian health minister Jenny Mikakos reported
a teacher had tested positive at the Meadowglen primary school in Melbourne
, which will be closed for three days for cleaning.

Mr Andrews has been adamant in not opening schools for fear of spreading the virus, while Prime Minister Scott Morrison has urged all schools to open.

But Mr Morrison has also previously said parents should listen to their premiers, although that stance now appears to have changed.

Mr Tehan said Western Australia, South Australia and the Northern Territory hadn't had to quash their education system to fight the virus and have a 70 per cent attendance at their schools.

'Listen to the medical experts'

Pressed several times on the Prime Minister's previous advice to parents about listening to their premiers, Mr Tehan said the government's advice was that parents should listen to the medical experts.

"It's safe for schools to be open and it is safe for teachers to be in the classroom when the right protocols are in place," the unusually heated Mr Tehan insisted.

He said the Victorian chief health officer was on the national medical expert panel which is providing that advice.

But Victoria's Chief Health Officer Brett Sutton, unlike his federal counterparts, is against allowing students back to the classroom at this stage.

Ms Mikakos said the Prime Minister needed to clarify whether Mr Tehan was speaking for his government.

"[Mr Morrison] asked Victorian parents to listen to the advice of the Victorian premier," she told reporters.

"I too would urge Victorian parents to listen to the advice of our government. The advice remains unchanged and that is that we will continue to engage in online learning for the foreseeable future."

Asked about the conflicting messages, Chief Medical Officer Brendan Murphy reiterated the government's position that schools were safe for children to return to on Sunday, but refused to criticise Victoria for their decision to keep them closed.

Meanwhile, Labor's education spokeswoman Tanya Plibersek said Mr Tehan's attack was "disappointing" when states and territories had been working so well with the commonwealth government during the crisis.

"This is a very difficult and stressful time for families ... and to have a big political fight between the states and the commonwealth when it comes to schooling is the very last thing they need."

READ MORE
Children in this Australian town don't have the internet, so their school has turned to radio

Queensland Health Minister Steven Miles said he was unaware of Mr Tehan's comments but said no one should be criticising state leaders.

"It would be pretty disappointing if the Morrison government was using it as a chance to take potshots at the states," Mr Miles said. "The last thing we need right now is levels of government criticising each other."

"We know now that COVID-19 is not behaving the same way as influenza," he told Sky News.

"Whereas with influenza, children are often primary transmitters in our society. It is clear now for COVID-19 that is not the case."

Half of Australia's students at risk of falling behind

It comes as a government-commissioned report showed almost half of Australian primary and secondary students are at risk of falling behind in their education if schools remain shut for too long.

Learning from home could disadvantage vulnerable students if nothing is done to support them, findings by the Rapid Response Information Forum chaired by chief scientist Alan Finkel show.

"If this is not addressed promptly and directly, learning gaps can emerge and widen," contributing author and UNSW professor Andrew Martin said.

"It is vital that students who are at academic risk receive the necessary instructional and other supports required for them to successfully engage in remote or blended learning."

The report was submitted to Mr Tehan on Friday and is a synthesis of research from 35 organisations on the effects of online versus in-class education.

It says students from socio-economic backgrounds, with English as a second language, who have special learning needs or are from remote areas are at particular risk of poor learning outcomes.

A file photo of children sitting in a classroom during a lesson. Source: AAP

The report suggests "blended learning" - a combination of face-to-face teaching and remote learning - could be as good as classroom learning for many students.