Tharnicaa Murugappan, who is currently being treated for a blood infection in Perth Children’s Hospital, has never celebrated a birthday outside of immigration detention. 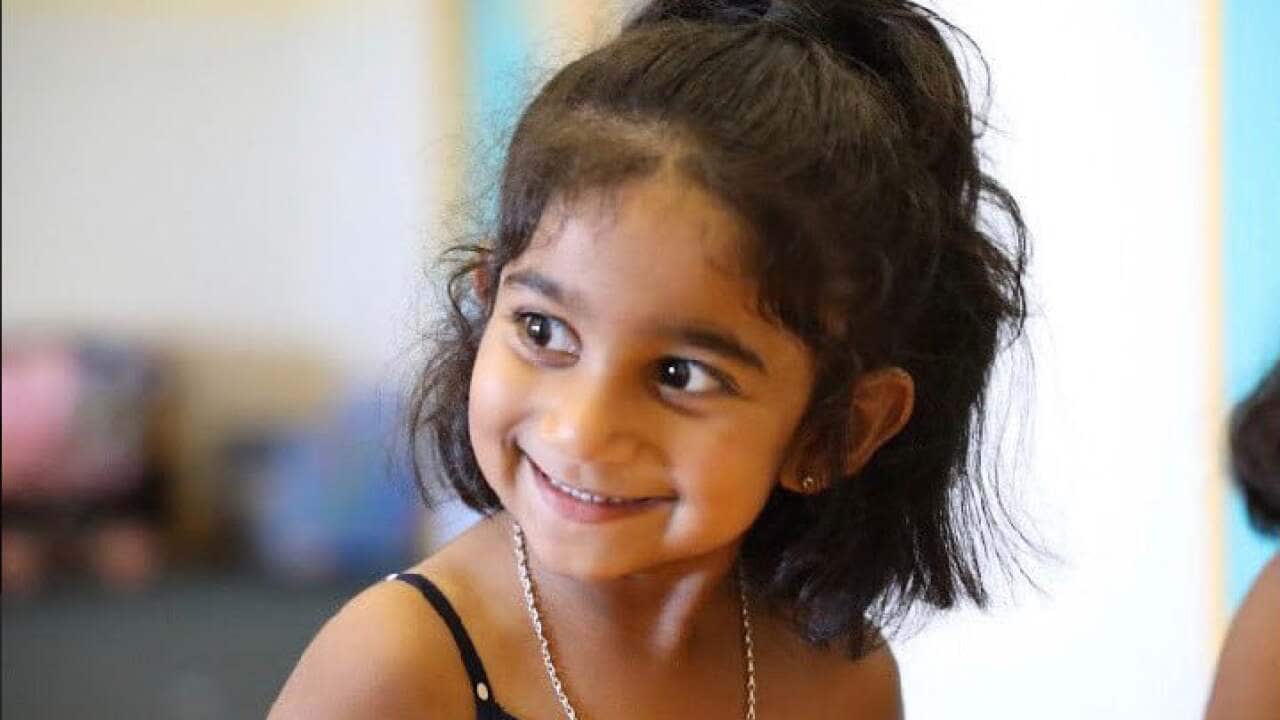 The youngest daughter of a Tamil asylum seeker family detained on Christmas Island is celebrating her fourth birthday in hospital, amid speculation over the family’s future.

Tharnicaa Murugappan was medically evacuated to Perth Children’s Hospital with her mother, Priya, on Monday, after more than 10 days of high fever, vomiting, and diarrhoea.

She was later diagnosed with a blood infection caused by untreated pneumonia, friends of the family said.

Advertisement
Her condition has stabilised, but on Saturday she celebrated her fourth birthday separated from her father, Nades, and five-year-old sister Kopika who were forced to remain on the island.

Tharnicaa (right) in hospital on Christmas Island with her sister, Kopika, before being medically evacuated to Australia. Source: Supplied

The family have been detained on Christmas Island, located about 2,600 kilometres from Perth, since August 2019 when an urgent court injunction blocked their imminent deportation to Sri Lanka.
Tharnicaa has never celebrated a birthday outside of detention
.

In a recorded birthday message from the island on Saturday, Nades and Kopika expressed their love for their daughter and sister.

“Happy birthday Tharnicaa, I miss you, I love you,” they said.

Tharnicaa's big sister Kopika and Dad, Nades, have sent her a video message for her special day. Source: Supplied

Tharnicaa’s hospitalisation has sparked renewed calls for Immigration Minister Alex Hawke to use his ministerial discretion to grant the family visas, while a legal action centred on Tharnicaa’s right to apply for protection continues.

SBS News understands a decision on the family's future is possible within days.

At a rally in Melbourne on Saturday, protesters urged the federal government to have compassion.

Nine newspapers
on Saturday reported
there could be a resolution within two weeks, quoting Nationals MP Ken O’Dowd. His electorate includes the small Queensland town of Biloela where the family lived before they were taken into immigration in 2018.

Mr O’Dowd reportedly said he had urged Mr Hawke him to use his discretion to allow the family to settle in Australia.

“He agrees with me, it’s gone on far too long,” he told the papers.

“It’s now in [Mr Hawke’s] lap, so to speak, and he says he’s got about 2,000 pages of documentation to go through. But hopefully, he’ll have a resolution in two weeks’ time.”

Nationals MP Darren Chester told ABC News on Saturday that it was his understanding conversations about the family were continuing, but it was a balancing act to manage Australia’s border security and compassion for the family.

“I know across Australia there is enormous compassion and empathy and concern for the welfare and wellbeing of the family and the young girl in question,” he said.

“The last thing we want to see is people getting on to boats and having the situation with people drowned at sea."

His comments came after Liberal MP Trent Zimmerman told ABC he had contacted Mr Hawke to express his support for the family to remain in Australia.

“I think it is time we put this to an end and bring them back to the mainland,” he said on Saturday.

Mr Hawke declined to comment as the matters were still before the court.

Lawyers and supporters of the family have long been calling for the immigration minister to use his discretionary powers under Section 195A of the Migration Act to grant the family visas to remain in Australia due to exceptional circumstances.

The two Australian-born girls are the only two children still in Australian immigration detention.

Lawyer Carina Ford told SBS News she had not been given a timeframe on when a decision on the family’s future would be expected but said she was aware the matter was before the minister.

“I had heard that a couple of weeks may be where it’s at,” she said. “I appreciate that there’s a lot of documentation to go through, but in my opinion, there’s only really one option now so it shouldn’t be that difficult to make a decision.”

Earlier this week, Home Affairs Minister Karen Andrews ruled out third-country resettlement as an option for the family after
Foreign Minister Marise Payne flagged the United States and New Zealand as possible locations
.

Meanwhile, a protracted legal battle hinges on Tharnicaa’s right to apply for protection after the other three family members exhausted their appeal options.

In February, the
full bench of the federal court upheld an earlier ruling
that found
Tharunicaa was not given procedural fairness
when her application for a protection visa was assessed.

The parties are now applying for the matter to be heard in the High Court.

The Department of Home Affairs has repeatedly said the family do not meet the criteria for protection visas.

Nades and Priya arrived in Australia by boat separately in 2012 and 2013. They say they are unable to return to Sri Lanka due to Nades’ links to the banned Liberation Tigers of Tamil Eelam organisation.

They were released into the community while their applications were assessed and they settled in Biloela.
They lived there for almost four years
before they were taken into detention in March, 2018, after overstaying their visa.

“Tharni should be running around Lions Park in Bilo today, enjoying a big birthday cake while her mum and dad watch on,” said Angela Fredericks, a family friend from Biloela and a spokesperson for the ‘Back to Bilo’ campaign.

“Until our friends are safe back home in Biloela, we will continue to do all we can to bring more Australians together as we all call for this beautiful family’s release.”

Migrants and refugees can struggle to access healthcare in Australia. This is why