A massive attack on a shopping mall in northern Iraq was the deadliest in violence that killed nine people nationwide on Wednesday amid fears of a slide into all-out conflict. 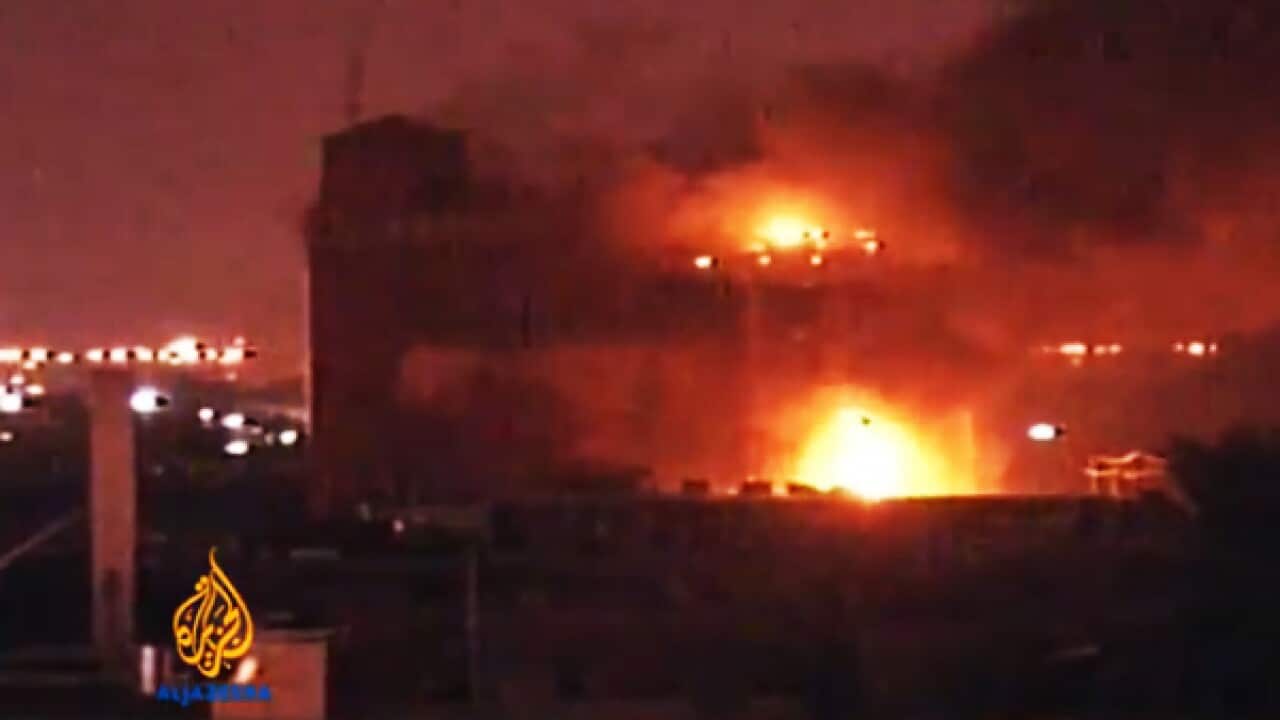 The mall burns through the Kirkuk night (Al Jazeera)

The coordinated attack on the complex, which involved a car bomb, gunmen and would-be suicide bombers, came amid a surge in unrest that has claimed more than 6,200 lives this year.

Officials have blamed a resurgent Al-Qaeda emboldened by the civil war in neighbouring Syria, but the government has itself faced criticism for not doing enough to address the concerns of Iraq's disaffected Sunni Arab minority.

Advertisement
Attacks struck in Baghdad, Mosul, Tikrit and Fallujah, but the ongoing attack on the Jawaher Mall in the ethnically divided northern city of Kirkuk was the deadliest.

A car bomb went off at 1:30 pm (1030 GMT) near the mall, which sits adjacent to a branch of police intelligence, and was swiftly followed by a firefight between security forces and militants.

Gunmen, some of them wearing suicide vests, stormed the centre, took shoppers hostage, and moved up the five-storey complex to the roof, from where they opened fire on security personnel who attempted to enter.

But officials warned that the death toll could rise as at least two would-be suicide bombers were still at large.

Among those killed were four security personnel, including an officer.

Security forces managed to free 11 hostages from the mall, which contains more than 100 shops including stores specialising in women's fashion and cosmetics, as well as men's clothing and other goods.

The mall, which is popular with middle-class residents of the northern oil hub, lies in a neighbourhood populated mostly by ethnic Turkmen.

Kirkuk has a mixed population of Arabs, Kurds and Turkmen.

It lies at the centre of a swathe of territory stretching from Iraq's eastern border with Iran to its western frontier with Syria that Kurdish leaders want to incorporate into their autonomous region in the north over strenuous objections from the central government in Baghdad.

Militants often exploit poor communication between the Iraqi army and Kurdish security forces to carry out attacks in the city.

Violence has spiked this year after security forces stormed a Sunni protest camp north of Baghdad in April, amid months of demonstrations by Iraq's Sunni Arab minority which complains of discrimination at the hands of the Shiite-led authorities.

The government has made some concessions aimed at placating Sunni Arabs, including freeing prisoners and raising the salaries of anti-Al-Qaeda fighters, and have also trumpeted security operations against militants.

But daily attacks have shown no sign of abating.

Despite a near-ubiquitous security force presence, attacks have hit targets ranging from cafes and football grounds to military checkpoints and government vehicles.