A shooting in Texas has left at least seven people dead and more than 20 others injured. 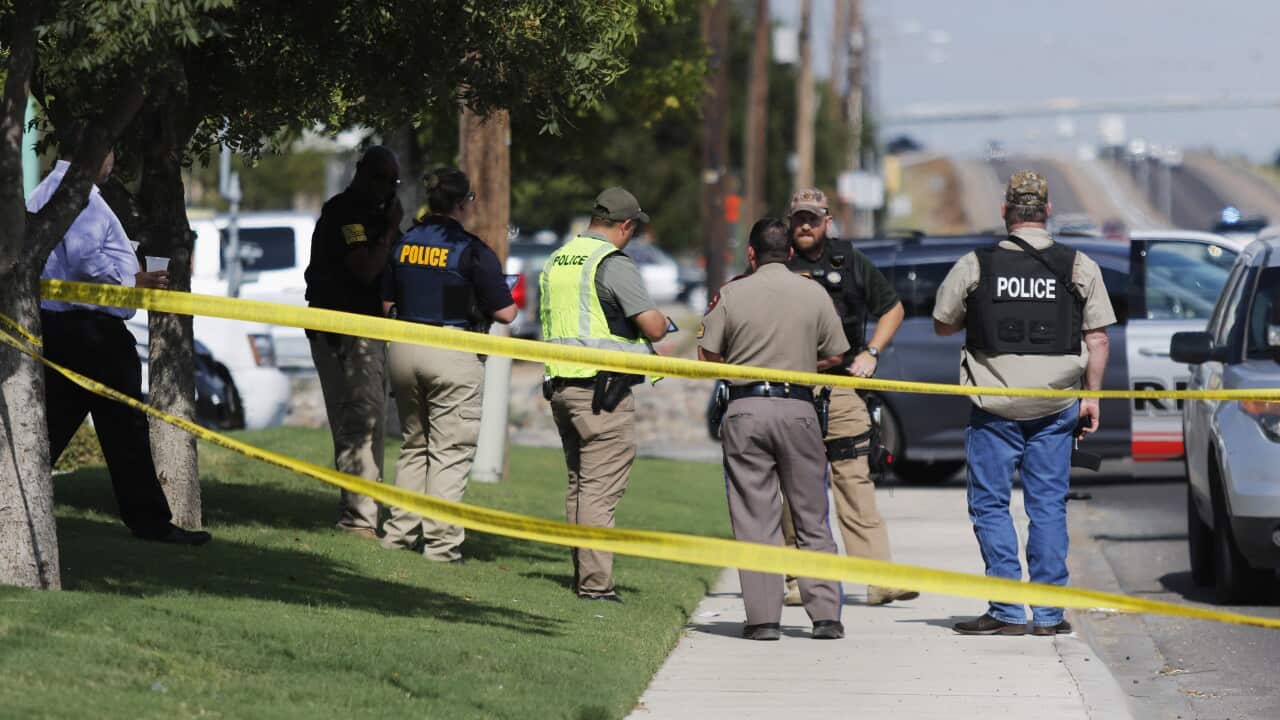 A gunman hijacked a US postal truck and opened fire at random in the US state of Texas Saturday, shooting dead at least seven people and wounding many others before dying in a shootout with officers.

Police identified the suspect as a white man in his mid-30s, but could not yet name him or say why he carried out the attack in the West Texas cities of Midland and Odessa.

Coming less than a month after a gunman killed 22 people in the Texas city of El Paso, the latest bloodshed immediately ignited fresh calls for gun control to stem the US scourge of mass shootings.

"We have at least 21 victims, 21 shooting victims and at least five deceased at this point in time," Odessa city Police Chief Michael Gerke told reporters.

The Odessa Police Department had earlier reported that a suspect was "driving around Odessa shooting at random people" and "just hijacked a US mail carrier truck."

Troopers had initially tried to pull over a passenger vehicle on the Interstate 20 highway but before it stopped, "the male driver (and only occupant in the vehicle) pointed a rifle toward the rear window of his car and fired several shots toward the DPS patrol unit," the Texas Department of Public Safety said in a statement.

One trooper was wounded, the suspect fled the scene, "and continued shooting innocent people," the department said.

Some of the shots were fired on the highway linking the cities of Odessa and Midland, where cars were left with bullet holes.

Odessa and Midland police and sheriff's deputies surround the area behind Cinergy in Odessa where a shooter who stole a mail truck was killed. Source: SBS / , Midland Daily News

"I just found out a friend of mine passed away," David Turner, the mayor of Odessa where the incident ended, told Fox News.

"This coward pulls up beside" and opens fire on the car where the man and his family were waiting at a stop light, MrTurner said.

During his rampage, the suspect had switched vehicles by hijacking the postal van, and Gerke said he "would assume" the postal worker was among the victims.

Police said the suspect died during an exchange of fire with law enforcement at a movie theater in Odessa.

Alex Woods, a witness, told CNN that near the movie theater "I could see a bunch of gunfire going off. And I could see the officer walking up to the mail van and discharging his weapon into it.

"And I believe that was when the shooter was killed."

President Donald Trump tweeted that he had been briefed by Attorney General Bill Barr.

The latest incident came after the early August mass shooting at an El Paso Walmart, where many victims were Hispanic.

In that case, officers arrested Patrick Crusius, 21, a white Texan, who told police that he was targeting "Mexicans," according to an arrest warrant published by US media.

The tragedy in El Paso was committed on the basis of "racist" anti-Mexican rhetoric, Jesus Seade, Mexico's foreign ministry undersecretary for North America, said during a memorial after that shooting.

Critics of Mr Trump have accused him of stoking such hatred.

The shooting in El Paso came hours before a gunman in Dayton, Ohio killed nine people, reigniting calls for gun control in the United States where firearms were linked to nearly 40,000 deaths in 2017.

"We need to end this epidemic," former Texas congressman Beto O'Rourke reacted on Twitter after the latest killings.

Mr O'Rourke, a Democratic presidential hopeful, expressed sympathy with "everyone in West Texas who has to endure this again."

Another Democratic contender, former San Antonio mayor Julian Castro, appealed on Twitter to the Republican-controlled Senate "who refuse to move on gun reform."

"What is the number? How many Americans are you willing to sacrifice to the NRA?"

After a series of mass shootings since late July Mr Trump had expressed provisional support for implementing universal background checks.

The president's position is crucial, because congressional Republicans, who count on gun rights supporters for votes, cannot move on tougher firearms legislation without his support.

However, US media including The Washington Post and The Atlantic in late August quoted White House sources as saying Mr Trump promised National Rifle Association head Wayne LaPierre he would not pressure Congress for a stringent, universal, pre-sale review of all gun buyers.