Citizenship is the ultimate goal of many migrants when they move to Australia, but the stats show it may be losing its appeal and suffering from the federal government’s tightening of permanent migration. 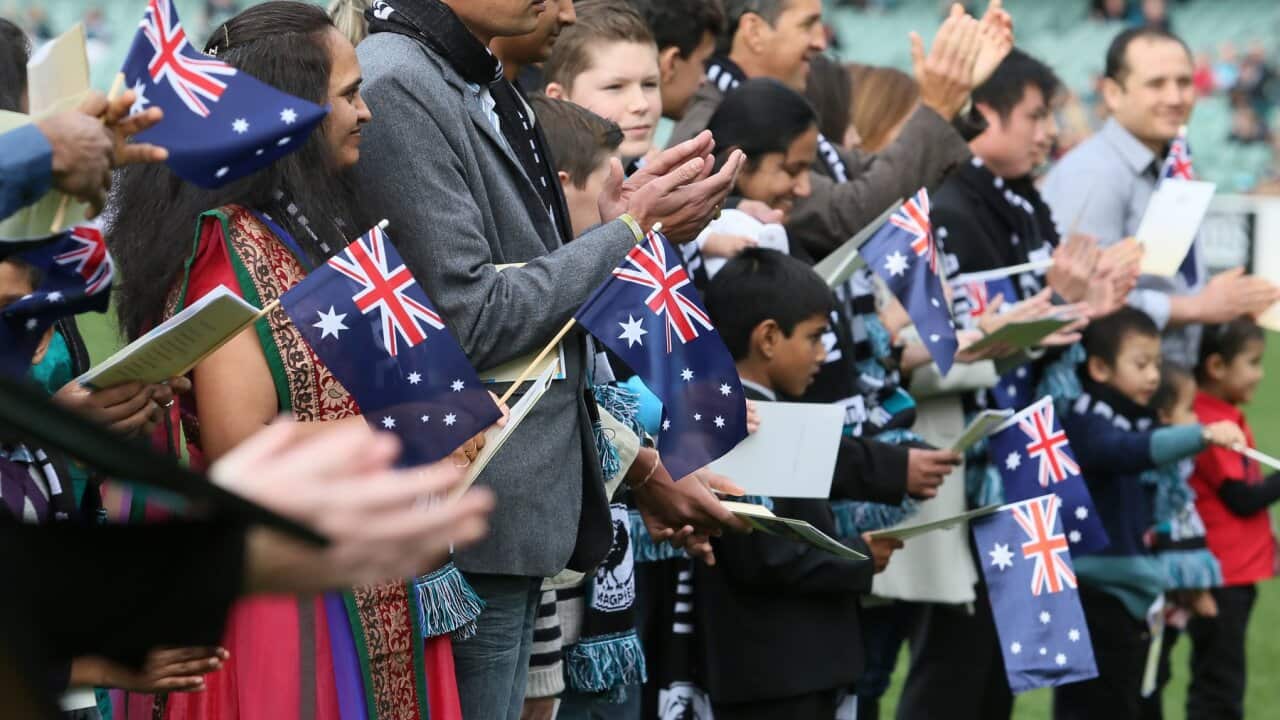 Fewer migrants are eligible for citizenship, while the appeal isn't enough for others. Source: AAP

Tens of thousands more migrants will officially call themselves Australians from 26 January, with hundreds of citizenship ceremonies held around the country, but an increasing number of people are either unable or unwilling to take up the privilege.

While net migration to Australia continues to increase, the numbers of people applying to become citizens has dropped to its lowest levels since at least 2014.

Advertisement
Information provided to Senate estimates by the Home Affairs Department suggests demand hasn't rebounded since then, with 48,255 applications received in the four months to the end of October.

Migration Council of Australia CEO Carla Wilshire puts the drop in demand down to a combination of factors, including the almost two-year wait for a decision on an application.

“In part, as we’d had a couple of years of backlogs, people are holding off on the applications,” Ms Wilshire told SBS News.

“We had a surge in applications followed by a lull.”

What happened to the values test?

There was a flurry of applications in 2017 after the government proposed new rules which would have made it harder to secure citizenship.

More than 440,000 applications were lodged in 2016-17 and 2017-18 as eligible permanent residents rushed to submit their application fearing a proposed “values test” would be introduced and university-level English would be required.

Ultimately the proposed changes never passed the Senate and have slipped off the political agenda.

The surge in applications coincided with the introduction of additional security checks, creating a backlog and blow out in wait times.

The department says an extra 115 full-time employees are now working on assessing applications and have reduced the backlog to 147,000 as of the end of October.

Three-quarters of applications are resolved in 16 months and 90 per cent in 21 months.

“For people who are waiting for citizenship, it is a significant outcome and often affects all sorts of aspects of their lives, so to some extent, people are putting their lives on hold while they wait for their applications to come through,” Ms Wilshire said.

'I don't want to be a citizen'

Practical matters aside, for some, the choice of whether or not to become a citizen of their new country is decided on sentimental grounds, identity and national pride.

When people ask Indonesian woman Tuti Gunawan why she hasn’t become a citizen after living in Australia for more than 50 years, she tells them jokingly: “I’ll become an Australian citizen when Australia becomes a republic.”

But there is a serious point underpinning her decision.

Indonesia does not allow dual citizenships, forcing those that move overseas to choose between their old and new home and identity.

Ms Gunawan’s parents were active in Indonesia’s independence movement in the 1940s and her elder brother was among the students fighting against the Dutch.

“It was imbued in me that you must be proud of your country,” she said.

For Ms Gunawan, the way Indonesia liberated itself from its Dutch rulers is in stark contrast to the British colonisation of Australia and oppression of Indigenous Australians.

“Indonesia has become an independent and proud nation, while to me Australia doesn’t behave like a fully independent country. It is blindly following the US, for example, and has a Queen of another country as its own Queen.”

Her attachment to her country of origin has only strengthened in recent years with the election of President Joko Widodo.

“It’s a real achievement for an ordinary person to become a president. He is according to me a very good president, he’s poor and he’s not corrupt.”

The freelance translator who lives in Melbourne with her husband and son is grateful that despite retaining her Indonesian citizenship, she can live in Australia with access to almost all the same rights as citizens, such as superannuation and worker protections.

But there are some jobs, such as some government roles and police officers, as well as the right to vote in elections, that non-citizens miss out on.

For those reasons, business consultant Rahma Suleman thought hard about swapping her Indonesian passport for an Australian one.

Rahma Suleman has missed out on government jobs because she is not an Australian citizen. Source: Supplied

Ultimately though, the 47-year-old, who moved to Brisbane in 2013, didn’t want to be a foreigner in her country of origin.

Ms Suleman said she makes regular visits back to Jakarta, where her brothers and sisters live, and wants the freedom to stay as long as she wants.

The slowdown in citizenship applications is expected to continue as there are fewer eligible for citizenship thanks to the federal government’s squeeze on permanent migration.

While fewer permanent residency visas are being offered, the number of temporary visa holders, including temporary skilled workers, international students and working holiday-makers continues to grow.

Ms Wilshire said that could have consequences for the future of multicultural Australia.

“I think it’s really important that we keep a model of multiculturalism that focuses very much on citizenship as an outcome of coming to Australia. I think that’s fundamentally important because it goes to the resilience and the community-oriented spirit of Australia.”

The Home Affairs Department acknowledged the change in migration policy was a contributing factor.

“There has been a reduction in migrant intakes over recent years, which reduces the number of clients eligible for citizenship," the department told Senate estimates in December.

The department suggested the drop in applications was not a bad thing.

“The continuous growth in citizenship applications stretching back to 2011-12 is not sustainable.”