Members of Brisbane’s Tamil community are calling for an investigation into claims made by Scott Morrison and senior government ministers that it got all the children out of immigration detention while the Murugappan family from Biloela was detained. 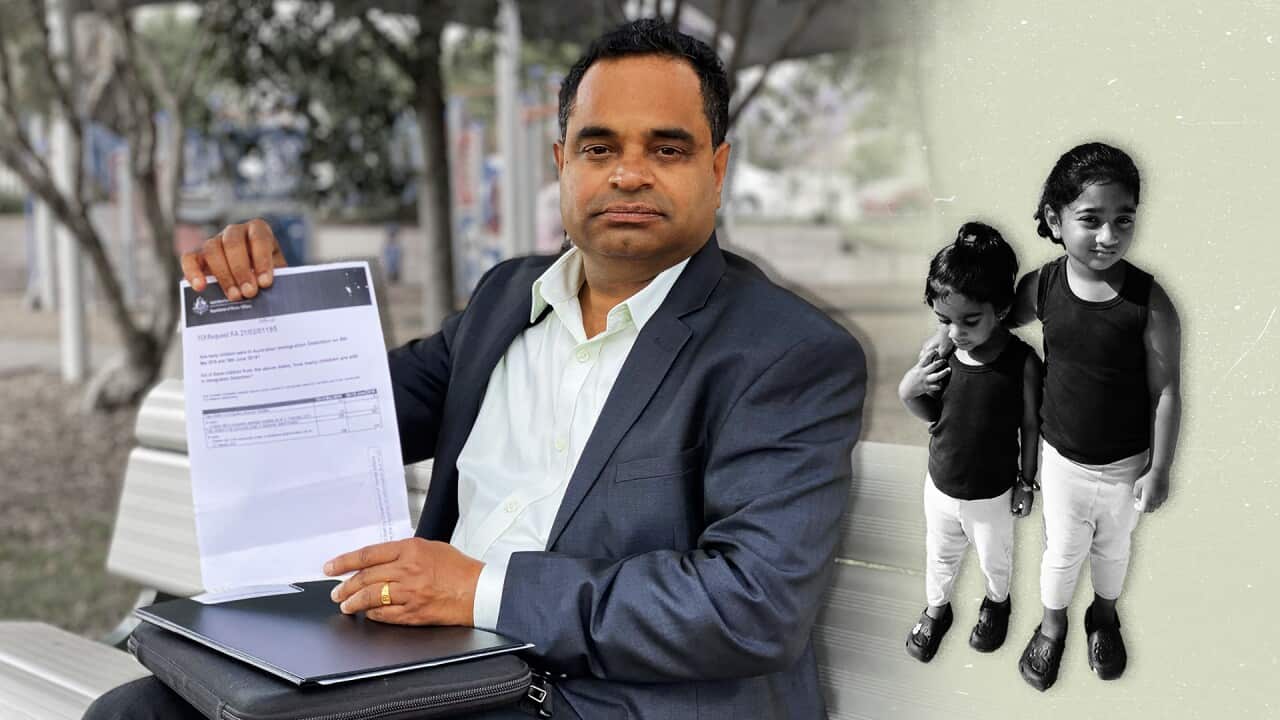 Prime Minister Scott Morrison has been called on by members of Brisbane’s Tamil community to refer himself and some of his senior ministers for investigation into alleged breaches of ministerial standards over statements about it getting all the children out of Australia's immigration detention system.

The government says the comments are being taken out of context.

June this year marked the first time in five years that there were no children in immigration detention facilities, according to monthly statistics released by the Department of Home Affairs - but the government's previous statements on the topic, to some, told another story.

Advertisement
Tharnicaa and Kopika Murugappan, the two daughters of the asylum-seeking Tamil family from the Queensland town of Biloela were detained in March 2018 and spent the majority of their time in detention on Christmas Island.

The girls, now aged six and four, were released into community detention with their parents Nades and Priya in Perth in May this year.

But throughout that time, Brisbane Tamil Association secretary Pal Chidambaram said he was surprised at what he was hearing in speeches made by members of the government, none more so than incumbent prime minister Scott Morrison ahead of the 2019 federal election.

Asked at the National Press Club Leaders debate on 8 May 2019 what unpopular decisions he had made, Mr Morrison responded: “Many of the policies we took to that [2013] election to secure our borders, to turn boats back where it was safe to do so, were opposed by many people”.

"I’ve got to say, the turn-back policy wasn't popular. But we did it and achieved the outcome.

"We saved thousands of lives and we were able to secure our borders and ensure that ultimately, we have got every child out of detention and every child off Nauru. This was a hard decision."

“He said we got all the children out of detention, which was untrue because not only myself but the entirety of Australia knew that these children [Tharnicaa and Kopika Murugappan] were in detention.”

And he wasn't alone.

Numerous senior ministers have made statements about getting children out of detention including Michaelia Cash, Peter Dutton, David Coleman and Simon Birmingham.

“When we came into office in 2013, we said we would put in place the right policies to ensure that we stopped the boats. We stopped the deaths at sea, we got the children out of detention,” then-Minister for Small Business and now Attorney-General Ms Cash told parliament in February 2019.

“In their [Labor's] day, they opened detention centres. We have closed 19 and we have got all the children out of detention, and we've done it in a way that hasn't recommenced boats. We have done it in a way that hasn't seen children go back into detention,” then-Minister for Home Affairs and now Minister for Defence Mr Dutton told parliament in the same month.

Then-Minister for Immigration David Coleman also had his say that month: "The greatest public policy failure in Australia's postwar history, an absolute disgrace, is what occurred. We fixed it. We got the kids out of detention".

“Our policies have worked in getting all children out of detention. Our policies are working,” Simon Birmingham, then-Minister for Trade and now Minister for Finance told parliament the following December.

Mr Dutton doubled down on his comments in October 2020: “On my watch, nobody has drowned at sea, and I've not sent a single person to Manus or Nauru. I got all of the children out of detention.”

What the records show

In April 2016, the Coalition released the last of more than 1,000 children still in detention under the previous Labor government when it lost power in 2013.

Department of Home Affairs statistics show there were no children detained that May and June in 2016. But when the Coalition was returned to government in the July 2016 election, the statistics show “fewer than five” children in detention, rather than zero.

In February this year, Mr Chidambaram lodged a Freedom Of Information request with the department asking how many children were still in immigration detention during Mr Morrison’s May 2019 speech.

The department responded saying it remained fewer than five - but it wasn't zero.

From her birth in March 2018, Isabella was held in the Melbourne Immigration Transit Accommodation (MITA) with her mother until their release in August 2020 - her path crossing with the Murugappan family for some of that time.

Mr Chidambaram wrote to the prime minister’s office and to the secretary of the Department of the Prime Minister and Cabinet Philip Gaetjens, who investigates suspected ministerial standard breaches, and the ministers.

Mr Chidambaram believes “this is a clear breach of ministers standards because the public have been misled, the parliament has been misled and we gave an opportunity to rectify and it did not happen”.

"It's all in black and white, and one doesn't need a PhD to work it out. We are expecting the prime minister and ministers to do the honourable thing."

Section 5.1 of the Australian Government's
Statement of Ministerial Standards
states: “Ministers are expected to be honest in the conduct of public office and take all reasonable steps to ensure that they do not mislead the public or the parliament".

"It is a minister's personal responsibility to ensure that any error or misconception in relation to such a matter is corrected or clarified, as soon as practicable and in a manner appropriate to the issues and interests involved."

Monash University associate professor Yee-Fui Ng specialises in government accountability. She said that “misleading parliament historically has been seen as a hanging offence, so one that ministers do tend to resign over”.

But, she suggested, “the application [of the standards] is completely at the prime minister’s discretion, so it's not a legally enforceable document”.

Ms Ng served as a policy adviser in the Department of Prime Minister and Cabinet for Labor under Kevin Rudd's government.

She said in her view it was “certainly possible” the ministers’ comments around children in detention breached the standards.

“There’s no transparency, so what we’ve seen is an increasing trend to try to ignore the standards and to try to survive any political controversy that comes up,” she said.

'Taken out of context'

The prime minister's office, as well as the offices of Ms Cash, Mr Dutton and Mr Birmingham, declined to comment to SBS News about the statements made about children in detention.

A government spokesperson said the comments referred to five years ago when the last of the previous Labor government’s legacy caseload of children in detention were released.

The statements were “made in the context of Labor’s border policy failures” which saw 50,000 people, including 8,000 children, arrive in Australia by boat, with at least 1,200 deaths at sea, they said.

“It would be inaccurate to take those comments out of context by implying they are a reference to the composition of the Immigration Detention Network on the day they were made when they are clearly referencing a specific cohort that was successfully removed from detention in its entirety under the coalition government.”

“Since 2013, the coalition government has successfully ended maritime people smuggling to Australia, and that’s allowed us to remove children from detention.”

A spokesperson for Mr Coleman said: "The statement is correct. The minister is very clearly referring to the children that Labor forcibly placed in detention when they lost control of the borders – and which he notes in his answer just seconds earlier".

Over the past five years, the number of children in immigration detention has been up to 49 but has generally been fewer than five.

Greens Senator and spokesperson for immigration Nick McKim said in his opinion, the government has a case to answer.

“There’s no doubt on the face of it, minister after minister, including the prime minister, have misled the Australian people and also misled parliament.”

“At the time the claim was made, there were children in detention and we know because Home Affairs’ own reports made it clear.

“This is a prime minister who is not only personally loose with the truth but is abjectly failing to ensure adequate standards of behaviour from his ministers.”