Cardinal George Pell's initial reaction to allegations levelled against him over the sexual abuse of two choir boys has been revealed for the first time. 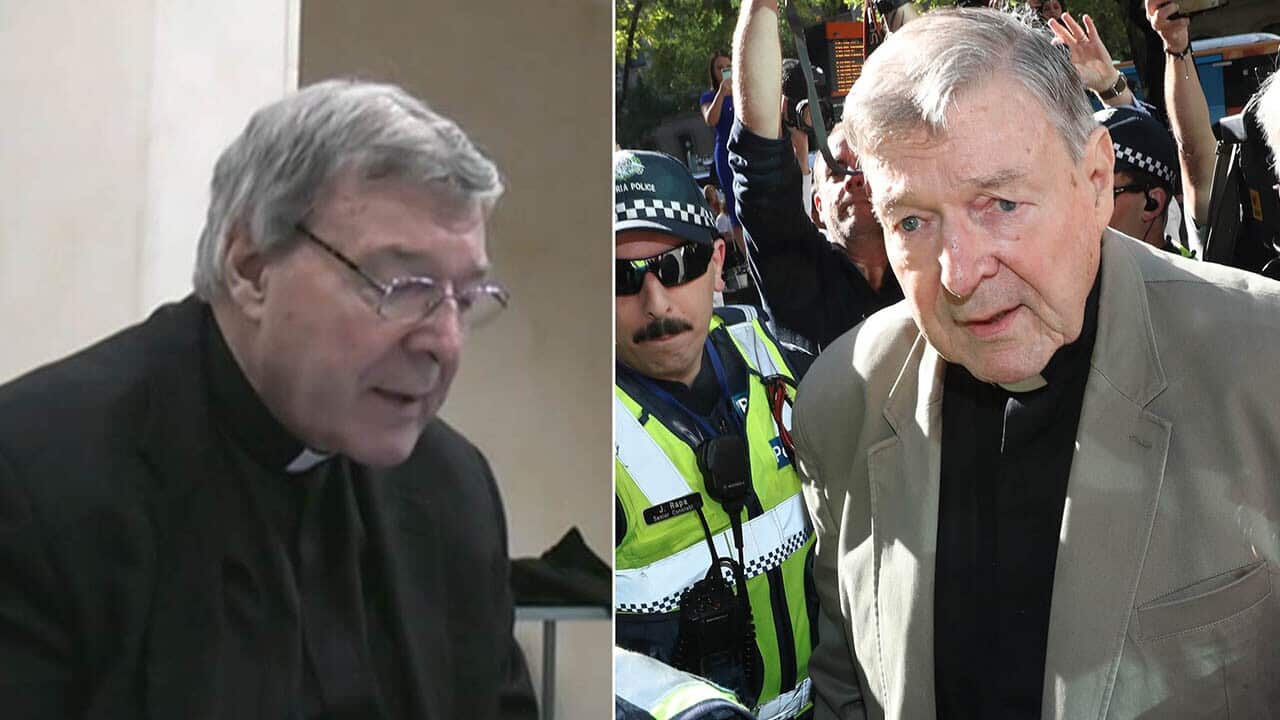 Cardinal George Pell's initial reaction to allegations levelled against him over the sexual abuse of two choir boys has been revealed for the first time. Source: AAP

A video released by the court reveals Cardinal George Pell's initial reaction to allegations of sex abuse levelled against him.

Cardinal Pell, once the third most powerful man in the Vatican and Australias most senior Catholic, was found guilty of child sexual abuse after a trial in Melbourne.

Police in Rome conducted an interview with George Pell in 2016. The video shows George Pell sitting with his arms crossed, his lawyer beside him, as he heard the allegations made against him for the first time.

Advertisement
"Oh, stop it. What a load of absolute and disgraceful rubbish, completely false, madness," he said.

Victoria Police detectives travelled to Rome in October 2016 where they questioned him at the Hilton Hotel, not far from the Vatican.

During the interview he repeatedly denied the allegations made against him.

"What a load of garbage and falsehood and deranged falsehood."

Pell read from a prepared statement before the interview, knowing the nature of the allegations which would be made against him.

"From what I've been told the allegations involve vile and disgusting conduct contrary to everything I hold dear and contrary to the explicit teachings of the church which I've spent my life representing."

He was charged almost eight months later, convicted of five charges in relation to sexually abusing two choir boys in Melbourne in 1996.

The abuse is said to have taken place at St Patrick’s Cathedral in the sacristy, a room where priests change, at the back of the church.

Concern for Pell's safety in prison

He spent his first night behind bars on Wednesday in the Melbourne Assessment Prison.

During his pre-sentence hearing, his defence raised concerns about his safety, given his high profile and the nature of the offences.

"For high profile prisoners they have to take all appropriate measures to keep them safe and I’m sure they’ll be doing that in this case."

Corrections Victoria would not speak specifically about Pell, but a spokesperson said all measures are taken to ensure the "safe" placement of prisoners.

"Corrections authorities conduct rigorous security and risk assessments on anyone coming into the prison system to ensure their placement is safe and secure."

Pell has continued to maintain his innocence and an appeal has been lodged against his conviction.

But his defence lawyer Robert Richter QC has issued an apology following comments he made during the pre-sentencing hearing, where he referred to the crimes as "no more than a plain vanilla sexual penetration case" as he tried to convince the judge the offending was at the lower end of the scale of offending.

Mr Richter said that following his choice of phrase, he had a sleepless night and offered his sincerest apology to anyone who may have been hurt or offended.

Pell will be sentenced in two weeks.