Australian paediatricians have urged the government not to send back 91 asylum-seeker children to Nauru after a legal challenge against the government's detention policy failed today in the High Court. 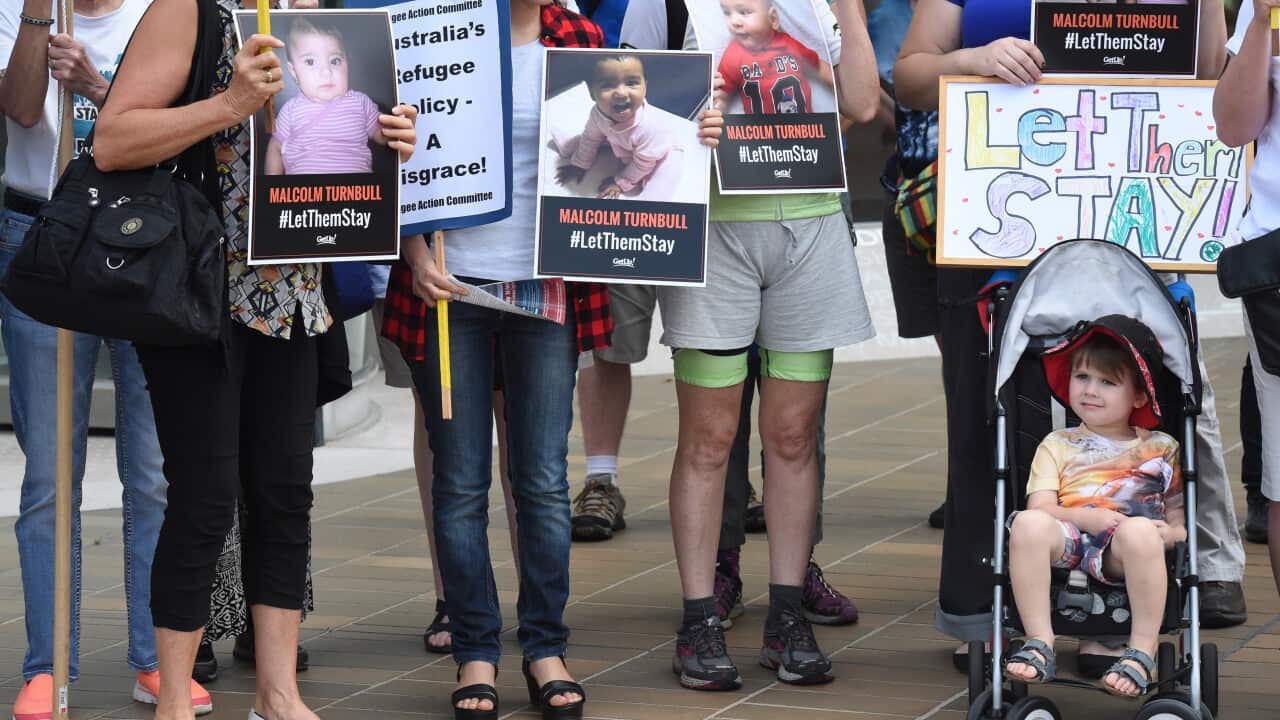 Australian doctors say children brought to Australia from Nauru for medical treatment risk long-term damage to their health if they are sent back to island detention.

The comments come after the High Court today threw out a challenge to the government’s immigration detention policies.

The majority decision means that 267 people, including 37 babies and 54 children, now face being sent back to Nauru.

"Health professionals with experience in the detention network are consistent in our calls to remove children from this environment," he told SBS.

"The children, some who have spent most of their lives locked up behind fences, deserve better."

Immigration Minister Peter Dutton has not yet stated whether the asylum seekers, including a five-year-old boy who was allegedly raped on Nauru, will be sent back to the island following the decision.

However in an earlier
interview with Sky News
, he said the government was not going to send people into "harm's way," but its stance on people smugglers had not changed.

Mr Dutton has not responded to SBS's request for comment.

Under the government’s Border Force Act, doctors are restricted in what they can say about what they witness inside immigration detention centres.

But Dr Gunasekera said he felt compelled to speak out despite the risks.

"I felt I had no choice but to let the Australian people know what we are doing to already-traumatised kids," he said.

His response to the High Court decision was echoed by Dr Elizabeth Elliott, who visited Christmas Island with the Human Rights Comission in 2014 and interviewed almost 200 asylum seekers, including many children.

"I don't understand the intricacies of the legal process however I think most people will be disappointed that this decision opens the doors for the government to send children [who are currently] resident in Australia back to offshore detention centres such as Nauru," she told SBS.

"I felt I had no choice but to let the Australian people know what we are doing to already-traumatised kids."

Dr Elliott said the children she came into contact with in detention were "desperate" and suffering a range of health problems.

"Some of them had lost developmental skills," she said. "They had become withdrawn, they had developed behavioural problems, sleeping difficulties, bed-wetting. Some had even lost their speech.

She said families on Nauru were living in tents and in extreme heat, conditions "totally inappropriate for children, particularly young babies who are prone to infection."

The legal claim was launched by the Human Rights Law Centre (HRLC) on behalf of a pregnant asylum seeker who was brought to Australia from Nauru for medical treatment.

She now risks being sent back to Nauru with her one-year-old child.

Speaking outside the High Court today, HRLC’s Daniel Webb said she and other asylum seekers in Australia for medical treatment were at risk.

"There are 267 incredibly vulnerable people who will be terrified," he said. "We're talking about 37 babies, 54 children, many of whom are going to be in classrooms around the country right now.

"We're talking about a dozen women who've been seriously sexually assaulted on Nauru or suffered serious sexual harassment on Nauru.

"The legality is one thing. The morality is another."

Mr Webb speaks to the media after the High Court of Australia ruling in Canberra. Source: AAP

Mr Webb claimed the court had found the government’s offshore detention policies legal only because of a retrospective law passed after the HRLC had launched its case.

The judgment stated: "I consider the plaintiff's central claim (that the Commonwealth and the Minister acted beyond the executive power of the Commonwealth by procuring and enforcing her detention at the Regional Processing Centre between 24 March 2014 and 2 August 2014) to have been well-founded until 30 June 2015, when [section]198AHA was inserted with retrospective effect."

He said the government was committed to border security.

"The people smugglers will not prevail over our sovereignty," he said.

"Our borders are secure. The line has to be drawn somewhere and it is drawn at our border."

"Australia is really leading the way in undermining refugee protection all over the Asia Pacific region," he said.

"It causes Australia’s foreign policy on human rights to also suffer a blow because what you have is Australia stepping back from being tough on countries like Vietnam and Sri Lanka because they want those governments' cooperation on stopping boats."

Mr Robertson urged the government not to send the asylum seekers back to detention.

"They say Nauru is an 'open' camp but the real prison is Nauru," he said.

"Nauru is a fly speck in the middle of the Pacific Ocean with no resources and no ability to care for asylum seekers, much less provide them with any sort of future."