US President Donald Trump has become the third president in US history to be impeached by the House of Representatives. 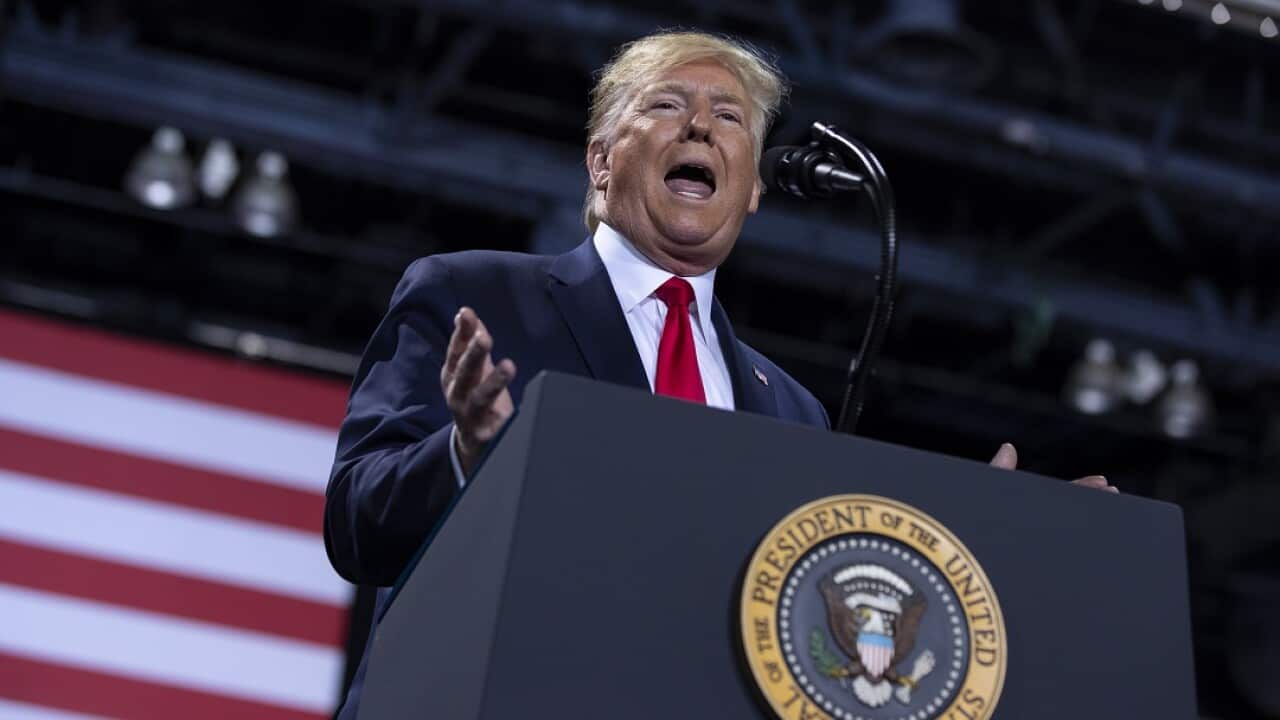 Donald Trump has become the third US president to be impeached. Source: AAP

President Donald Trump has been impeached in a historic vote in the House of Representatives, setting up a trial on removing him from office after three turbulent years.

The Democratic-controlled House voted 230 to 197 on the first article of impeachment on abuse of power to make the 45th US president the third White House occupant in American history to be impeached.

A majority also supported the second article of impeachment against Mr Trump - for obstructing the congressional probe into his attempt to have Ukraine investigate his potential 2020 Democratic presidential opponent Joe Biden.

As voting got underway, Mr Trump took to the stage at a rally in electoral swing state of Michigan to address thousands of his most loyal supporters.

The president told the rally that Democrats were "consumed with hatred" and accused his rivals of "trying to nullify" his election win.

The historic vote sets up a Senate trial on removing Mr Trump from office after three turbulent years, but the Republicans hold a solid majority in the Senate and are expected to exonerate him.

Speaker of the House Nancy Pelosi walks into the chamber where the Democrat-controlled House of Representatives just voted to impeach President Donald Trump. Source: AP

Supreme Court Justice John Roberts is expected to preside over his trial, representatives from the House will act as prosecutors, and the president's attorneys will present his defence.

Two thirds of the Senate is needed to remove the president from office and, unless Republicans break ranks, Mr Trump is likely to be acquitted.

READ MORE
What is impeachment of a US president, and how does the process work?

Mr Trump is accused of using a delay in delivery of foreign aid money to Ukraine to try
to force the country to open a deliberately embarrassing corruption probe
into a main 2020 reelection rival, Democrat Joe Biden.

The president also stands accused of
obstructing Congress by refusing to cooperate with the impeachment investigation
, barring staff from testifying and holding back documentary evidence.

Earlier in the day, Mr Trump was holed up at the White House, sending out streams of tweets reflecting his frustration, anger and predictions of revenge at next year's election.

"Can you believe that I will be impeached today by the Radical Left, Do Nothing Democrats, AND I DID NOTHING WRONG! A terrible thing," Mr Trump said in his opening tweet.

Donald Trump lands in Michigan, set to attend a campaign rally while the House voted on his impeachment. Source: AP

Democrats said they had "no choice" but to formally charge the Republican president, whose impeachment along stark party lines places an indelible stain on his record while driving a spike ever deeper into the US political divide.

"What is at risk here is the very idea of America," said Adam Schiff, who headed the impeachment inquiry, ahead of the vote.

Neither of the two previous presidents impeached since 1789, Andrew Johnson in 1868 and Bill Clinton in 1998, was convicted in the Senate, and both held onto their jobs.