Incumbent US President Donald Trump has refused to concede defeat and had been out golfing when news broke that he had lost the election. 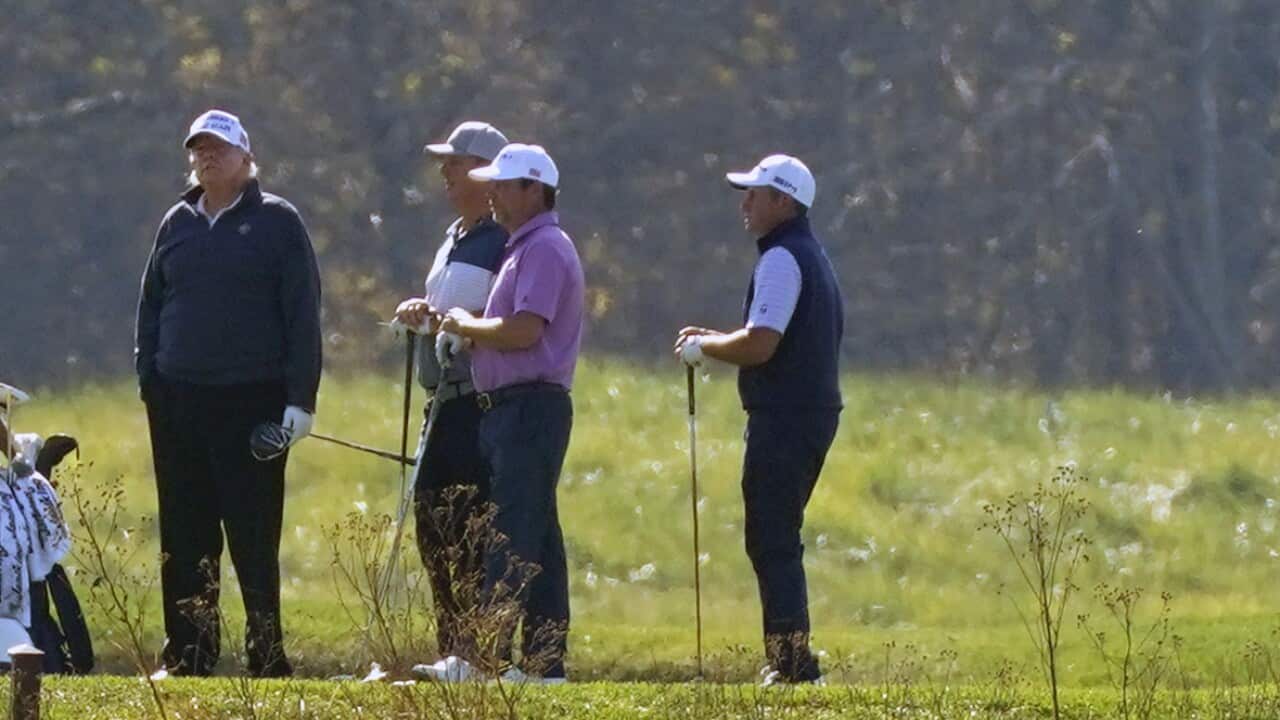 Incumbent President Donald Trump is hanging on for his political life and refusing to accept the reality of
Democratic victory in the United States election.

Mr Trump was out golfing at his course in Virginia when several US networks finally declared that his political rival, Joe Biden, had won swing state Pennsylvania and the 270 electoral votes needed to clasp victory.

The president immediately accused his political rival of "rushing to falsely pose as the winner".

Advertisement
"We all know why Joe Biden is rushing to falsely pose as the winner, and why his media allies are trying so hard to help him: they don't want the truth to be exposed," Mr Trump said in a short statement.

Mr Trump underlined that states had not yet certified the results, and his campaign has launched multiple "legitimate legal challenges that could determine the ultimate victor".

The president also took to his favourite social media platform, Twitter, to get his message across, tweeting in all-caps "I WON THIS ELECTION, BY A LOT!".

Soon after he'd posted the tweet, Twitter fact-checked the tweet, adding an alert that read: "Official sources may not have called the race when this was Tweeted."

A few hours later, Mr Trump followed up that tweet with two others claiming he'd won "the most votes ever for a sitting President".

He also falsely claimed he has won the election and repeated unsubstantiated claims of electoral fraud.

It comes after President Trump fronted the media on Friday to claim without evidence that Democrats were attempting to “steal the election”.

He also falsely declared he’d won the swing state of Pennsylvania long before counting was over and said he was “on track to win” another key battleground, Arizona.

Reeling from the news that his father had lost the election, Eric Trump retweeted a post claiming Pennsylvania had ignored the Supreme Court.

The president's other son, Donald Trump Jr., said earlier on Friday that "the number one thing that Donald Trump can do in this election is fight each and every one of these battles to the death."

There was no word from Mr Trump's daughter and advisor, Ivanka Trump, or Vice President Mike Pence who were silent on Twitter in the immediate aftermath of the defeat.

Prior to the election, Mr Trump refused to commit to a peaceful transfer of power if he lost.

Instead, he filed a raft of lawsuits to challenge the results but elections officials in states across the country say there has been no evidence of significant fraud.

A US Supreme Court justice on Friday denied a request by Pennsylvania's Republicans to immediately halt the counting of ballots arriving after Election Day, referring the challenge to the full court to consider on Saturday.

The last-ditch petition for an emergency injunction targeted thousands of ballots and was filed as Mr Biden solidified his lead and was poised to defeat President Trump.

Mr Trump now joins a rare club of US presidents
who have lost re-election
.

Since World War II, only two other presidents who sought a second term from voters have failed: Jimmy Carter and George H.W. Bush.