The Bulletin of the Atomic Scientists says despite advances like COVID-19 vaccines, the world is no safer in 2022 than three years ago when the Doomsday Clock's hands were moved to their current position. 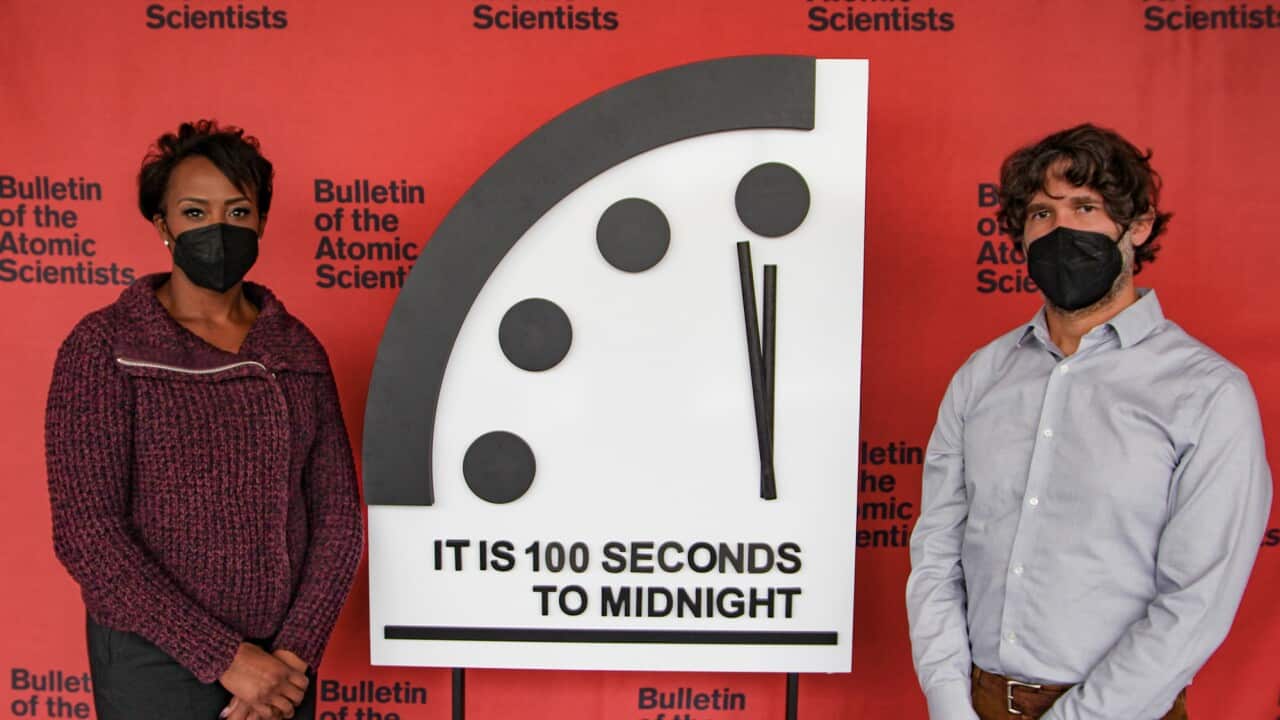 The "Doomsday Clock," representing the judgment of leading science and security experts about perils to human existence, remains at 100 seconds to midnight this year, with advances like COVID-19 vaccines balanced by rising misinformation and other threats.

Bulletin of the Atomic Scientists president Rachel Bronson declared the world was no safer this year than 2019, when the clock's hands were moved to their current position.

"If humanity is to avoid an existential catastrophe, one that would dwarf anything it has yet seen, national leaders must do a far better job of countering disinformation, heeding science and cooperating," she told reporters on the 75th anniversary of the clock's initial unveiling.

The fact that it hasn't shifted closer to midnight does not imply threats have stabilised, the group said in a full statement.

"On the contrary, the Clock remains the closest it has ever been to civilisation-ending apocalypse because the world remains stuck in an extremely dangerous moment."

The Bulletin was founded in 1945 by Albert Einstein, J Robert Oppenheimer and other scientists who worked on the Manhattan Project which produced the first nuclear weapons.

The idea of the Clock symbolising global vulnerability to catastrophe followed in 1947.

Its time is set by the organisation's board, with the support of its board of sponsors, which includes 11 Nobel laureates.

In its statement, the Bulletin noted hopeful developments at the start of 2021, including the renewal of the New START arms control agreement between the United States and Russia.
A Ukrainian soldier walks at the line of separation from pro-Russian rebels near Popasna in the Donetsk region, Ukraine. Source: AAP

But international tensions continue to loom ominously, including most recently over Ukraine. The US, Russia and China meanwhile continue their march to develop hypersonic weapons.

No country meanwhile remains immune to threats to democracy, the Bulletin said, "as the 6 January 2021 insurrection at the US Capitol demonstrated."

More than 10 per cent of those charged with crimes related to the riot were active or retired service members, underscoring extremism in the military.

"The past year has seen a staggering onslaught of climate disasters," said Raymond Pierrehumber, a professor of physics at the University of Oxford.

"We've had the heat dome over North America, worldwide fires, drought, floods, but this is just a sample of what is to come if we don't get the emissions of carbon dioxide to zero."

And while COVID-19 has focused the world's scientific attention, governments must be prepared for other biological threats - from weapons programs to the rise in antibiotic resistance, which the Bulletin said could trigger a new pandemic within a decade.

The Bulletin particularly highlighted how disinformation - much of it stoked from politicians in high office - is undermining faith in science and handicapping the world's ability to confront its challenge.

"A particularly invidious threat is the intentional undermining of the public's ability to sort out what's true from what's patently false by information warfare," said Sharon Squassoni, co-chair of the board and a research professor at George Washington University.

"This subverts our ability to arrive at consensus on the solutions needed to achieve positive change," she added.

The Bulletin called on the Washington and Moscow to expand the scope of nuclear reduction, and for the world's leading polluters to accelerate decarbonisation.

"China should set an example by pursuing sustainable development pathways - not fossil fuel-intensive projects - in the Belt and Road Initiative," it said.

The US and other leading countries should meanwhile heighten cooperation through the World Health Organization to reduce biological risks.

This would involve improving monitoring of animal-human interactions, increasing international disease surveillance, and ramping up production and distribution of medical supplies.