Australians in the US have been fundraising to support the refugees' resettlement which has been complicated by the coronavirus pandemic. 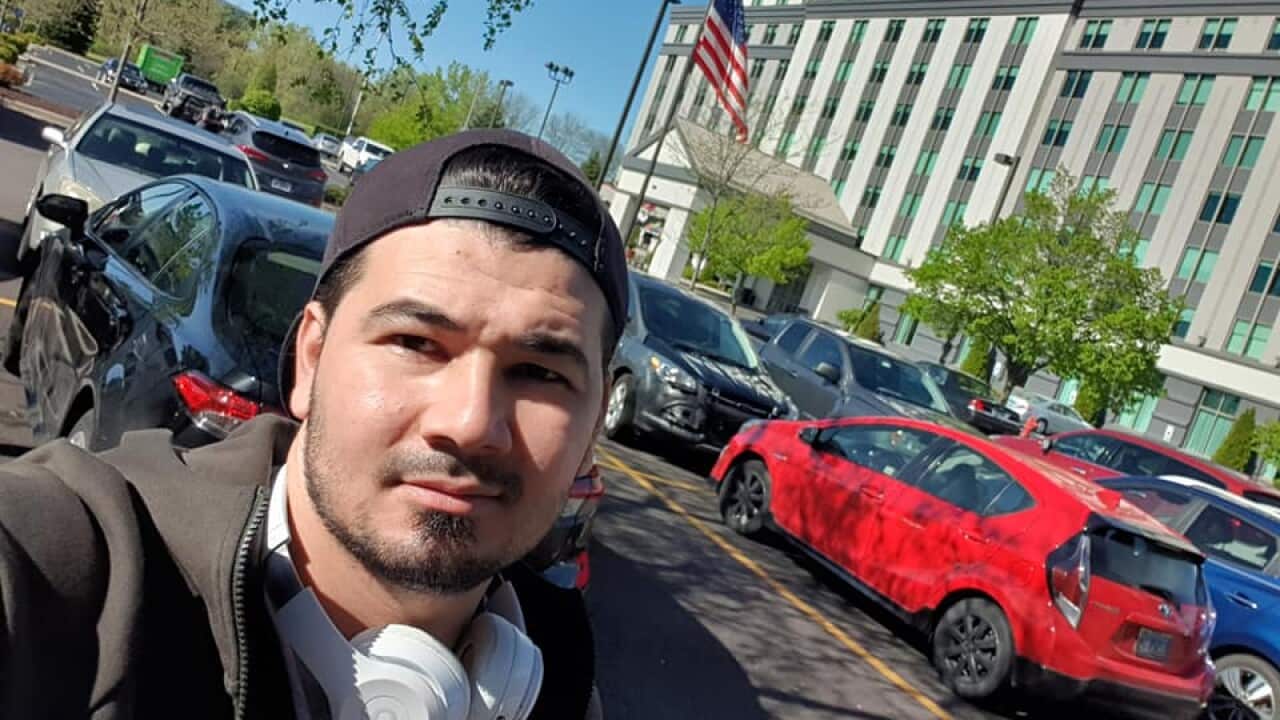 Dozens of refugees who have spent years in Australia’s offshore processing regime have been flown to the United States for resettlement, despite COVID-19 travel restrictions.

Transfers from Papua New Guinea and Australian immigration detention centres under the US resettlement program are continuing as the US struggles to contain the pandemic that has killed more than 93,000 people there.

Thirty-five refugees departed Port Moresby on Thursday morning bound for the US via Singapore, and one refugee is due to fly to Finland, according to sources and documents obtained by SBS News.

Advertisement
A handful also departed Australia for the US this week, including several from the Kangaroo Point hotel being used as an “alternative place of detention” (APOD) in Brisbane and from community detention in Melbourne.

“Finally after 7 dark years, I'm leaving to USA today,” he posted before boarding the flight in Port Moresby.

“I’m going to be free forever and it's amazing and exciting for me but still the happiness (is) incomplete because as long (as) many innocent refugees and asylum seekers (remain) in unlawful indefinite detention for 7 years in offshore and onshore.

“To all beloved brothers and sisters in Australia… allow me to thank you for all your efforts and support for the last 7 years.”

The men are due to arrive in Los Angeles and then be resettled in 18 cities across the US.

A network of Australians in the US called Ads-Up For Refugees has been preparing for their arrival and fundraising to support their resettlement with the added complication of the coronavirus pandemic.

"These guys are landing with barely more than the clothes on their backs and they’ll be looking for work alongside millions of recently unemployed Americans.

"Since COVID-19 hit, more than 100 refugees reached out to us for help, they’ve lost jobs and are struggling to pay rent and for basic supplies.

Rohingya refugee Anwar once detained on Manus was connected with Australian behavioural neuroscientist Lisanne in Chicago earlier this year through Ads-Up. Source: SBS / , Ads Up

Many of the refugees have underlying health conditions after years of detention and medical neglect on Manus Island and Nauru.

"Their condition puts them at higher risk from COVID-19," Mr Winsor said.

"We are in daily contact with two refugees in Texas who have contracted COVID-19."

On Tuesday, a number of refugees in Port Moresby celebrated their imminent resettlement under the Australian-US scheme with priest Giorgio Licini, the general secretary of the Catholic Bishops Conference of Papua New Guinea & Solomon Islands.

“They were relaxed but had mixed feelings, especially that there are still some left behind, many are those who were never given refugees status and could not go home,” Father Giorgio said.

“We understand that somehow the Australian government wants to finish the US option, they should finish this thing as soon as possible, it makes no sense to prolong this agony.”

Refugees and their advocates celebrate in Port Moresby their imminent resettlement in the US. Source: SBS / , Father Giorgio Licini

Father Giorgio said the men did not undergo coronavirus isolation in preparation for their departure.

“They were in the hotel where they stayed most of the time, they underwent the regular medical procedures, but no COVID-19 quarantine,” he said.

“PNG is in quite a good situation and there is no trace of the virus. Life here is 95 per cent normal.”

A Home Affairs spokesperson did not comment on the latest departures, saying that Australia remained fully committed to the US resettlement program.

Asked what COVID-19 quarantine measures and checks were undertaken, the spokesperson responded: "Refugees are required to undertake a range of US mandated pre-departure preparations."

In Senate estimates in March, the Home Affairs Department said 702 refugees had been resettled in the US under the agreement reached by then Australian prime minister Malcolm Turnbull and US president Barack Obama in 2016.

Under the deal, up to 1,250 refugees who were in offshore processing on Manus Island and Nauru could be resettled in the US at its discretion after clearing “extreme vetting” procedures.

The department said a further 260 were approved but had not yet departed, and some were transferred to Australia under the now-repealed medevac laws for medical treatment.

Home Affairs told the Senate committee that 211 refugees and asylum seekers remained on Nauru, 228 in Papua New Guinea, and about 1,220, including their dependents, were in Australia to receive medical treatment.

Officials said the US aimed to finalise interviewing candidates by “mid-year”.