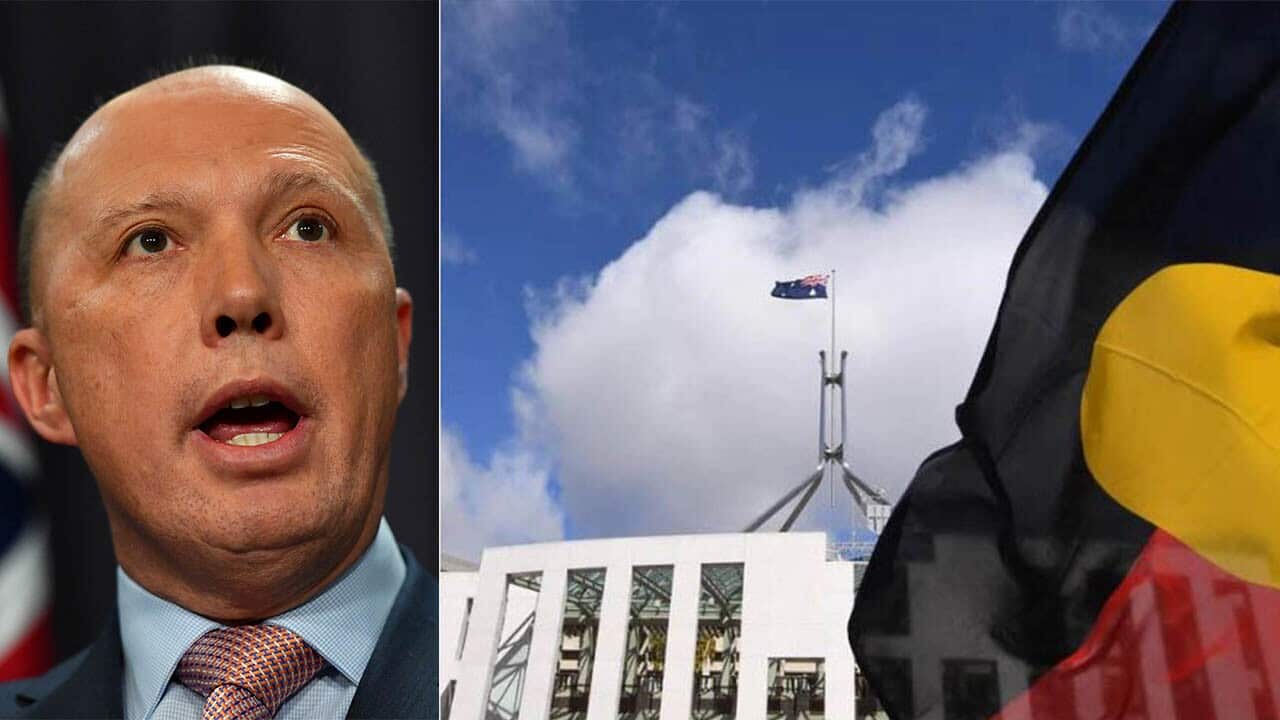 The federal government is set to pursue symbolic-only recognition of Indigenous people in the constitution, in a major blow to Indigenous leaders calling for a "voice to parliament" to be enshrined in the founding document.

Less than two days after Indigenous Australians Minister Ken Wyatt was hailed for laying out a pathway to hold a referendum on Indigenous constitutional recognition within three years, a backlash from conservative MPs has forced the government to clarify its approach.

Senior minister Peter Dutton indicated on Friday that the government would pursue symbolic-only recognition in the constitution.

"We're not in favour of a third chamber or a separate voice," Mr Dutton told the Nine Network on Friday.

Peter Dutton says the government will not pursue an Indigenous voice to parliament. Source: AAP

"We've got a very strong democracy, we want to see more Indigenous people in the parliament, and it's great that Ken Wyatt is the first Indigenous affairs minister."

Mr Wyatt's commitment to hold a referendum on Indigenous constitutional recognition revived hopes of substantive change that would give Indigenous people a say over laws concerning them.

Conservative government MPs are resisting the creation of an indigenous voice to parliament. Source: AAP

The idea was a key proposal endorsed by more than 250 Aboriginal and Torres Strait Islander people in the landmark 2017 Uluru Statement from the Heart.

It was immediately rejected by then-Prime Minister Malcolm Turnbull, who described it as a "third chamber" - a claim Indigenous advocates have repeatedly rejected.

Mr Wyatt said on Wednesday that all options were on the table, but on Friday he described the voice to parliament as "problematic".

"If the voice fails in any referendum, and if we were to put it up and it was not going to be accepted, then it is folly. We cannot do that.

"We have to look at practical solutions that realise better outcomes for our people. More importantly, not put up models that will fail."

He acknowledged that position would disappoint some people that have been campaigning for substantive change.

Thomas Mayor, who is involved in the union movement, says a voice to parliament would empower Indigenous people. Source: SBS / , NITV News

Indigenous advocates have urged Mr Wyatt to "stand strong" against critics in his own party room and pursue a representative body.

“If it’s only symbolism, it’s not worth going ahead with,” Torres Strait Islander Thomas Mayor told SBS News on Thursday.

But speaking in Karratha in Western Australia, Mr Wyatt said Indigenous people there had other priorities.

"People need to get out and listen to what's being said on the ground including some of our leadership."

He said a representative body could instead be established through legislative, rather than constitutional, change.