Questions have risen over Home Affairs Minister Peter Dutton's decision to use his ministerial discretion powers to grant visas to two foreign tourists. 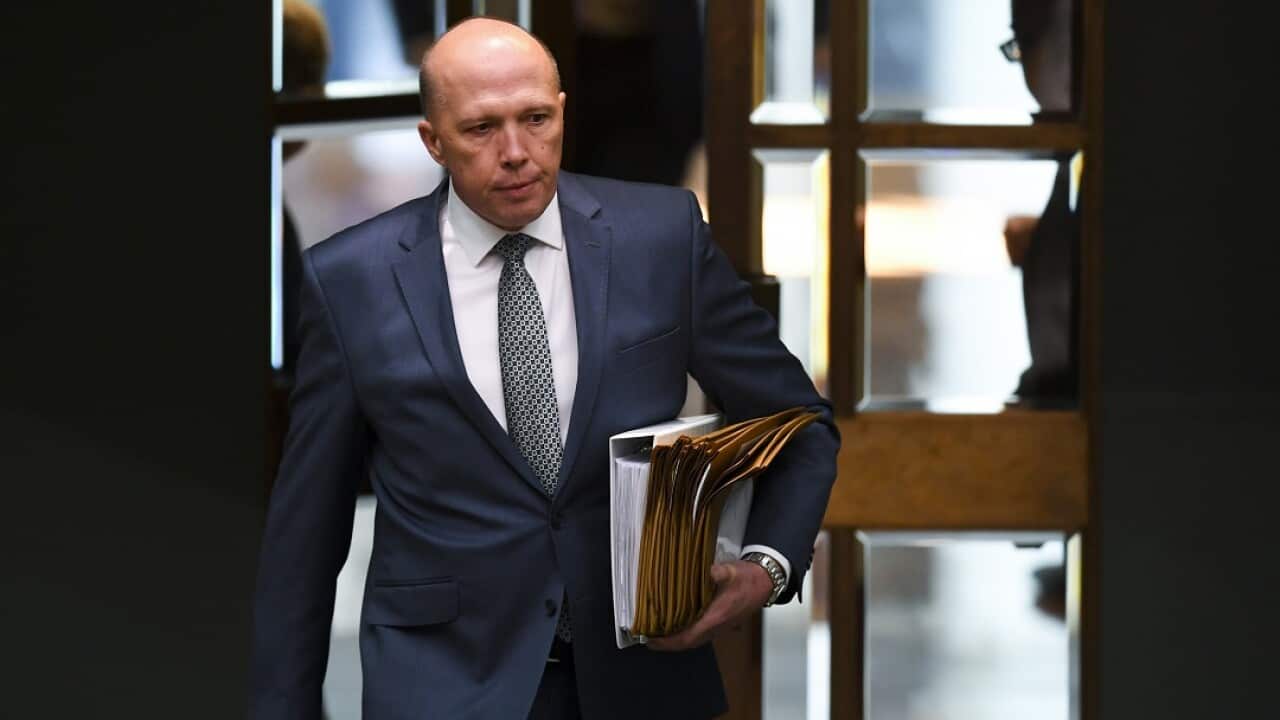 Australian Home Affairs Minister Peter Dutton has spoken out about the granting of a visa at the last minute to a young tourist to stay and work as a nanny. Source: AAP

Mr Dutton was asked about his June 17, 2015, decision to grant a tourist visa to a foreign au pair during parliamentary question time on Monday and also referred to a second case he intervened in on November 1, 2015.

The minister said he doesn't know the individuals involved.

Advertisement
"Our family does not employ an au pair," Mr Dutton told parliament.

"My wife takes very good care in my absence, I might say, of our three children. We have never employed a nanny."

Mr Dutton said he has intervened in hundreds of cases to either grant or cancel visas and takes the responsibility "extremely seriously".

"I am particularly proud of my record of cancelling the visas of criminal motorcycle gang members, serious criminals and child sex offenders," Mr Dutton said in a statement.

In the first case, a young woman had her eVisitor visa cancelled at the Brisbane International Airport which rendered her an "unlawful non-citizen" under migration laws.


"I thought if they gave an undertaking they wouldn't work I would grant the tourist visa, they would stay, which they did, they didn't overstay, they returned back home," Mr Dutton told parliament.

AAP understands she made a phone call to a contact while detained at the airport.

A document tabled in parliament shows the woman was granted a tourist visa (subclass 600) after Mr Dutton used his ministerial discretion to intervene in the case.

In the second case, Mr Dutton intervened to grant a visitor visa (subclass 600) to another potential baby-sitter.

"There are clear indications that x is intending to work in Australia and thus, the grant of a visitor visa is of high risk," said a heavily blacked out ministerial submission obtained by AAP under freedom of information laws.

Australian Border Force noted the woman had been "counselled previously with respect to work restrictions," when suspicions about her intentions were aroused on a previous arrival on October 31, 2015.

Analysis of ministerial discretion statements for 2015 tabled in parliament shows the bulk of these visas are granted to asylum seekers requiring bridging or temporary humanitarian visas or former residents returning to Australia.

An au pair is a person under 30 who travels abroad for a temporary period and lives with a host family. They generally receive free board, meals and spending money in exchange for child care and light housework duties.

AAP is now awaiting an outcome from the Administrative Appeals Tribunal.

Ministerial standards under the Turnbull and Abbott governments state: "it is critical that ministers do not use public office for private purposes."

"Ministers are required to ensure official decisions made by them as ministers are unaffected by bias or... considerations of private advantage."

"Ministers must ensure they act with integrity - that is through the lawful and disinterested exercise of statutory and other powers available to their office."

Mr Dutton said there has been no breach.

"In my capacity as a minister I have never acted outside the ministerial code of conduct," Mr Dutton said in a statement to AAP.

The department's lawyer Brooke Griffin argued at the tribunal hearing that disclosure of personal information of the au pairs, including country of origin, employer and conversations with Border Force officials, would be unreasonable because it would breach privacy and make them identifiable.

"There is no evidence whatsoever, before the tribunal, of any personal link between the minister and the affected third parties in this case," she argued.

"Nor could it be said that the release of the personal information ... will shed any light whatsoever on the allegation... at the moment it is mere speculation."

Tribunal member Chris Puplick, a former Liberal senator, promised to make a decision on the case "reasonably expeditiously" but gave no time frame.