Residents in the coastal town of Eden on the NSW south coast have survived the Border fire for now, but say the damage will take months to recover from. 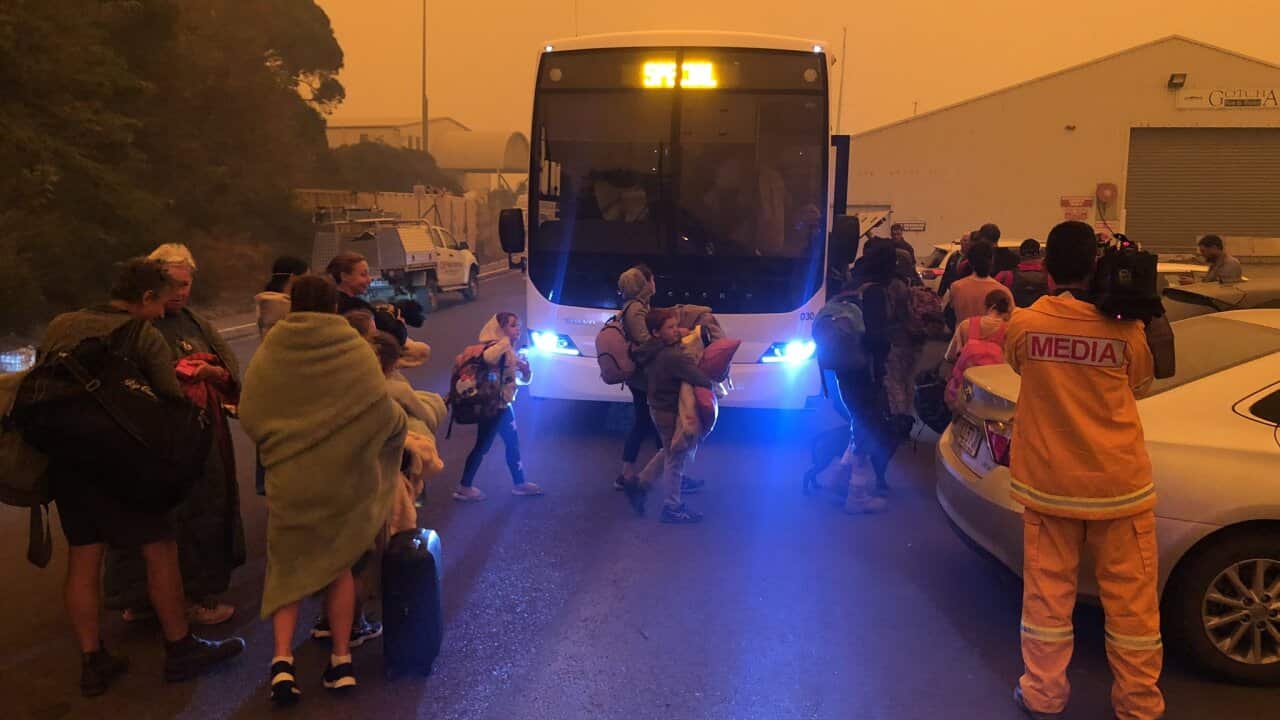 Residents have been allowed to return to their homes in the NSW town of Eden in the state's far south after facing the rapid approach of a large fire, arriving days earlier than expected.

The Border fire has scorched 271,000 hectares since igniting west of Victorian town Mallacoota.

Advertisement
With a population of just over 3,000, residents in Eden had to make a difficult choice as the fire approached within kilometres of the town.

Some residents decided to stay and defend their properties, but for others it was a sleepless night as they took refuge on the town's wharf, close to the water.

One resident told SBS News he is thankful to have come out of the incident alive.

Peter with other locals in Eden watch the smoke from a large woodchip pile, near the local mill, which caught fire. Source: SBS

"I just shook the hands of firies up the street there before. We'd be stuffed without them," Peter said. "We've dodged a bullet."

But he said it is too early to tell the extent of the damage to the town.

"When it started to rain last night it was a godsend. But I don't think we're out of the woods yet."

The local timber mill, which is the town's biggest employer, has been damaged by the fires with the true extent of the damage not yet know. A pile of woodchips from the mill went up in smoke.

Resident John Groom said that means his cousins and uncles have lost their jobs.

"I don't know where they are going to end up from here."

As for his home, Mr Groom, says that has been burnt to the ground.

The Eden Rural Fire Brigade has posted a video on Facebook showing the kind of conditions they faced as smoke obscured the skies.

"Trees down, fishing club is still there," a firefighter is heard saying as they drive through the town.

On Sunday evening, Australia's largest navy ship, HMAS Adelaide, arrived in Eden where it will be based for several days to assist with the bushfire support effort.

Four hundred troops are aboard the HMAS Adelaide, in addition to 300 tonnes of emergency supplies.

The night before residents had taken refuge at the town's wharf, close to the water, as the Border Fire rapidly approached.

Former local cruise company owner Roz Butt said it has been "devastating" to see so much of the town destroyed.

A long-time resident, Ms Butt says the fire overnight has been unlike anything she has ever encountered.

It's pretty horrifying [to see the damage]. I've lived here since I was four years old. I've never seen anything like this before."

The NSW RFS is still assessing just how many homes have been destroyed during the catastrophic fire conditions on the weekend. The initial figure stands at 60 for the state, bringing the total number of properties destroyed statewide this season to 1,482.

Ms Butt said residents not only feel exhausted, they also dread the drop off in tourism numbers that will inevitably follow.

"There will be a lot of small businesses no doubt who won't be able to handle what they're going to lose through tourism.

"[To have] people not coming. It's just devastating."