Turkey's President Recep Tayyip Erdogan has threatened to allow tens of thousands of migrants to flood into Europe unless the European Union restarts talks to allow Turkey to join the block. 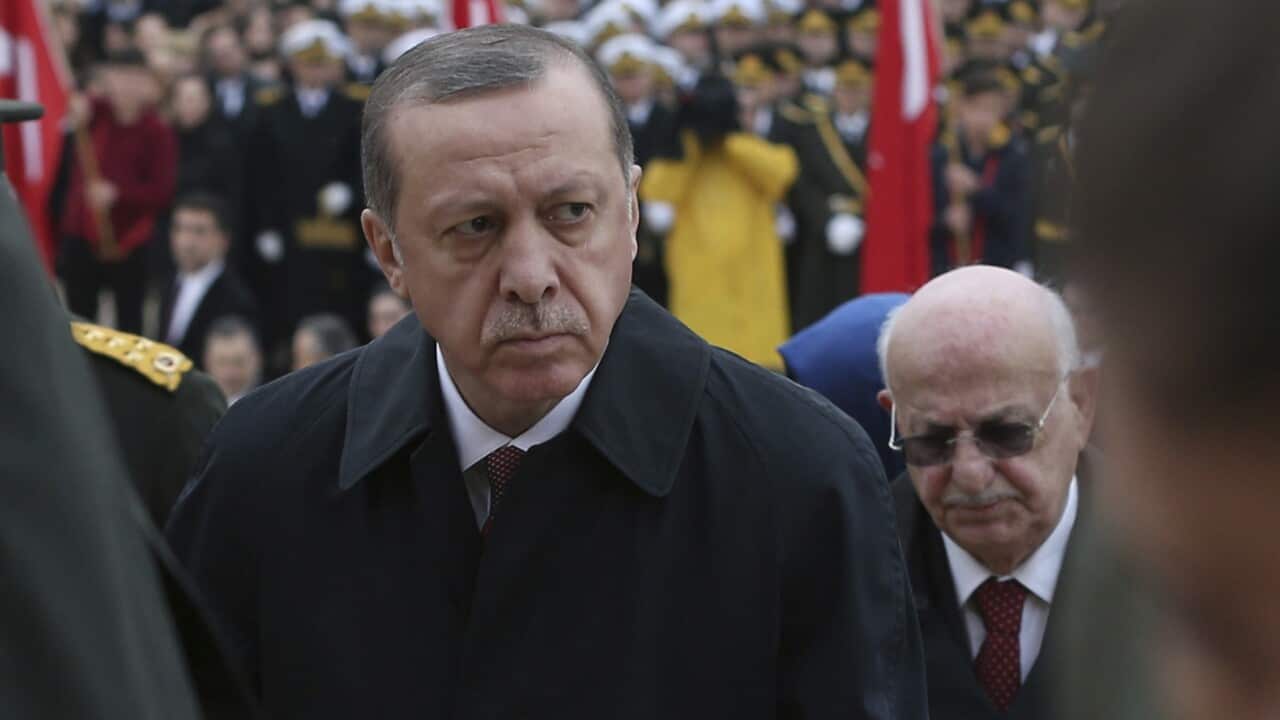 Turkish President Recep Tayyip Erdogan on Friday threatened to throw open Turkey's borders to illegal migrants after the European Parliament voted to back a freeze in membership talks with Ankara.

"Listen to me. If you go any further, then the frontiers will be opened, bear that in mind," Erdogan told the European Union (EU) in a speech in Istanbul.

On March 18, Ankara and Brussels forged a deal for Turkey to halt the flow of migrants to Europe - an accord that has largely been successful in reducing numbers crossing the Aegean Sea between Turkey and Greece.

Advertisement
Turkey agreed to step up maritime and land border controls in exchange for incentives on its long-stalled membership bid, including visa-free travel for its citizens and an acceleration of accession talks.

However with an October target passing and no apparent progress on the visa issue and accession talks stalled, Ankara has stepped up accusations that Brussels was not keeping its side of the bargain.

The latest setback was the vote on Thursday by the European Parliament to freeze membership talks, a move prompted by alarm over Turkey's crackdown after an attempted putsch.

But the resolution is non-binding and has not been backed by the European Commission or almost any member states.

Erdogan said that the EU had cried out for help in 2015, as tens of thousands of migrants massed at the border crossing with EU member Bulgaria.

"You began to ask us 'what will we do if Turkey opens its borders'?" he asked.

Around one million migrants from poverty-stricken countries and refugees from wars crossed into Europe in 2015, raising fears of a social crisis in the EU and strengthening the hand of right-wing nationalist parties.

Germany said "threats" were "not helpful" on the EU-Turkey migrant deal after President Recep Tayyip Erdogan on Friday warned he could drop border controls, allowing a flood of migrants into the bloc.

"We see the EU-Turkey agreement... as a success for both sides. And the continuation of this agreement is in the interest of all parties," Chancellor Angela Merkel's spokeswoman, Ulrike Demmer, said.

"Where there are difficulties, we need to resolve them."

On March 18, Ankara and Brussels forged a deal for Turkey to halt the flow of migrants to Europe, an accord that has reduced numbers crossing the Aegean Sea between Turkey and Greece.

But Erdogan threatened Friday to open Turkey's borders again after the European Parliament voted to back a freeze in EU membership talks with Ankara.

Merkel was a driving force behind the deal, which helped slow the influx of refugees and migrants into the EU and its biggest economy, Germany.

The German chancellor saw a bruising backlash amid the mass influx, which saw almost 900,000 asylum seekers arrive in Germany in 2015, sparking a rise in racist hate crimes and boosting a right-wing populist party.

But Merkel's approval ratings have since recovered as arrivals have slowed, boosting the chancellor as she heads into an election campaign seeking a fourth term in the September or October 2017 vote.