Esther missed out on the polio vaccine. Her children won't miss their COVID jabs

Polio survivors in Australia share their views on the importance of getting vaccinated against COVID-19, particularly as schools prepare to welcome children back. 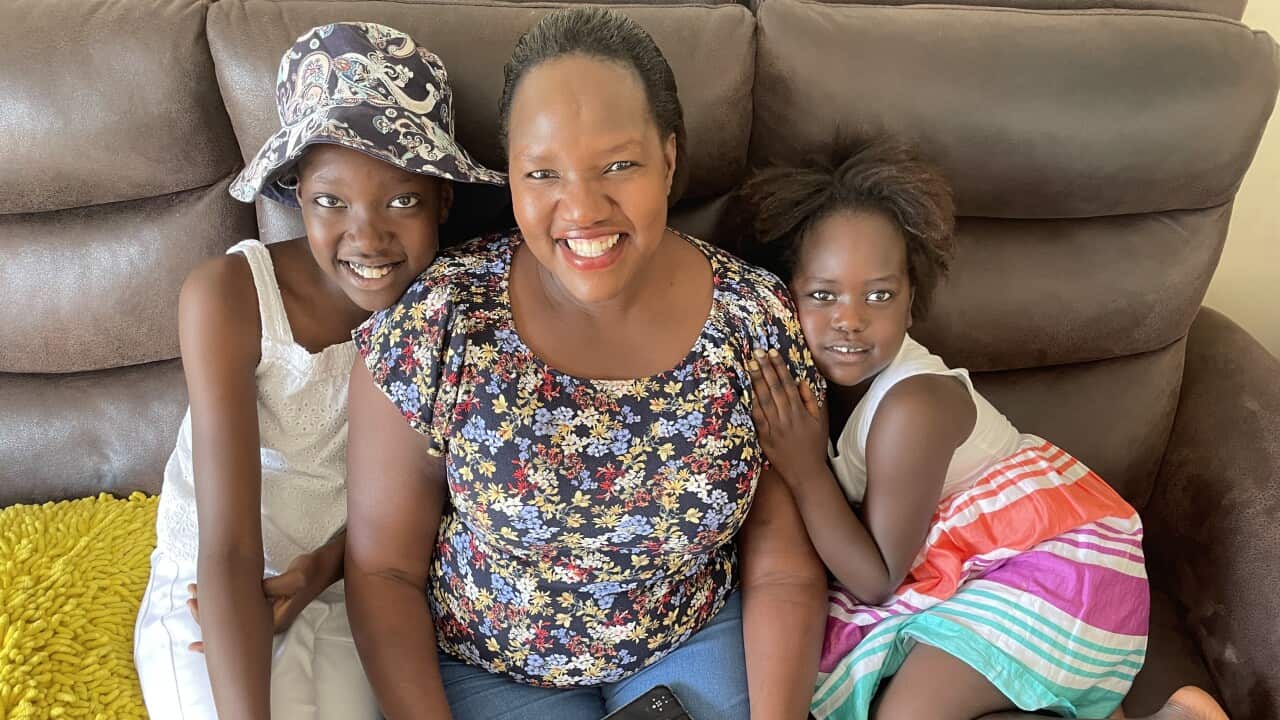 Esther Simbi is determined to get her daughters vaccinated against COVID-19. Source: Peta Doherty/SBS News

Esther Simbi never had the chance to get vaccinated against the debilitating and sometimes fatal polio virus.

"When I was born in South Sudan, at the time there was no vaccination, and many people, including me, contracted polio," she said.

“I was four years old in a village called Lomura. There was no protection, and I've been living with a disability since - living with the weaknesses of my leg and lower back."

Advertisement
Esther missed out on one crucial vaccine, but now in South Australia and raising two young daughters – aged 11 and six – she is determined to get them vaccinated against COVID-19.

“The reason why I want my children to be vaccinated is for protection," she said.

"Some people are dying when they contract COVID, especially if they have underlying health issues. And my younger one, she was born with congenital lung disease."

Polio is caused by a highly infectious virus that can impair the body's central nervous system, disrupting muscle development and, in some cases, causing paralysis.

"My muscles weaken every year. Now I found I use the wheelchair more than even five years ago," said Esther, who is a published author as well as a project officer for a disabilities support organisation.

"My left leg is completely weak, my physiotherapist wondered how I even walked."

The first polio vaccine was developed by American virologist Jonas Salk in the 1950s. Medical researcher Albert Sabin invented an oral vaccine in 1955.

Today, in large part because of child vaccination, polio has been eradicated in all but two countries; Pakistan and Afghanistan.

'My life would've been different'

Australia experienced its last major polio outbreak in the 1950s. Shirley Glance contracted polio during that outbreak - she was just 14 months old.

"I was just starting to walk and my mother noticed that I kept falling over,” said Shirley, who is the president of Post Polio Victoria.

"I was diagnosed with polio and I've lived with it since. Children were taken away from families, they were isolated because they didn't know how far it would spread.

“I'm not complaining about the life I've had, but my life would’ve been different had I had the polio vaccine."

Robyn Abrahams, a former nurse and management consultant who is also based in Victoria, contracted polio in 1953 as a three-year-old.

"I remember being tied to the bed by all fours. They put us in big long splints to keep us straight and rigid," she said.

“If I was prime minister for a day, God help us all; one of the things would be there is no discussion about vaccination of any type,” she added.

“Be it from measles to coronavirus, you will all be vaccinated because our health system can’t afford you not to be.”

Vaccines were crucial to the eradication of polio in Australia. Source: State Library of New South Wales.

On 10 January, Australia started COVID-19 vaccinations for children aged between 5 and 11. While many parents rushed to get their children vaccinated, the move was also met with hesitation.

Vaccines were also crucial in getting children back to school, she added.

“From a parent perspective, I'm actually really pleased that we had both the clinical trial as well as that safety surveillance data before we rolled out our program.”

"I'm also really, really supportive of our kids being in school, face to face learning, whenever they possibly can be, and I think a vaccine program adds that extra layer of protection."