A Vietnamese-born former refugee is undertaking a month-long walk from Melbourne to Canberra - taking with him a replica of the boat which brought him to these shores. 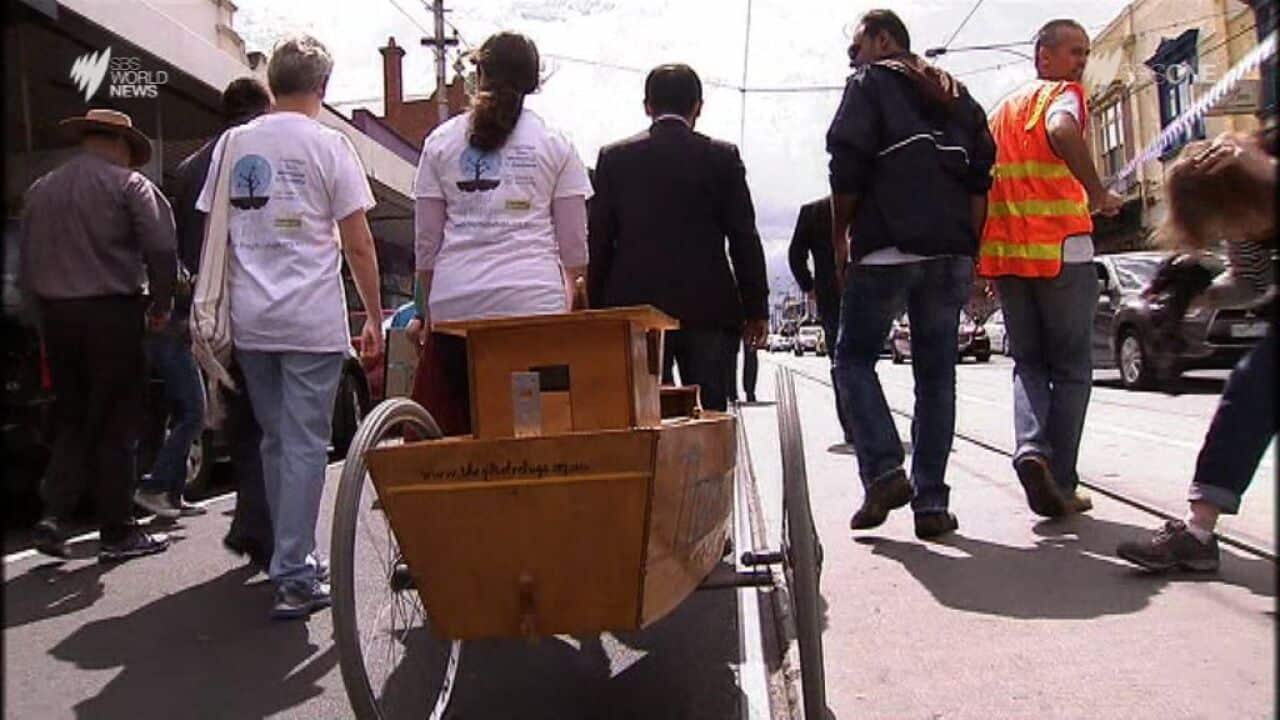 It made for an unusual sight.

A Vietnamese-born man with a timber boat on wheels strapped to his belt.

Hundreds of supporters followed him for the first few blocks up Melbourne's Sydney Road.

“See you in Canberra!” he yelled, before the hundred or so supporters responded with a cheer.

Tri, now a Baptist Pastor, fled post-war Vietnam with his father and sister.

"Saying thankyou to Australia for the gift of refuge that I and my father received when we came to Australia in '82."

Tri's father crafted the replica of the boat they escaped Vietnam on. Nang Ngyuen is now a sprightly 70-years old, and says the boat is a profound symbol both of freedom and desperation,.

The boat means the world to Tri, who vividly remembers the eventful voyage from Vietnam. The first part of the trip was spent in a cargo hold before his father let him out among the adults.

“He took me above the deck and I was overwhelmed - I've never seen the ocean anything like it and nothing else for miles and waves upon waves and it was dark and raining, ” Tri remembers.

But Tri says he’s still traumatized by the experience of the boat trip and subsequent period in a refugee camp.

After that experience, Tri says he is still overwhelmed at the hospitality, meals, friendship, and even holidays strangers willingly gave his family when they arrived in Australia.

“Still no word of English, but we were loved and welcomed and treated like family rather than strangers and that's the Australia that I know and the Australia I have become so grateful for.”

Once in Canberra, Tri says he'll donate the timber replica to Parliament as a symbol of thanks, but it'll be accompanied by a respectful but emphatic message about asylum seeker policy;

“Let's remember where we have come from, let's look at a more humane way of processing people.”

Tri and his entourage will chip away at the 35-day walk at about 20km a day, stopping and sharing the story at several regional centres and small country towns along the way.

After departing Melbourne, he’ll visit towns including Wallan and Seymour, then proceed through North East Victoria to Benalla and Glenrowan, Chiltern and Wodonga.

In southern NSW, he's planned stops in Gerogery, Henty, Wagga and Yass before a scheduled arrival in the nation's capital on Good Friday.

Country towns, he says, epitomized the Australian spirit which captivated him while on school holidays.

Tri admits he'll be a “bit sore” by the time he hits Canberra, but hopes his message resonates.

"You need to do something a bit crazy in order to get attention!", he says.