In the latest issue of the American journal Language, some unique findings by an Australian linguist has put a small Northern Territory town on the world stage. 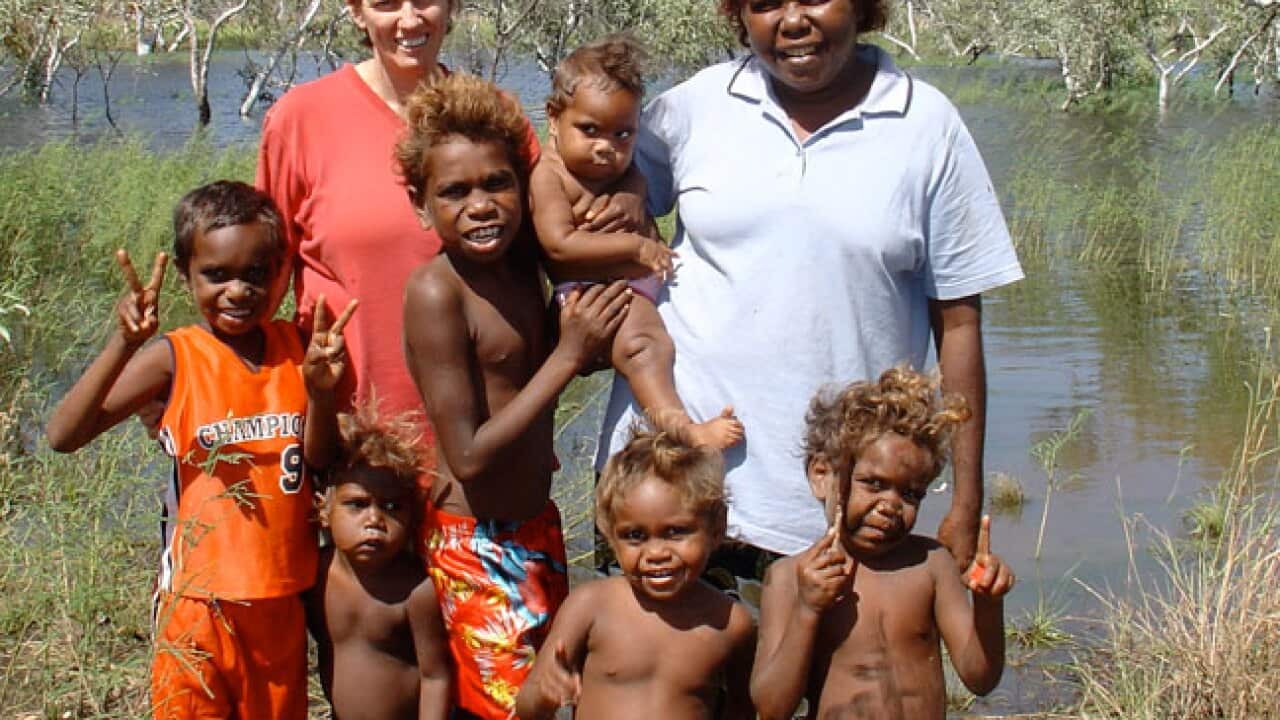 In the latest issue of the American journal Language, some unique findings by an Australian linguist has put a small Northern Territory town on the world stage.
Advertisement

In the town's community of around 700 people, its younger generations have been talking... in a completely new way.

In the red-earth centre of the Northern Territory's Tanami Desert, is the town of Lajamanu.

On a map, it's a tiny dot with an airstrip, roughly one thousand kilometres from Darwin, and the same from Alice Springs.

While teaching in the town in 1998, Professor Carmel O'Shannessy, an Australian linguist now based in the United States, noticed something odd about its young people.

"While I was there working with the teachers to support them to teach Warlpiri and English, I noticed a lot of code switching, which is switching between two languages in a single conversation or a single sentence and I thought that there might be something linguistically very interesting going on here and so I asked the community if I could research it to find out more about how the young people were speaking."

Professor O'Shannessy says it didn't take long for her to uncover the remarkable.

"It was fairly early on after I had started recording the children speaking to each other and then I would write down everything I had recorded and then I would look through it to try and find the structural patterns if there were any. What kinds of words they were using and what kind of grammatical patterns they were using and it became very clear about this pattern between the verbs from one type of language and the noun structure from the other and then also the new structure within the verbs system became very clear as well and that was when I realised, gosh, this is amazing, you know, something really interesting is going on here that this is actually a new independent system."

What Carmel O'Shannessy had found were the beginnings of what's been described as the world's newest known spoken language.

Called Light Walpiri, it's a mix of the town's traditional Aboriginal language Warlpiri, English and Aboriginal English known as Kriol.

Here, a young girl reads to Professor O'Shannessy from a story book.

"The little girl pushed the boy on the swing. And the dog was there. The monster came. It got the dog."

"The interesting thing about this language is the types of structural combinations that it has. So it draws most of its verbs and all of the grammar of verbs from English, Aboriginal English and Kriol, but the rest of the grammar in the language is mostly from Warlpiri. And Warlpiri and English are very different types of languages, they're completely different systems that are sort of opposite each other. And so it is very interesting the way in which speakers have spliced together the verbal grammar of one language and the noun grammar of another language. And then the super interesting thing is that in additon to doing that, they brought in some new structures which come ultimately from all of those languages but they have re-analysed them in a way that what we end up with is a new structure that's not the same as any of the languages that it comes from."

Felicity Meakin is a researcher at the University of Queensland who specialises in Aboriginal languages.

She's clear about the signifcance of Light Warlpiri's discovery.

Professor O'Shannessy agrees she was fortunate to be able to witness the birth of the new language.

"It's pretty remarkable, languages probably come around a lot but we don't always have someone there to observe them and document exactly what has happened. Normally we find out about a phenomenon like this well after it has already been established and then we try and work out well what do we think was happening at the time. But in this case I am in the extremely fortunate position of being able to document now how people continue to speak Light Warlpiri and Warlpiri and to see what kinds of structural changes or stabilisations take place as it unfolds and this is a rare opportunity."

Due to the Lajamanu's isolation, she says locals were forced to travel more than 600 kilometres for food, family and ceremonies.

"Because of the wet season the road to the south is not good all year round and just because of the geographic location the people in Lajamanu tend to go to Katherine quite a lot and Katherine is a Kriol speaking area and so they are interacting a lot with people who are not speaking Warlpiri. So I think that did play a role."

Professor O'Shannessy says Light Walpiri is also a response to strong pressures on speakers of Indigenous languages to shift to English.

Since 2009 government policy has seen schools like that in Lajamanu teach the first four hours of classes in English.

Profesor O'Shannessy says Light Walpiri then, is a mixed blessing - a kind of cultural compromise in allowing a partial shift towards speaking more English but also a resistance to shifting all of the way.

Professor Felicity Meakin from the University of Queensland agrees it's an assertion of cultural identity.

"We know that of the 300 or so traditional languages that were spoken in Australia there's only around 12 that are still being learnt by children. So we could consider these languages to be new languages, we could also consider them to be continuations of the traditional langages but in an expression that sort of suits teenagers who are living in a different world from the old generation."

For him, both Light Warlpiri and Gurindji Kriol are crucially important signs.

"We face this very bleak picture of language loss and of the loss of fifty thousand years of incredibly rich, complex linguistic heritage on our continent, and languages are being lost on this continent faster than any continent on Earth, so if you like you can see this as a glimmer of hope that not only are things being lost, things are also being recreated and I think that is very important."

In Lajamanu, Light Warlpiri is created, shared and passed on among the town's younger generations.

But Carmel O'Shannessy says it's also understood by their multilingual elders.

"I think that the adults who are now aged 35 are the ones who really galvanised this system when they were little children and now they have passed it down to the next group of children and so on. Everyone can understand it because everyone is multilingual. People in the community speak, the Light Warlpiri speakers, speak Warlpiri, the traditional language, Light Warlpiri and they speak varieties of English and some Kriol and all the speakers speak Warlpiri and varieties of English and Kriol and because that's where Light Warlpiri comes from then everyone can understand each other perfectly but different people are choosing to speak with different linguistic systems."

But Nicholas Evans from the Australian National University, says this question may be all wrong to start with.

"It's so widely believed among many people in Australia that humans are fundamentally monolingual and that we have to choose and that Indigenous kids have to choose. Are they going to maintain their traditional language or are they going to speak English? And I want to say that I don't believe that humans evolved to be like that and human brains are like that. We can comfortably accommodate many languages. And it seems that each one we add makes it easier to learn another one. And it is quite remarkable and interesting in this case, that this mixed lanugage this new lanuage is not replacing the others it is another one that is being added on to it. Those kids also know traditional Warlpiri, they also know Kriol and as they enter the school system they also know English or learn English. and there is not a conflict as long as we go in with the right attitudes. And say ok let's accept this. Let's celebrate it."