The independent senator has stood by his controversial remarks about Sarah Hanson-Young in an interview with SBS News. 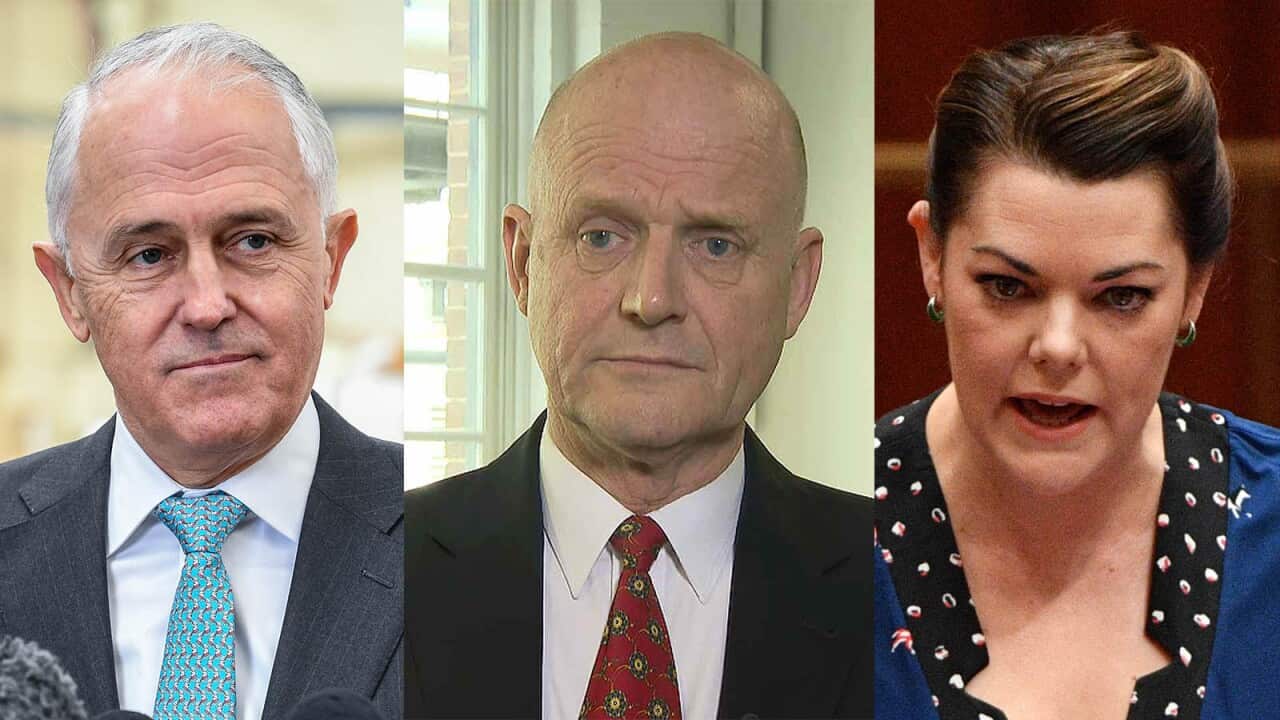 David Leyonhjelm has hit back at Malcolm Turnbull's calls for him to apologise to Sarah Hanson-Young, saying he "should stop being such a pussy".

Independent senator Mr Leyonhjelm's comments were made in an interview with SBS News on Tuesday.

They followed the prime minister's calls for Senator Leyonhjelm to apologise for telling Greens senator Ms Hanson-Young to "stop shagging men" during a debate in federal parliament last week.

Advertisement
"The Senate is a robust place, all kinds of language gets used in [there]," the NSW Liberal Democratic Party Senator told SBS News.

"I think the Prime Minister is being a bit disingenuous if he hasn't heard that [sort of language] in the House of Representatives before."

Senator Leyonhjelm said his comments came in reaction to what he claims is Senator Hanson-Young's "misandry", meaning an ingrained prejudice against men.

Prime Minister Malcolm Turnbull has called for the church figure to step down. Source: AAP

Senator Leyonhjelm claimed that Senator Hanson-Young "thinks all men are responsible for violence against women."

"That's offensive to men", he said, and that prompted his remarks.

He said he "won't be apologising or withdrawing" his remarks unless certain conditions are met.

"I've nominated conditions under which I would apologise, they include an acknowledgement by Sarah Hanson-Young that not all men are responsible for crimes that are perpetrated by some violent people, that we are individually responsible for what we do, and that women should be entitled to carry measures for their own protection and self-defence," he said.

Senator Hanson-Young denies it was ever her belief that men are collectively responsible for the actions of others who commit violence.

Hanson-Young not backing down

The senator said it was about time someone spoke up about sexism in parliament.

"You don't, because you're losing a political argument, reduce the discussion or the debate down to sexist slurs and sexual innuendo, and that's what David Leyonhjelm has done," she told Radio National on Tuesday.

She said she'd "had enough" of men in parliament using sexism "as part of their intimidation and bullying on the floor".

Greens Senator Sarah Hanson-Young was surprised to hear reality television would be supplied to the Pacific at taxpayers expense. Source: AAP

Speaking in Adelaide, Senator Hanson-Young said she had been the subject of rumours and remarks during her ten years in parliament and it was hard to ignore.

"I've tried to ignore the mutterings… the rumour mill: 'Did you hear she slept with such and such?' ... 'I heard you had a good night' ... 'What are you wearing that for?" she said.

"There's one particular senator who says to me every time I'm in an argument, every time I am stripping his argument to pieces: 'Why don't you smile at me, Sarah?'."

Asked on the Nine Network if she believed all men are rapists, Senator Hanson-Young said: "no, I do not, but I do believe that David Leyonhjelm is unfit to be in the Australian parliament".