Despite once approving the offshore processing of refugees, Sprent Dabwido – who has terminal cancer and is receiving treatment in Australia – says he now wants to see an end to the practice. 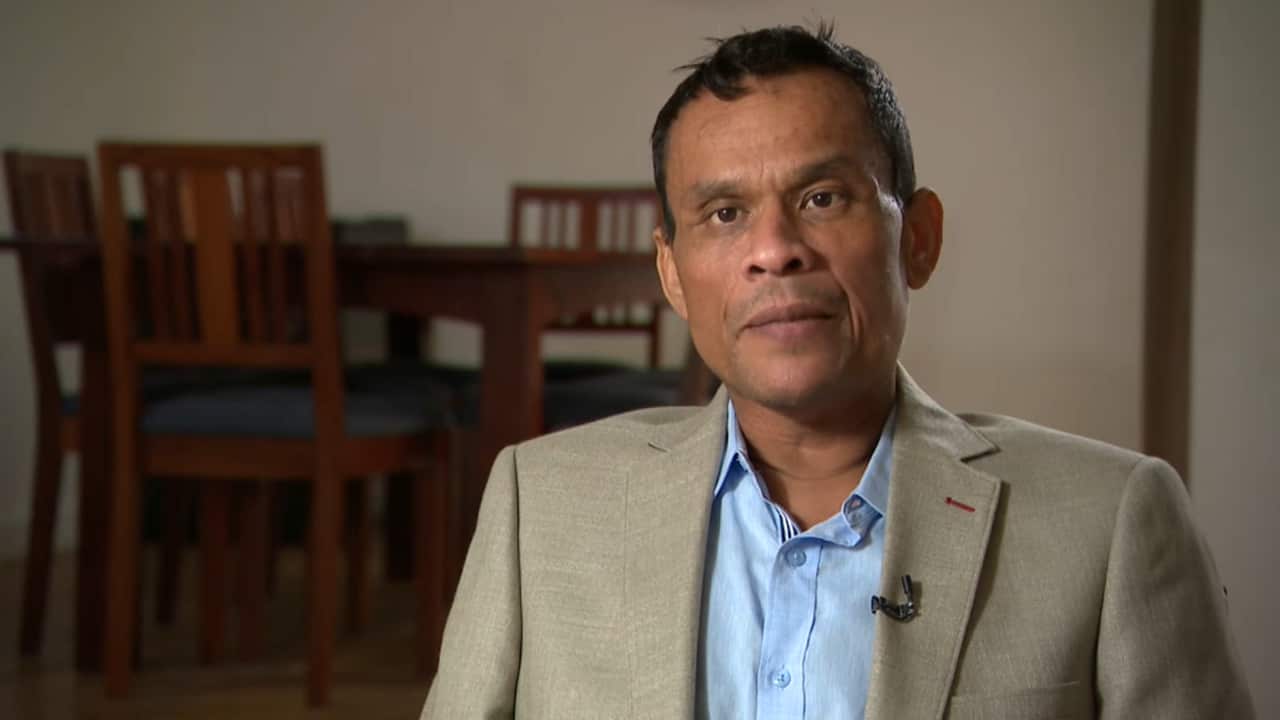 The former president of Nauru - who reopened the detention centre in the Pacific island nation - has called for an end to the offshore processing of refugees, as he awaits the result of his own asylum seeker bid in Australia.

In 2012, Sprent Dabwido struck a deal with then-Australian prime minister Julia Gillard for his impoverished island nation to once more be used for offshore processing, costing taxpayers hundreds of millions of dollars.

He told the media at the time Nauru was proud to be able to help Australia in its time of need.

Advertisement
“The prime minister has assured us they [the refugees] won’t be there forever, if the process is as quick as possible, that’s what we all prefer,” he said.

It’s a deal he now regrets.

“The arrangement I had, I thought I was helping, but it’s been changed. It became from a helping hand to a closed fist, and that’s a big regret,” he told SBS News last week.

Mr Dabwido said the original contract seemed to be a “good arrangement” to prevent “queue jumpers” in the system.

“I thought it good policy because eventually, they get in [to Australia],” he said.

“But along the way it’s been changed and [Australia] says people will never get in. The decision made by this Australian government is not the one I signed.”

Mr Dabwido now supports the Medevac bill - which will see some sick refugees being flown off the island for medical treatment.

“Every death on my island by an asylum seeker is a regret,” he said.

“It is time to end processing on Nauru ... it is hurting Nauru as much as it is hurting Australia, it has turned my island upside down.”

Every death on my island by an asylum seeker is a regret. - Sprent Dabwido

Prime Minister Scott Morrison has warned any changes to the offshore detention policy would lead to a return of people smuggling.

As the last four children left Nauru
for the US last month, Mr Morrison said: “There is still much more work to do. But I will tell you this: you cannot get kids off Nauru just to see your borders fail and then you put them back on.”

Mr Dabwido was diagnosed with throat cancer last year after a tumour was found in his neck. It has since spread to other parts of his body and the diagnosis is terminal.

The 47-year-old says the irony is not lost on him.

“I never thought I’d be one of the people lining up to be an asylum seeker, especially when I gave the go-ahead so [Australia] can use Nauru,” he said.

Treatment for his condition is not available on Nauru.

Mr Dabwido during his time as president. Source: AAP

He speaks to SBS News at a house being rented by his family, near the Sydney hospital where he is receiving radiation therapy. It is being funded by Medicare.

“What would the Australians think of me? You put these people on your island but you come [here].”

'Enemy of the state'

The basis of Mr Dabwido’s claim for asylum is that the current Nauru government have categorised him as an “enemy of the state” and threatened him with prison time.

The son of a parliamentarian, Mr Dabwido first represented Nauru on the international stage as a super-heavyweight weightlifter, helping establish what has become Nauru’s trademark sport.

During his 18-months in office, he was also a leading voice in highlighting the threat of climate change to the Pacific, including at the UN General Assembly.

But he has since fallen out with the current president.

“The way our government thinks is we have an ATM machine on Nauru, and that is ruining my country.”

The Nauru government has accused him and other opposition MPs of spreading "lies about the country” and its president for speaking to journalists overseas. Nauru has no independent media.

In 2015, he and others were charged with rioting over an anti-government protest outside parliament and he ended up having to fight a bitter court case, known as the ‘Nauru 19’, to clear his name.

Mr Dabwido has questioned why Australia has remained largely silent over the case, while New Zealand made cuts Nauru’s foreign aid in response.

Following the charge, Mr Dabwido’s passport was seized, and it took a court order for it to be returned so he could travel to Australia for treatment.

“I want to thank Australia for building us a $13m hospital [on Nauru],” he said.

“Previously when doctors there cannot help you and they put you on a flight out to where you can get medical attention.

“So if I criticise the system, that then keeps me there to die.”

The Nauru government has denied it prevented Mr Dabwido receiving medical treatment and said he has been free to travel since last July.

The Department of Home Affairs has previously declined to comment on individual medical cases on Nauru.

As well as having his say on the future of Australia’s refugee processing system, Mr Dabwido also had a personal last wish to fulfil; proposing to his partner of eight years, Luci.

He had hoped to do it in Paris, at the top of the Eiffel Tower, until events overtook him.

“The doctor, unfortunately, told me I have days or weeks to go … So I proposed to her in the cafeteria in the hospital [straight after diagnosis] and she still said ‘yes’.”

I proposed to her in the cafeteria in the hospital.

About 30 people - almost the entire Nauruan community in Sydney - gathered at the Nurses War Memorial Chapel in Little Bay last week, overlooking the Pacific Ocean, to take part in a commitment ceremony.

And despite Luci running late, everything went to plan.

“I feel incredible, I’m the luckiest man I the world, I feel so full of life and so happy, nobody can touch me,” Mr Dabwido said afterwards.

Tears welled in Mr Dabwido’s eyes as he talked of the island home he will never see again, but for now, he is focusing on the future he has left.

Luci's own future is now dependent on Mr Dabwido’s claim for asylum.

“Unfortunately what’s been done to me will be done to her if she goes back [and] I won’t be there to protect her,” Mr Dabwido said.

“I’m hoping my claim gets approved but the situation is very tight. The doctor has given me days, at best weeks, but the application is going to take weeks, and for it to be approved I’m meant to still be breathing.”

Correction: This article was updated on 20 March 2019 to note Mr Dabwido and Luci took part in a commitment ceremony in Sydney, not a legal marriage.