Factbox: Who owns what in the Australian media

RICARDO'S BUSINESS: There have been some major moves in the Australian media landscape over the past few weeks, with ownership changes, restructuring and massive job cuts announced. Feeling confused? This should help. 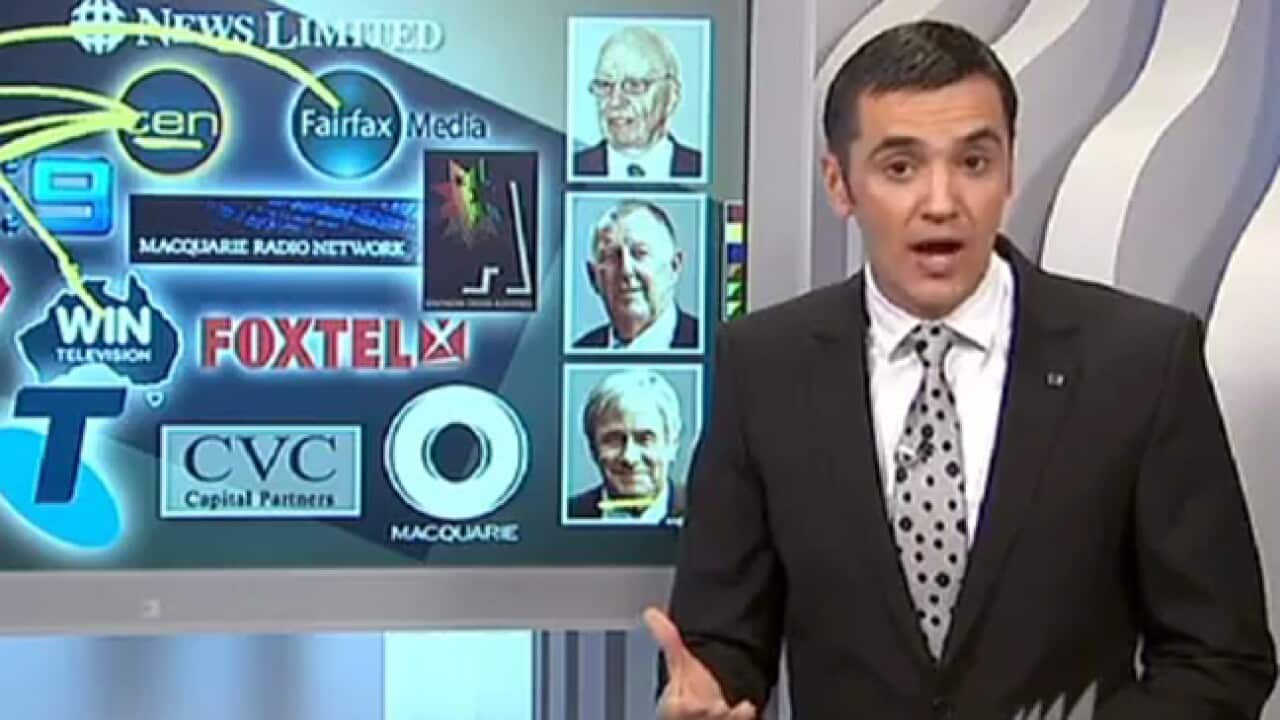 There have been some major moves in the Australian media landscape over the past few weeks, with ownership changes, restructuring and massive job cuts announced.

So I thought it would be a time to take a look at exactly who owns what at this point in time. Of course, firstly, we've got Australia's public broadcasters the ABC and SBS which have television, radio and extensive online services. But it's the commercial space that's seeing lots of activity.

This is the state of play, when it comes to television, Kerry Stokes controls Channel 7, owned by Seven West Media through his majority investment in Seven Group which also has some mining interests.

Advertisement
Apart from its main TV station 7, it also owns or has stakes in the West Australian, Pacific Magazines, Yahoo7 and Sky News.

Channel 9 isn't owned by any one person, instead private equity firm CVC Asia Pacific has control through its holding of Nine Entertainment, which also holds interests in NBN, Sky News, ACP Magazines, Ticketek and ninemsn.

But even it may be up for grabs because there's continuing speculation that the company may be seeking a stock market listing sometime soon. Bruce Gordon controls regional television network WIN TV which reaches more than 5 million people across Australia.

Then there's Channel 10 which probably has the messiest share registry of them all. In fact WIN's Bruce Gordon is the biggest shareholder followed by mining magnate Gina Rinehart and Lauchlan Murdoch.

James Packer also has a significant stake. Now this is where it gets interesting. Gina Rinehart, also has a big share in Fairfax.

She's actually the company's biggest shareholder at close to 19 per cent. If she increases her stake to 19.9 per cent then she'll need to make a takeover offer for the company.

Her other option is to use what's called the creep provision which lets her buy three per cent of the company every six months without having to make a takeover.

That's exactly what Kerry Stokes did with West Australian News a few years ago.

The reason why there's been a lot of talk about Gina Rinehart is because there are concerns that she may use her influence to sway editorial policy at publications like the Sydney Morning Herald, The Age, various online business and radio stations like 2UE and 3AW which the company owns.

Speaking of radio John Singleton is a significant player.

He controls Macquarie Radio Network which owns Sydney's highest-rating radio station 2GB but recently had a dud with Melbourne's MTR earlier this year.

Southern Cross Austereo meanwhile, which is owned by Macquarie Group, has interests in the likes of the Today Network including Sydney's 2Day FM and Melbourne's Fox along with some other regional television stations.

Australia's largest media company is Rupert Murdoch's News Limited, which has the Daily Telegraph, Herald Sun and the Australian as its main newspaper mastheads, along with a plethora of online divisions like news.com.au and its NewsLifeMedia magazine business which has brands like Vogue.

Finally there's FOXTEL which recently merged with Austar. It's currently owned by Telstra and James Packer through Consolidated Media, which Kerry Stokes also has a key stake, through Seven Group. But that looks set to change. News Limited has offered $2 billion to James Packer for his stake in ConsMedia which has an interest in FOXTEL. He's agreed.

A sale would free up some capital for Mr Packer to pursue his casino and gaming business and expand further into Asia.

He's also reportedly looking into acquiring Sydney's Star casino and eyeing the Echo Entertainment register. If Mr Stokes accepts any proceeds, they would be likely be used to pay down debt.

Then if the whole deal goes ahead Rupert Murdoch would then own all of Fox Sports and share control of FOXTEL with Telstra. It certainly is a tangled media web.