The family of an Indigenous teenager who was forced to the ground by police has addressed the media. 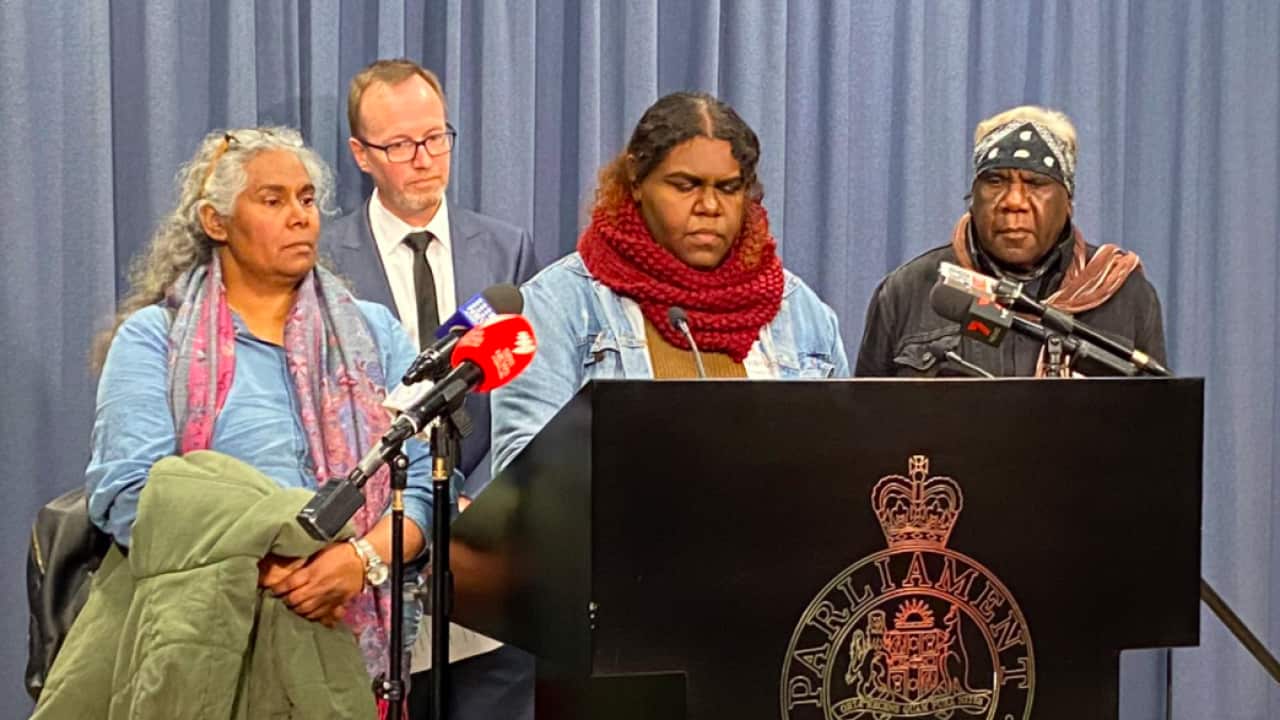 The family speaks to the press on Wednesday. Source: Nakari Thorpe

The family of an Indigenous teenager who was taken to hospital with minor injuries following his arrest at a Sydney park on Monday has spoken out.

On Wednesday, the teenager's sister told a press conference the actions of police were "unacceptable".

"The use of excessive force was unnecessary ... This police officer [who was involved] must be charged," his sister said.


Advertisement
She said "the way our people are brutalised" was frightening.

"[We] cannot explain our anger and frustration ... If he had fallen any other way, he could have been injured much worse."

During the press conference, members of the family took a knee, mirroring those protesting in the US against police brutality.

"Every day is a bad day for Aboriginal people," he said.

"This has brought up a lot of anger and frustration because of what I had to go through [growing up]."

The teenager was taken to St Vincent’s Hospital following the arrest. Source: Facebook

His mother described her son as a "typical teenage boy".

"[But] because we're Aboriginal ... we experience extra obligation to answer to people - who we are, where we're going and what we're doing, when we're just walking along.

"I'm his mother, I don't think that he should be made to feel like he's in a prison that's made up of the whole world."

Police
are investigating the incident, which occurred at a Surry Hills park in inner Sydney
.

'A long way to go in this country'

"Instead of calling out the conduct of this police officer, we had the police commissioner suggest that this was an officer who just had a bad day. In no other occupation would the leader of an organisation excuse a wanton assault [like this]."

When asked about the arrest on ABC, NSW Premier Gladys Berejiklian said "we still have a long way to go in our country".

"What happened in the US is a good wake-up call for all of us, and I think that all of us have our hearts breaking as to what's happening in the United States," she said.

"And we have to ensure that we can do what we can in our own country to protect all of our citizens."

Police Minister David Elliott said Sydney "was not Minnesota", referencing the death of George Floyd in US police hands in Minneapolis.

"I understand [the teen] is active in the PCYC so I'd be very keen to see what professional standards come back with, and I think the important thing here is to make sure the police and the young fellow, their relationship is reinstated," Mr Elliott told reporters.

"I was just as disturbed about the threat from a young person to physically assault a police officer as I was with the response from the police officer."

Footage of the arrest was captured on a mobile phone and posted on social media.

After being verbally threatened, an officer can be seen telling the teenager to turn around and put his hands behind his back. He then kicks the young man's legs out from beneath him and handcuffs him while pinning him to the ground.

A bystander can be heard yelling: "You just slammed him on his face. He's in pain."

The teenager was subsequently released without charge.