Protests against police brutality have continued into a ninth straight night in the United States, with officials in Las Vegas charging three far-right extremists with inciting violence. 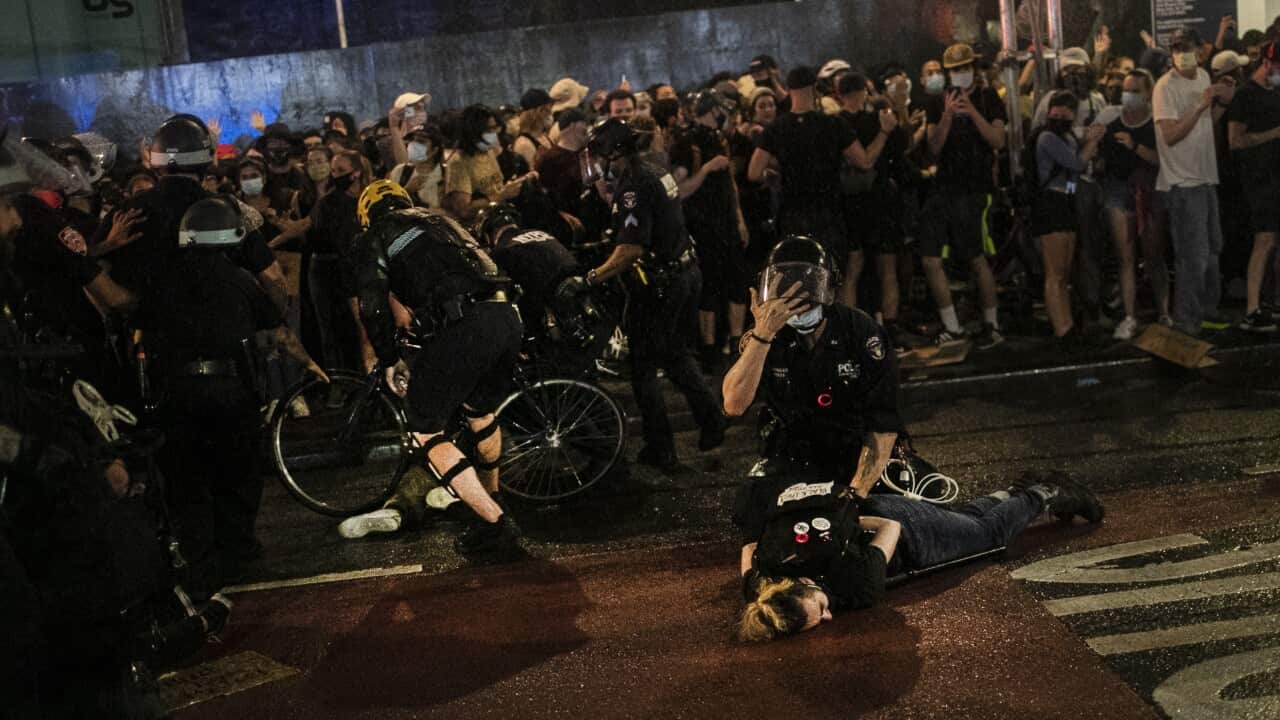 Three far-right extremists arrested by an anti-terror unit at Las Vegas protests over the killing of an African-American man by police were charged Wednesday with inciting violence, officials said.

The men allegedly belong to the "Boogaloo" movement, which has adopted Hawaiian shirts as a uniform and which promotes "a coming civil war and/or collapse of society," said a Nevada federal prosecutor.

The US has been roiled by nationwide protests against the killing of George Floyd by a white police officer in Minneapolis on 25 May.

Advertisement
The demonstrations have been largely peaceful but many have broken down into violence and looting after nightfall.

"Violent instigators have hijacked peaceful protests and demonstrations across the country, including Nevada, exploiting the real and legitimate outrage over Mr. Floyd's death for their own radical agendas," said the Nevada prosecutor, Nicholas Trutanich.

READ MORE
As George Floyd protests continue in the US, so does the spread of online misinformation

Reports of far-right activists, sometimes heavily armed, infiltrating the protests over the past week have included several claiming to be part of the "Boogaloo" movement.

Stephen Parshall, 35, Andrew Lynam, 23, and William Loomis, 40, all live in Las Vegas where they were arrested on Saturday by an anti-terror unit headed by the FBI.

They were in possession of a Molotov cocktail when they were detained, Mr Trutanich said.

If convicted on federal charges the men face up to 30 years in prison. They were also indicted on terrorism conspiracy and other charges by state officials.

Meanwhile, US protesters welcomed
new charges
brought Wednesday against Minneapolis officers in the killing of Mr Floyd - but thousands still marched in cities across the country for a ninth straight night, chanting against racism and police brutality.

With a key demand met, demonstrators nevertheless staged large and mainly peaceful rallies calling for deeper change in cities from New York to Los Angeles, hours after the new indictments were announced.

Pressure on President Donald Trump mounted as his former Pentagon chief Jim Mattis launched a searing broadside, accusing the Republican leader of trying to "divide" America during the unrest.

US cities including Los Angeles and Washington also delayed the start of their curfews by several hours Wednesday after looting and violence had subsided the previous night, while Seattle scrapped its curfew with immediate effect.

"For those peacefully demonstrating tonight, please know you can continue to demonstrate," tweeted Seattle mayor Jenny Durkan. "We want you to continue making your voice heard."

Police arrest protesters who had broken curfew on a marching through the Manhattan borough of New York Source: AP

But several arrests were made in New York after groups of protesters continued to march in Manhattan and Brooklyn after the city's 8.00 pm curfew had passed.

In Manhattan, protester Brian Clark earlier said the charges were "a good start" but vowed demonstrators would "exercise our right to protest until every black person gets the justice they deserve."

"It's not enough," added fellow demonstrator Elijah, who did not give his last name.

A large group also protested at the US Capitol in Washington DC beyond curfew.

Video uploaded to social media showed protesters in the latter city singing along to Bill Withers' classic song, 'Lean On Me'.


Thousands took to the streets in both Hollywood and downtown Los Angeles, where Mayor Eric Garcetti vowed to redirect $250 million toward black community health and education from budgets including the police department.

Mr Floyd's family, in a statement thanking protesters, called the arrests and new charges a "bittersweet moment" - and a "significant step forward on the road to justice."

They urged Americans to continue to "raise their voices for change in peaceful ways."

The 20-page report, released on Wednesday on agreement by the 46-year-old victim's family, showed the infection was not related to his death.

The diagnosis had been known since 3 April, and Mr Floyd "most likely" had no symptoms, the report said.

READ MORE
The US is burning. Does this help or hinder Donald Trump's re-election chances?

The autopsy also revealed the victim's lungs appeared healthy, and he had some narrowing of the arteries of the heart.

The news came after the coroner's report was released on Monday showing that Mr Floyd had died of a heart attack after being restrained by the police officers.

The summary of his death on 25 May was classified as a homicide.

While condemning Mr Floyd's death, Mr Trump has adopted a tough stance towards the protesters, saying they include many "bad people" and calling on governors to "dominate the streets."

"We need law and order," he repeated on Wednesday.

Mr Mattis ripped into Mr Trump, calling him "the first president in my lifetime who does not try to unite the American people - does not even pretend to try."

"Instead, he tries to divide us," the retired Marine general said in a blistering statement posted online by The Atlantic.

The US president has raised the possibility of invoking the Insurrection Act to deploy active duty troops to quell unrest.

But Mr Mattis' successor Mark Esper said that option should only be used as "a matter of last resort and only in the most urgent and dire of situations."

"We are not in one of those situations now. I do not support invoking the Insurrection Act," said the current defense secretary.

White House spokeswoman Kayleigh McEnany said Wednesday that the act remains "a tool available" to the president, who is facing a tough reelection battle in November.

"The president wants to protect America's streets," Ms McEnany said, describing the criticism from Mr Mattis as "a self-promotional stunt to appease the DC elite."

Mr Trump meanwhile denied media reports that he was rushed for his safety to the White House bunker while protests raged in the streets outside.

"It was a false report," Mr Trump told Fox News Radio, before saying that he did go into the secure area for an "inspection" and only for a "tiny, little, short period of time."