The UN has called Yemen the largest humanitarian crisis in the world and warned that 14 million people across the country face imminent famine. 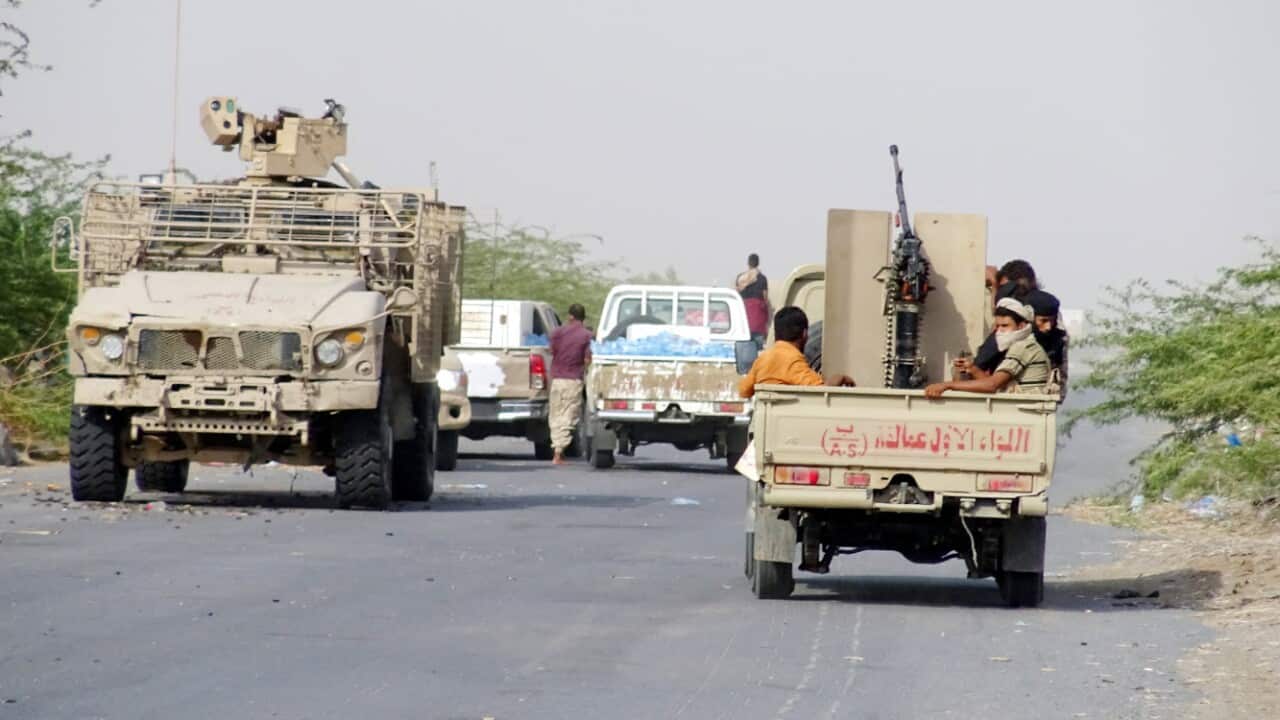 The bloodshed comes despite growing international pressure to end a years-long conflict that has killed thousands and pushed the impoverished Arabian Peninsula nation to the brink of famine.

Advertisement
Fifty-three Huthi rebels have been killed and dozens wounded in battles and air strikes over the past 24 hours in Hodeida, according to medical sources in the port city, which is a key gateway for humanitarian aid.

Huthi media reported air strikes in Hodeida on Sunday but did not give a fighter casualty toll.

Thirteen pro-government troops were killed, according to medical sources in Aden and Mokha, where their bodies were transported.

Nearly three quarters of the country's imports flow through Hodeida, from where they are transported by land to areas further north.

The port is controlled by Yemen's Iran-backed Huthi rebels and under blockade by Saudi Arabia and its allies in a government coalition.

The UN children's fund (UNICEF) warned an assault on Hodeida city would jeopardise the lives of Yemenis across the country who depend on its port for humanitarian aid.

"Yemen is today a living hell - not for 50 to 60 percent of the children -- it is a living hell for every boy and girl in Yemen," he told a news conference in the Jordanian capital.

The UN has called Yemen, long the poorest country in the Arab world, the largest humanitarian crisis in the world, and warned that 14 million people across the country face imminent famine.

The Hodeida clashes erupted on Thursday just hours after the government said it was ready to restart peace talks with the Iran-backed Huthis.

The offer followed a surprise call by the United States for an end to the Yemen war, including air strikes by the coalition.

Both the coalition and rebels stand accused of acts that could amount to war crimes, and the Saudi-led coalition has been blacklisted by the UN for the maiming and killing of Yemeni children in air raids.

According to the World Health Organization, nearly 10,000 people have been killed in the conflict, though some rights groups estimate the toll could be five times higher.

UN Secretary-General Antonio Guterres on Friday pleaded for a halt to violence to pull Yemen back from the "precipice".

And Hollywood star Angelina Jolie, a special envoy for the UN refugee agency (UNHCR), appealed for an immediate ceasefire.

"As an international community we have been shamefully slow to act to end the crisis in Yemen," she said in a statement Sunday.

"We have watched the situation deteriorate to the point that Yemen is now on the brink of man-made famine, and facing the worst cholera epidemic in the world in decades," Jolie added.

"The only way to enable refugees to return home, and to bring down the overall numbers worldwide, is to end conflicts themselves."

READ MORE
US calls for ceasefire and peace talks in Yemen

Multiple attempts to find a political solution to the Yemen conflict, widely seen as a proxy war between Saudi Arabia and Iran, have failed.

UN-backed peace talks between the Huthis and government collapsed in September after the rebels refused to travel to Geneva unless the United Nations guaranteed both their delegation's safe return to Sanaa and the evacuation of wounded fighters.

Yemeni government officials said Tuesday that the coalition had sent more than 10,000 new troops towards the battleground city, seized by the rebels in 2014 along with the capital Sanaa.

Saudi Arabia and its allies intervened in the war in the following year to bolster Yemeni President Abedrabbo Mansour Hadi whose government fled to the southern city of Aden.