Almost 500,000 Pfizer doses secured under a vaccine swap deal with the UK touched down in Sydney on Sunday night. 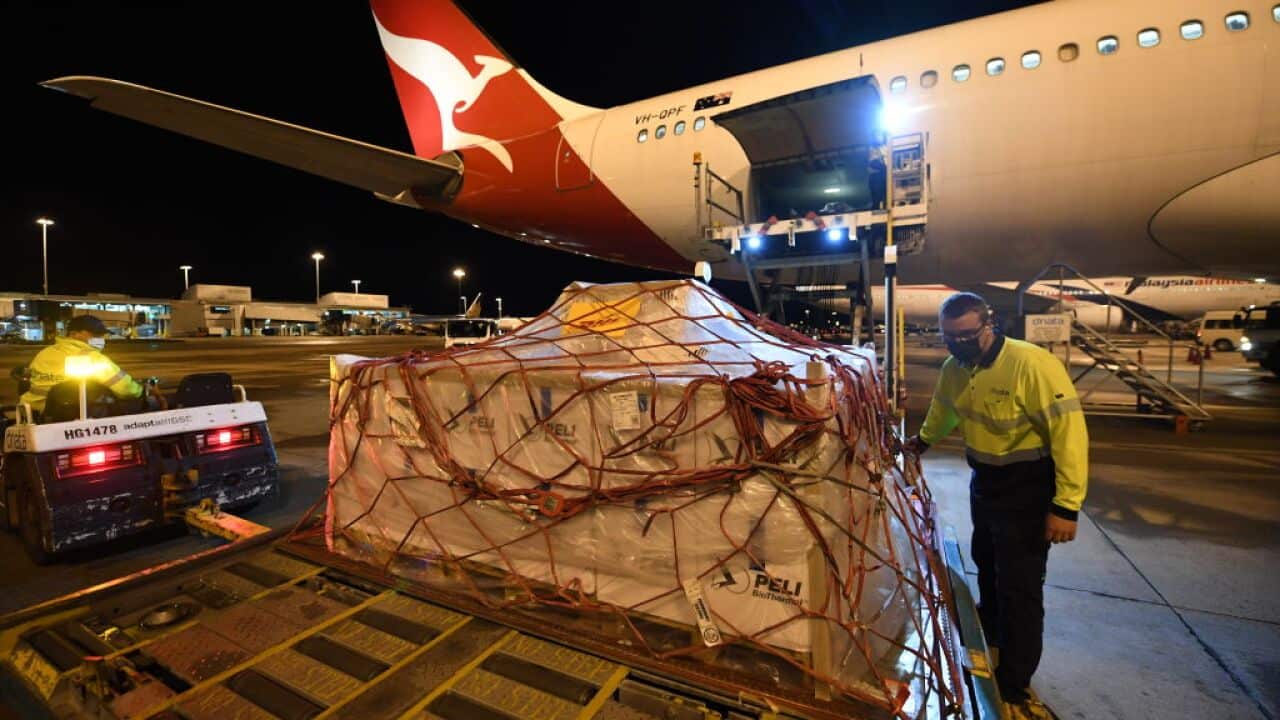 Pallets of vaccines being unloaded off Qantas flight after landing at Kingsford Smith International Airport on 5 September, 2021 in Sydney. Source: Getty Images

The man in charge of Australia's vaccine rollout is confident supply woes have been conquered after more Pfizer doses landed.

Lieutenant General John Frewen has turned his focus to stamping out lingering pockets of wariness in the community.

"I've got one eye firmly fixed on hesitancy issues," he told the Nine Network on Monday.

There are about 9,400 places to get vaccinated across Australia with hopes the figure will rise to more than 10,000 in coming weeks.

"Really it all just does come down now to people turning up," Lieutenant General Frewen said.

Almost 500,000 Pfizer doses secured under a vaccine swap deal with the UK touched down in Sydney on Sunday night.

Another 3.5 million from the agreement are due to arrive this month, while one million doses of Moderna are also expected to land in about a week.

Supply issues have been one of the major handbrakes on Australia's vaccine rollout which remains well behind other developed nations.

But momentum has built amid outbreaks in NSW, Victoria and the ACT.

Australia has fully vaccinated 37.8 per cent of its population aged 16 and above while 62.1 per cent have received a first dose.

Victoria recorded another 246 cases on Monday.

On Sunday, there were 1,485 new cases in NSW where the federal government is setting up 10 mental health clinics across Sydney and the Central Coast.

They will offer video and phone mental health services, as well as COVID-safe face-to-face support where recommended by a clinician.

Vaccine coverage targets of 70 and 80 per cent remain the subject of fierce debate between federal, state and territory governments.

West Australian Premier Mark McGowan wants to see rates between 80 and 90 per cent before setting a date to reopen his state's borders. He expects that to happen some time next year.

In Queensland, Premier Annastacia Palaszczuk is reluctant to automatically reopen her state's borders once the vaccination rate reaches 80 per cent.