It's been 10 years since Victoria's deadly Black Saturday bushfires and an Aussie flag plucked from the ashes has emerged as a symbol of resilience. 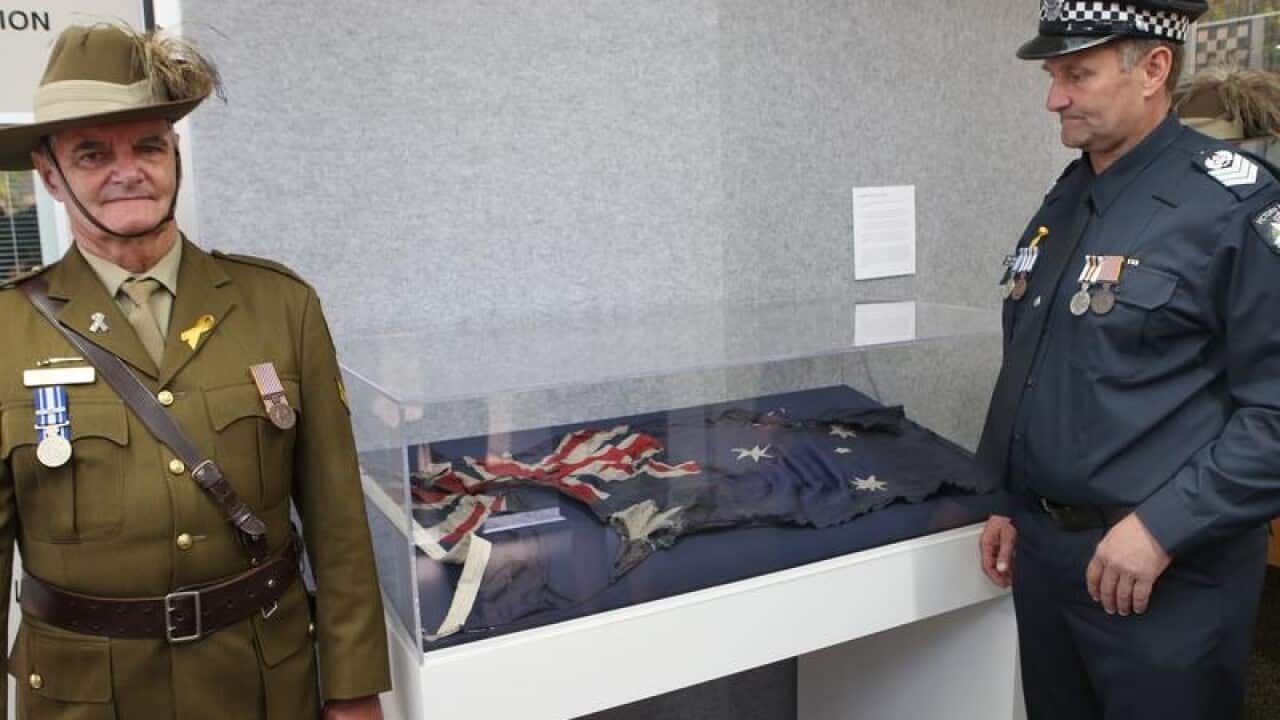 A tattered Australian flag, damaged in Victoria's deadly Black Saturday bushfires, has returned to its rightful home in Marysville during an emotional ceremony.

One of the towns worst hit on February 7, 2009 when 173 people were killed by the devastating fires, Marysville hosted a special police ceremony on Friday, the first in a series of statewide 10-year commemorative events.

Hundreds of people gathered to hear how officer-in-charge Sergeant Kevin Graham recovered the flag outside Marysville Police Station the day after the fires and instantly recognised its significance.

Advertisement
"It's symbolic of what's gone on here in the last 10 years and resilient community rebuilding and rising out of the ashes," Senior Sergeant Mark Hesse said.

The senior sergeant manages the Murrindindi area including Marysville, Kinglake, Kinglake West and Yea which were in the path of the fatal fires northeast of Melbourne.

"It's a celebration that the flag is coming back here ... it means a lot to the community."

He praised Sgt Graham for finding the flag after the town was left in ruins.

"So much devastation, so much heartache so, so much grief and Kevin's lost the police residence and the police station and everything he owns is gone. The only thing he finds in the ashes is the flag " Sgt Hesse said.

The flag represented the resilience of the police force and the entire Marysville community, Victoria Police Chief Commissioner Graham Ashton said at the ceremony.

"It's a symbol of recovery and hope."

Marysville resident Aeumporn Baker was among Friday's crowd and recounted her experience of watching her house explode and an intense escape.

"I drive and the fire come inside my car and the smoke in my eyes ... I still get nightmares," she said.

Thursday will mark a decade since the devastation which ravaged numerous communities, injured some 400 people and killed thousands of wildlife.

"We have learnt so much from those fateful fires," Country Fire Authority Chief Officer Steve Warrington said.

"While it is impossible to prevent all fires in our often unpredictable landscape, the community should take comfort in the fact we have some of the best firefighters in the world."

For many people who remember the bushfires, February 7 will be a tough day, Mr Warrington said.

"Rarely does a day pass where something about that day doesn't cross my mind or my colleagues'. For the past 10 years we have channelled our grief into a determination to ensure we keep learning and evolving," he said

A royal commission looked at the fires and the response of emergency services and subsequently many changes were made, including strengthened relationships between agencies and the community.

A Black Saturday state commemorative service will be held on Monday at Melbourne's Royal Exhibition Building.