International investigators have charged three Russians and a Ukrainian with murder over the shooting down of Malaysia Airlines flight MH17. 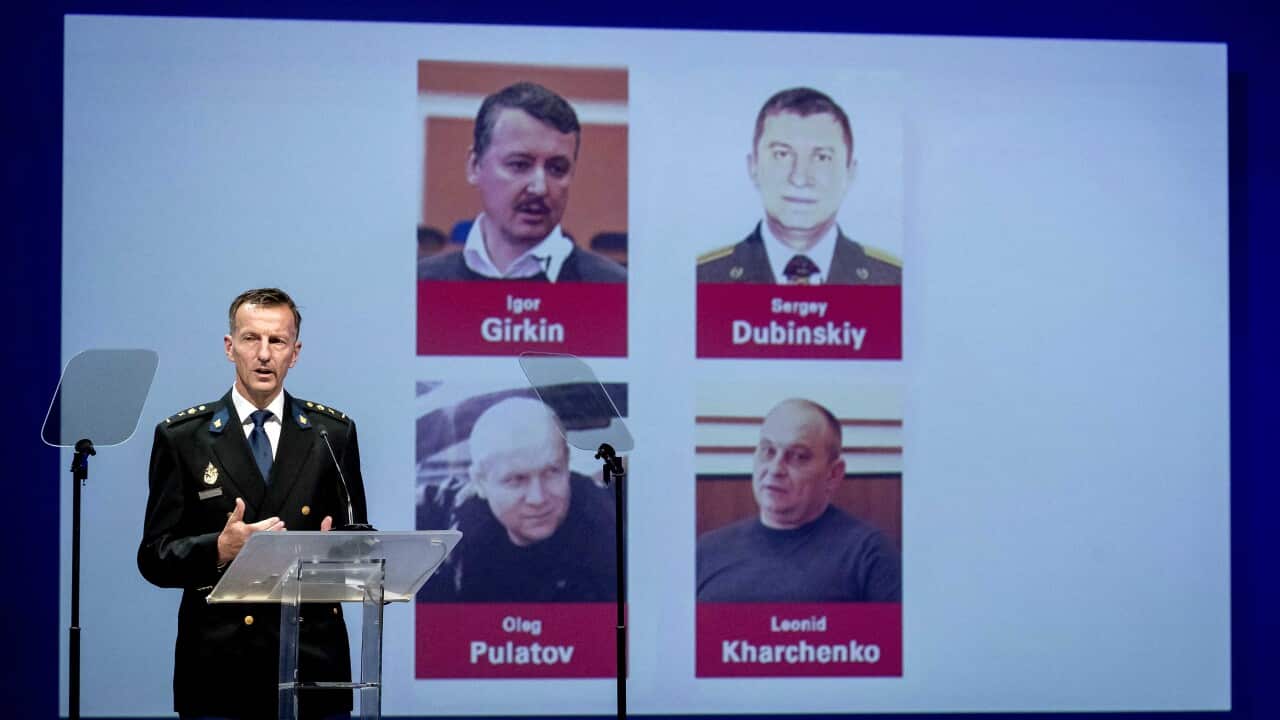 Wilbert Paulissen of the Joint Investigation Team (JIT) names the four suspects of the downing of MH17 in 2014. Source: ANP

Russia has criticised charges laid over the MH17 plane crash as "absolutely unfounded accusations" as Australia welcomed the move.

Malaysia Airline flight MH17 was travelling between Amsterdam and Kuala Lumpur in 2014 when it was hit by a missile over part of eastern Ukraine held by pro-Russian rebels.

Wilbert Paulissen of the Joint Investigation Team (JIT) names the four people on trial for murder over the shooting down of flight MH17. Source: ANP

Advertisement
All 298 people on board the plane died, including 38 Australians.

The Dutch-led team said it was going to prosecute Russian nationals Igor Girkin, Sergey Dubinskiy and Oleg Pulatov, and Ukrainian Leonid Kharchenko over the downing of the Malaysia Airlines plane.

Dutch prosecutor Fred Westerbeke said the four were to be held responsible for bringing the BUK missile system from Russia into eastern Ukraine "even though they have not pushed the button themselves."

READ MORE
Who are the men charged with downing MH17 ­– and will they ever face court?

"We won't demand their extradition because Russian and Ukrainian law forbids the extradition of their nationals. But we ask Russia once more to cooperate -- many of our questions remain unanswered," he told a press conference.

Relatives of the victims said they had been told the trial of the men for murder would start in March 2020, although they are likely to be tried in absentia as Russia does not extradite its nationals for prosecution.

'A significant step towards justice'

Russia's Foreign Ministry said it regretted the findings of the MH17 crash investigation and called the murder charges against Russian suspects groundless.

"Once again, absolutely unfounded accusations are being made against the Russian side, aimed at discrediting Russia in the eyes of the international community," the foreign ministry said in a statement on its website.

Ukrainian workers inspect debris at the main crash site of the Boeing 777 Malaysia Airlines flight MH17, which crashed over Ukraine in 2014. Source: EPA

Russia insisted last year that the missile was fired by Kiev's forces, adding that it was sent to Ukraine in the Soviet era.

Australia's Foreign Affairs Minister Marise Payne welcomed the announcement of charges and said the government remains committed to holding the perpetrators to account.

"This is a significant step in the Dutch prosecution towards justice and accountability for the victims of the downing and their loved ones," she said in a statement.

Relatives of those killed aboard MH17 welcomed the news.

"It's a start. I'm satisfied," Silene Fredriksz, whose son and daughter-in-law were killed in the disaster, told reporters. "I am happy that the trial is finally going to start and that the names have been announced."

Surviving relatives speak to the press at the press conference of the Joint Investigation Team. Source: ANP

Asked if she personally blamed anyone for the crash, Fredriksz said: "Mr (Russian President Vladimir) Putin. Because he made this possible. He created this situation. He is the main responsible person."

Piet Ploeg, president of a Dutch victims' association who lost three family members on MH17, told AFP that it was "very important news".

"The relatives of the victims have been waiting for this for nearly five years," he said.

READ MORE
Australia and Netherlands in talks with Russia over MH17

Girkin, who is thought to be living in Moscow, denied the separatists were involved. "I can only say that rebels did not shoot down the Boeing," he told Russia's Interfax news agency.


Dubinskiy, 56, who was formerly in the Russian military intelligence agency GRU, was head of the intelligence service of the Donetsk People's Republic, while Pulatov, 52, an ex-soldier in the GRU's Spetznaz special forces unit, was one of his deputies.

Kharchenko was a military commander in Donetsk at the time, the Dutch prosecutors said.

During the press conference by the investigators, number of telephone intercepts were played that they said showed the four were involved.

NATO chief Jens Stoltenberg said it was "an important milestone in the efforts to uncover the full truth".

Ukraine's foreign ministry urged Russia to "acknowledge its responsibility", while the office of President Volodymyr Zelensky's said he hoped to see "everyone who is to blame for the murder of innocent children, women and men" go on trial.

The war in eastern Ukraine and the MH17 disaster continue to plague relations between Russia and the West.

Since 2014, some 13,000 people have been killed. Kiev and its Western backers accuse Russia of funnelling troops and arms to back the separatists. Moscow has denied the claims despite evidence to the contrary.

However he said it was important to forge on gathering enough evidence to charge all the individuals involved in the tragedy.

Australian Federal Police Commander Peter Crozier at the press conference of the JIT on the ongoing investigation of the Malaysia Airlines MH17 crash in 2014. Source: ANP

In particular, the JIT wants to charge those who gave the order to shoot the missile, those who pulled the trigger, and the Russian officials who allowed the Buk missile launcher to be moved into the Ukraine.

"Five years ago a lot of people said you can start an investigation but you won't get much out of it," Mr Westerbeke said.

"Few people believed we would follow four people and now we are making that step. But this is an important step to show friends and relatives what happened and how it happened."