The French president said his country had been subject to an Islamist terrorist attack. 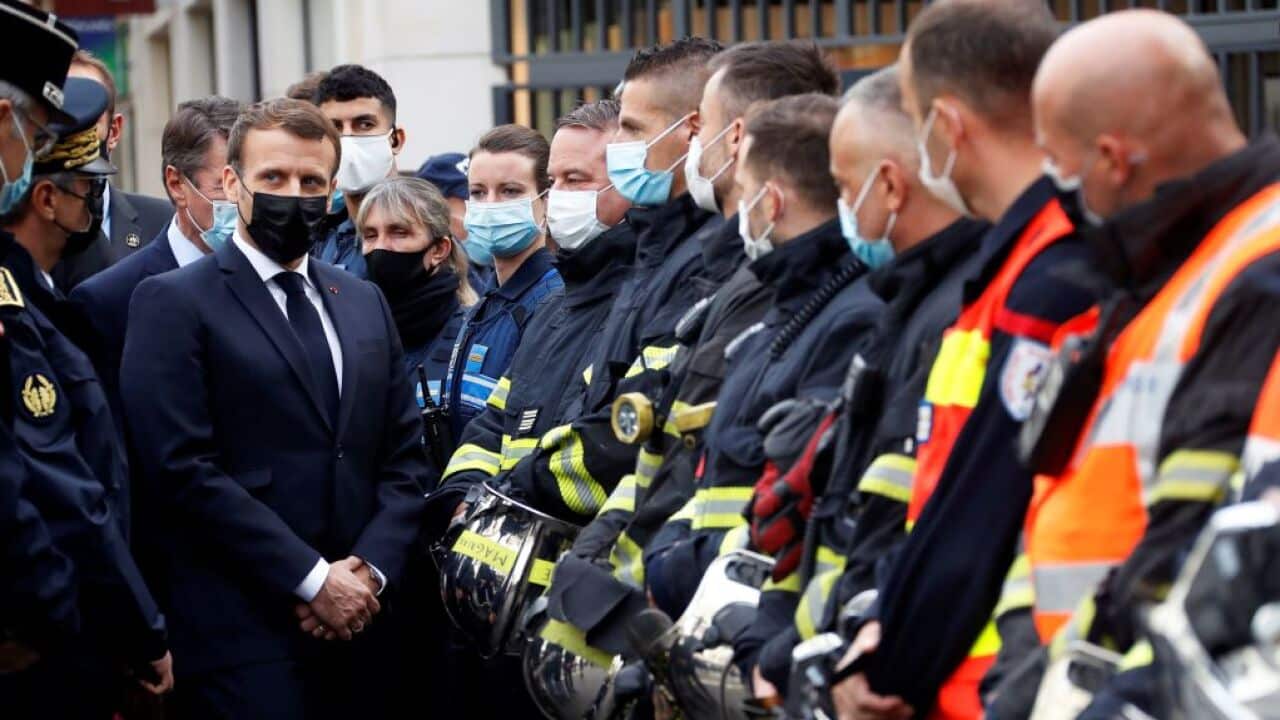 French President Emmanuel Macron (1st-L) visits the scene of a knife attack at the Basilica of Notre-Dame de Nice in Nice on 29 October. Source: AFP

France has lifted its security alert system to its highest level after three people were killed in a
knife attack at a church in the city of Nice
on Thursday.

A defiant President Emmanuel Macron, declaring that France had been subject to an Islamist terrorist attack, said he would deploy thousands more soldiers to protect important French sites, such as places of worship and schools.


Speaking from the scene, he said France had been attacked “over our values, for our taste for freedom, for the ability on our soil to have freedom of belief”.

Advertisement
“And I say it with lots of clarity again today: we will not give any ground,"  he said.

Police outside the Basilica of Notre-Dame de Nice after a knife attack in Nice, France on 29 October. Source: ABACA

The victims were "people targeted for the sole reason that they were present in this church at that moment," said Mr Ricard.

The attack, he added, was a reminder that "the deadly ideology of Islamist terrorism is very much alive".

In Saudi Arabia, meanwhile, state television reported that a Saudi man had been arrested in the Red Sea city of Jeddah after attacking and injuring a guard at the French consulate. The French Embassy said he was in hospital after a knife assault though his life was not in danger.

Within hours of the Nice attack, French police killed a man who had threatened passersby with a handgun in Montfavet, near the southern city of Avignon.

France’s Le Figaro newspaper quoted a prosecution source as saying the man was undergoing psychiatric treatment, and that they did not believe there was a terrorism motive.

Nice’s mayor, Christian Estrosi, said the attack in his city had happened at Notre Dame church and was similar to the beheading earlier this month near Paris of teacher Samuel Paty, who had used cartoons of the Prophet Mohammad in a civics class.

Thursday’s attacks, on the birthday of the Prophet Mohammad, came at a time of growing Muslim anger at France’s defence of the right to publish the cartoons, and protesters have denounced France in street rallies in several Muslim-majority countries.

At around 9am on Thursday, a man armed with a knife entered the church and attacked two women and a man, who was the church warden, according to a police source.

The warden and an elderly woman died on the spot, while the third woman managed to make it out of the church into a nearby cafe, where she died, Mr Estrosi told reporters. None of the victims has so far been named.

“The suspected knife attacker was shot by police while being detained. He is on his way to hospital, he is alive,” he said.

“Enough is enough. It’s time now for France to exonerate itself from the laws of peace in order to definitively wipe out Islamo-fascism from our territory.”

A woman prays in the street near the Notre Dame church in Nice, southern France. Source: AP

Reuters journalists at the scene said police armed with automatic weapons had put up a security cordon around the church, which is on Nice’s Avenue Jean Medecin, the French Riviera city’s main shopping thoroughfare. Ambulances and fire service vehicles were also at the scene.

Condemnations of the attack came from Britain, the Netherlands, Italy, Spain, Saudi Arabia and Turkey, whose President Tayyip Erdogan earlier this week slammed Macron and France over displays of the Prophet Mohammad.

Turkish Presidential Communications Director Fahrettin Altun said Islam could not be used in the name of terrorism, adding: “We call on the French leadership to avoid further inflammatory rhetoric against Muslims and focus, instead, on finding the perpetrators of this and other acts of violence.”

'We stand with the people of France'

Prime Minister Scott Morrison on Friday condemned the "heinous" and "despicable" attacks, as he extended his thoughts to the people of France.

Mr Morrison said he had exchanged messages with Mr Macron overnight, who he said declared: "we will win".

"Free peoples all around the world will stand together to defend freedom, to defend our liberties and to stand against the evil terror that seeks to assault that," Mr Morrison said.

"While this year has had many other challenges with COVID-19, nonetheless so than in France, it is an awful reminder of the evil that continues to lurk and seeks to strike against the innocent."

In Paris, lawmakers in the National Assembly observed a minute’s silence. The mayor of Paris, Anne Hidalgo, said the people of Nice “can count on the support of the city of Paris and of Parisians”.

A representative of the French Council for the Muslim Faith also condemned the attack.

“As a sign of mourning and solidarity with the victims and their loved ones, I call on all Muslims in France to cancel all the celebrations of the holiday of Mawlid," they said.

The holiday is the birthday of the Prophet Mohammad, celebrated on Thursday.

The foreign ministry of Saudi Arabia, the birthplace of Islam, said “extremist acts” such as that in Nice “contravene all religions, while stressing “the importance of avoiding all practices which generate hatred, violence and extremism”.

France is still reeling from the
killing by a man of Chechen origin of schoolteacher Paty
in a Paris suburb earlier this month. The assailant said he wanted to punish Mr Paty for showing pupils cartoons of the Prophet Mohammad to his pupils.

France, with Europe’s largest Muslim community, has suffered a string of Islamist militant attacks in recent years, including bombings and shootings in 2015 in Paris that killed 130 people and a 2016 attack in Nice in which a militant drove a truck through a seafront crowd celebrating Bastille Day, killing 86.