Scott Morrison became Australia's sixth PM in a decade after taking the Liberal Party leadership from Malcolm Turnbull last year. SBS News takes a look at his political career ahead of the federal election. 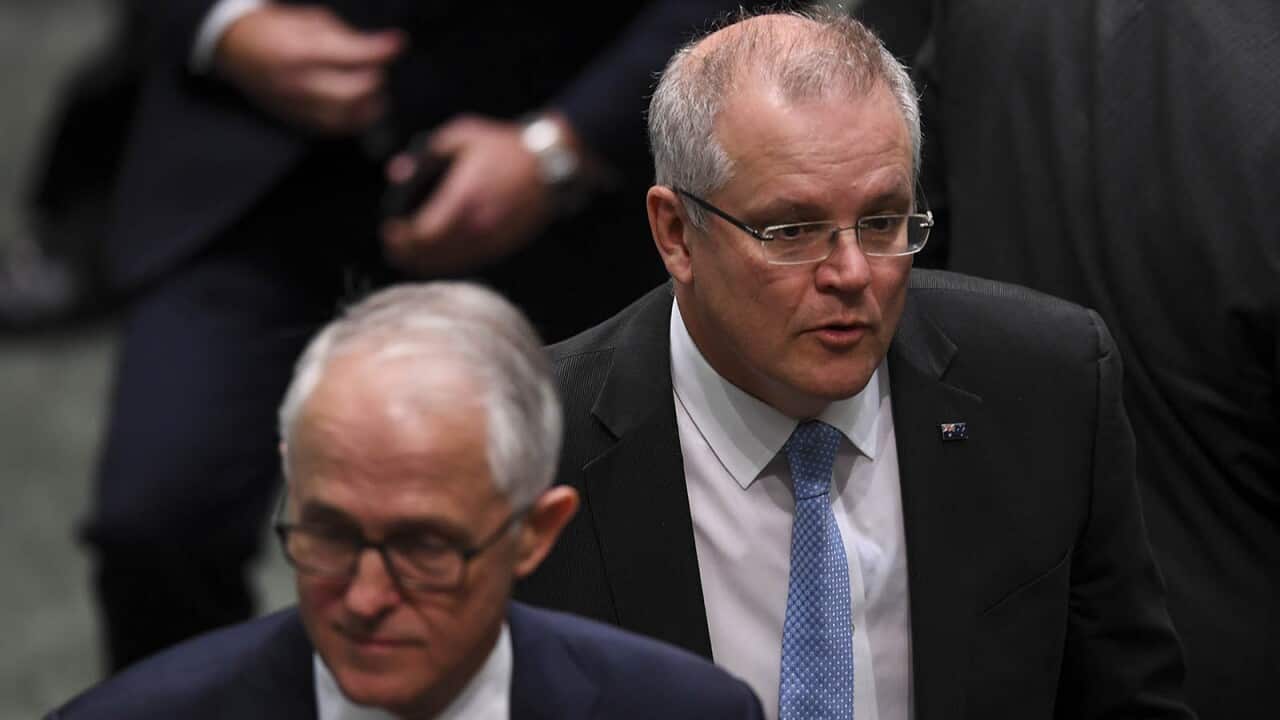 Scott Morrison became Australian's 30th prime minister last August when the Liberal Party voted him in as leader after a very public and acrimonious leadership spill.

The 50-year-old came into the job after the conservative wing of the party grew frustrated with Malcolm Turnbull's inability to pass his signature energy and tax-cut policies.

Scott Morrison - or “ScoMo” as he has come to be known - grew up in the beachside suburb of Bronte in Sydney's eastern suburbs. His father was a police commander and local government councillor.

Mr Morrison seemed destined to be in the public eye. He had a short-lived career as a child actor, appearing in a number of TV ads, including cough specialists Vicks in the 1970s.

Unfortunately, footage of the ads are no longer available, and Mr Morrison has given little away about his childhood roles apart from tweeting the Vicks ad included the jingle "Vicks'll lick a ticklin' throat".

He worked with the Property Council of Australia before moving into the tourism sector. He served as managing director of Tourism Australia from 2004 to 2006.

There, he was responsible for the now-infamous “so, where the bloody hell are you?” Lara Bingle ad campaign, which was banned in Britain for being too risqué.

A devout Christian, Mr Morrison identifies as evangelical and Pentecostal. He frequents the Horizon Church in Sydney's Sutherland Shire.

The megachurch can fit more than 1,000 worshippers.

Mr Morrison is a vocal supporter of religious freedom and voiced his opposition to marriage equality - in August 2017, he told interviewers he was voting no in the same-sex marriage plebiscite.

Mr Morrison spent four years as the state director of the NSW Liberal Party and entered federal politics in 2007, winning the seat of Cook, in the southern suburbs of Sydney, which he has held ever since.

He was appointed to the opposition frontbench after the 2010 election and, following the Coalition's victory at the 2013 election, he became immigration minister under Tony Abbott.

During his time in that role between 2013 and 2014, Mr Morrison set up Operation Sovereign Borders.

It was revealed last year he displays a trophy in the shape of a migrant boat with the caption "I Stopped These" in his office.

Mr Morrison has continued his tough asylum seeker rhetoric but appeared to display a rare departure from it at a public event last year.

“Politics is not for the faint-hearted - you've got to be prepared to carry the burden of decisions,” he said.

Mr Morrison then served as treasurer from 2015 to 2018. During this time, Liberal voters responded positively to his mantra of “jobs and growth" and the gradual erosion of national debt.

He also repeatedly voted against setting up a royal commission into the banking and financial services industry, calling Labor's push to set it up “a populist whinge”.

Scott Morrison with his wife and children in 2016. Source: AAP

How has he been doing?

As his ministry and cabinet were sworn in by the governor-general, he gave each of them an Australian flag lapel pin.

"I've been wearing this now for many, many years. I can't remember when I started doing this,” he said.

“The reason I wear it is because it reminds me every single day whose side I'm on."

Since then, Mr Morrison's prime ministership has faced several challenges: the loss of a majority in Parliament, accusations of Islamophobia and misogyny, and historic losses on legislation.

In February, he announced the re-opening of the Christmas Island immigration processing centre following the passage of the "medevac" law.

The early budget revealed the centre's re-opening -
and intended closure by July 1
- had cost $185 million.


Dr Zareh Ghazarian, an author and political scientist at Monash University, said Mr Morrison has done a decent job given the circumstances of his appointment as party leader.

“Mr Morrison has been able to shift focus away from the personalities within the Liberal Party to more about policies the party itself would rather focus on,” Dr Ghazarian said.

Some analysts say Mr Morrison has steadied the Liberal Party ship once again – but maybe not enough to win the federal election.

"He has been able to be that new leader, fairly effectively,” Dr Ghazarian said.

“The problem that he has is that the damage was pretty much already done by the time he became the new prime minister - the Liberal Party was so factionalised and fractured it has been really hard for him to unify his colleagues."

Prime Minister Scott Morrison visited Christmas Island in March warning that the Opposition has given a green light to people smugglers. Source: AAP

"I do not think there is much chance Scott Morrison will stay prime minister,” she said.

“I think the country is probably ready for a change of government, this is what we're seeing in opinion polls - but we also know that anything can happen in Australian politics.”