The G7 formally backed Sunday ramping up collective action on climate change and conservation, vowing to drastically limit government investment in coal this year and protect swathes of land and ocean over this decade. 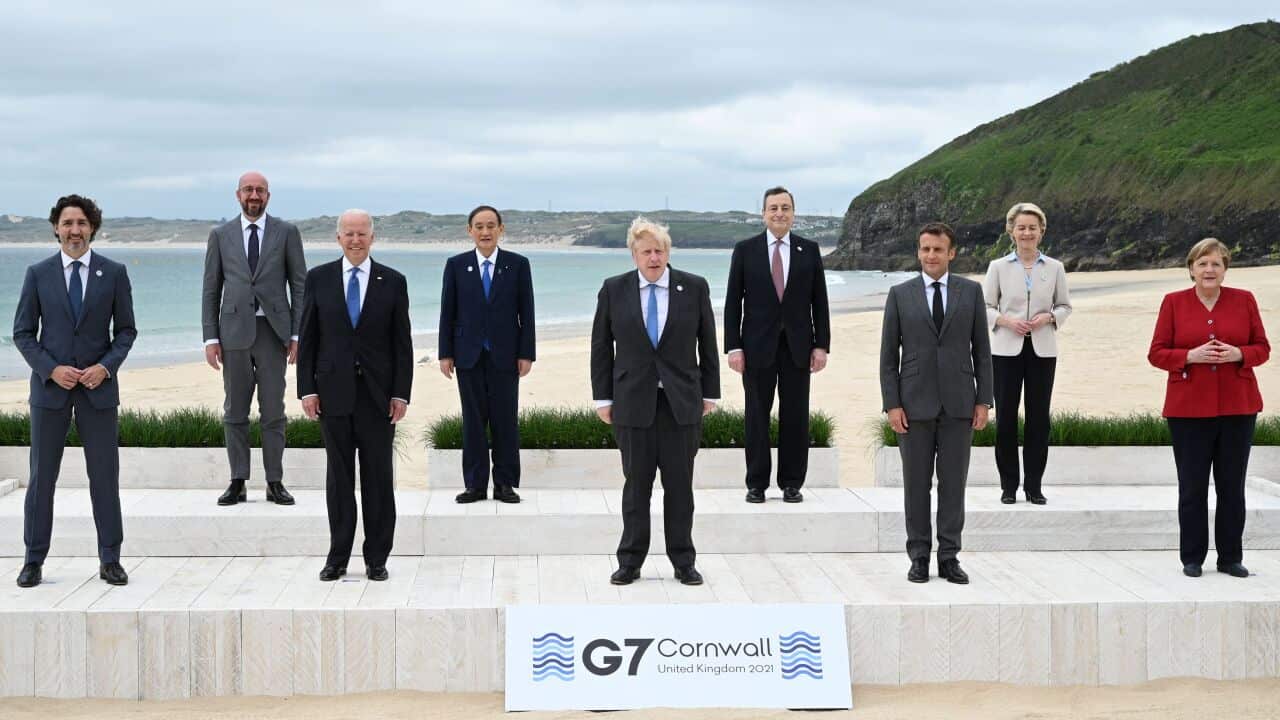 Leaders of Canada, the European Council, the US, Japan, Britain, Italy, France, the European Commission and Germany pose for a photo at the G7 summit. Source: AFP via Getty Images

The Group of Seven nations on Sunday pledged to rapidly scale up technologies and policies that accelerate the transition away from unabated coal capacity, including ending new government support for coal power by the end of this year.

The countries, in a communique following their summit in Britain, confirmed pledges to increase climate finance contributions as part of efforts to reduce emissions that contribute to climate change and help a move toward cleaner energy, although climate groups said firm cash promises and other details were missing.

Advertisement
"We stress that international investments in unabated coal must stop now and we commit now to an end to new direct government support for unabated international thermal coal power generation by the end of 2021," they said.

US President Joe Biden, speaking after the summit, noted a commitment of up to $2 billion "to support developing countries as they transition away from unabated coal-fired power."

The nations, in their statement, vowed to focus on other technologies, including carbon capture, to help speed up the transition away from coal.

"We will focus on accelerating progress on electrification and batteries, hydrogen, carbon capture, usage and storage, zero-emission aviation and shipping, and for those countries that opt to use it, nuclear power," the communique said.

The pledge comes as veteran environmentalist and broadcaster David Attenborough told the gathering of the world's richest nations the natural world was "greatly diminished" and inequality was widespread.

"The question science forces us to address specifically in 2021 is whether as a result of these intertwined facts we are on the verge of destabilising the entire planet?" he said.

"If that is so, then the decisions we make this decade - in particular the decisions made by the most economically advanced nations - are the most important in human history," he said.

Some green groups were unimpressed with the climate pledges.

Climate Action Network director Catherine Pettengell said the G7 had failed to rise to the challenge of agreeing on concrete commitments on climate finance.

"We had hoped that the leaders of the world's richest nations would come away from this week having put their money where their mouth is," she said.

"We have committed to rapidly scale-up technologies and policies that further accelerate the transition away from unabated coal capacity, consistent with our 2030 NDCs and net-zero commitment," it said.

The leaders also pledged to work together to tackle so-called carbon leakage - the risk that tough climate policies could cause companies to relocate to regions where they can continue to pollute cheaply.

But there were few details on how they would manage to cut emissions, with an absence of specific measures on everything from the phasing out of coal to moving to electric vehicles.