Gifting him flowers, the Nadesalingam family thank Anthony Albanese for allowing them to return to Biloela

The Nadesalingam family greeted Prime Minister Anthony Albanese with a bouquet of flowers as they took the opportunity to thank him for allowing them to return to Biloela. 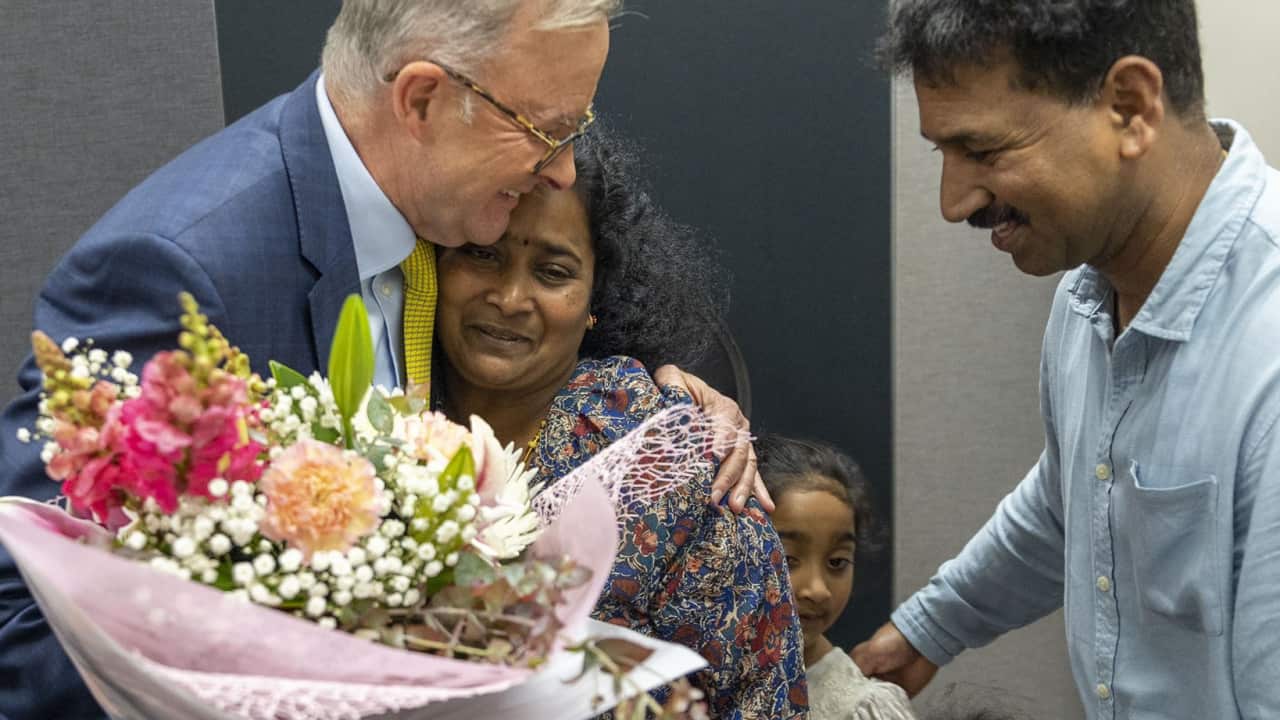 The Nadesalingam Tamil asylum seeker family, who returned to Biloela in central Queensland on Friday, have thanked Prime Minister Anthony Albanese for allowing them home.

Priya, her husband Nades and their two children Kopika and Tharnicaa brought a bouquet of flowers as a show of gratitude to Mr Albanese, who met with the family in Gladstone, about an hour from Biloela, on Wednesday.

Priya said it was wonderful
to return to her community
.

Advertisement
"I made quite a few friends, showering love and lots of heart, " she said. "My mind is relaxed. I am safe now."
The family was taken from Biloela in March 2018 and put in immigration detention, kicking off
a campaign by locals for their return
which lasted more than 1,500 days.

In 2019 courts blocked a Coalition attempt to send the family to Sri Lanka, where parents Nadesalingam and Priya were born.

They were then held at the Christmas Island detention centre for two years until then-immigration minister Alex Hawke moved them to community detention in Perth in mid-2021.

Following the May election, the new Labor government gave the family permission to return to Biloela on bridging visas

During a press conference on Wednesday, Mr Albanese said he couldn't promise a date for the family to be permanently settled.

He reiterated that the decision rested with Immigration Minister Andrew Giles.

However, Mr Albanese said
he could see "no impediment" to the family being settled permanently in Australia
.

Family friend Angela Fredericks, who has been campaigning for the family's return since 2018, said Mr Albanese assured them a solution for permanent residency was on the way.

"We didn't know if we would actually get to talk to the prime minister today, but it was so important for Priya and Nades to be able to convey their thanks," she said.

"It was really heartwarming to watch them embrace the prime minister and to actually thank him."

"Today we walk away feeling really reassured, and I guess knowing that we've got some more happy days that will be coming."
READ MORE
Furniture & groceries: Meet the Biloela locals offering support for the Nadesalingam family
Social worker, Bronwyn Dendle, who started the Home to Bilo campaign with Ms Fredericks, said the Nadesingams could now enjoy a sense of security.

"I think that vibe of certainty and peace is just around the corner and means our friends can just start to heal and settle into life in Biloela," Ms Dendle said.

Mr Albanese and cabinet ministers were in Gladstone to hold a 'regional cabinet' meeting.

Where can I go and what is the travel advice for each country?