The United Kingdom has released hundreds of immigration detainees over fears of a coronavirus outbreak, but Australia's immigration officials say that's not necessary. 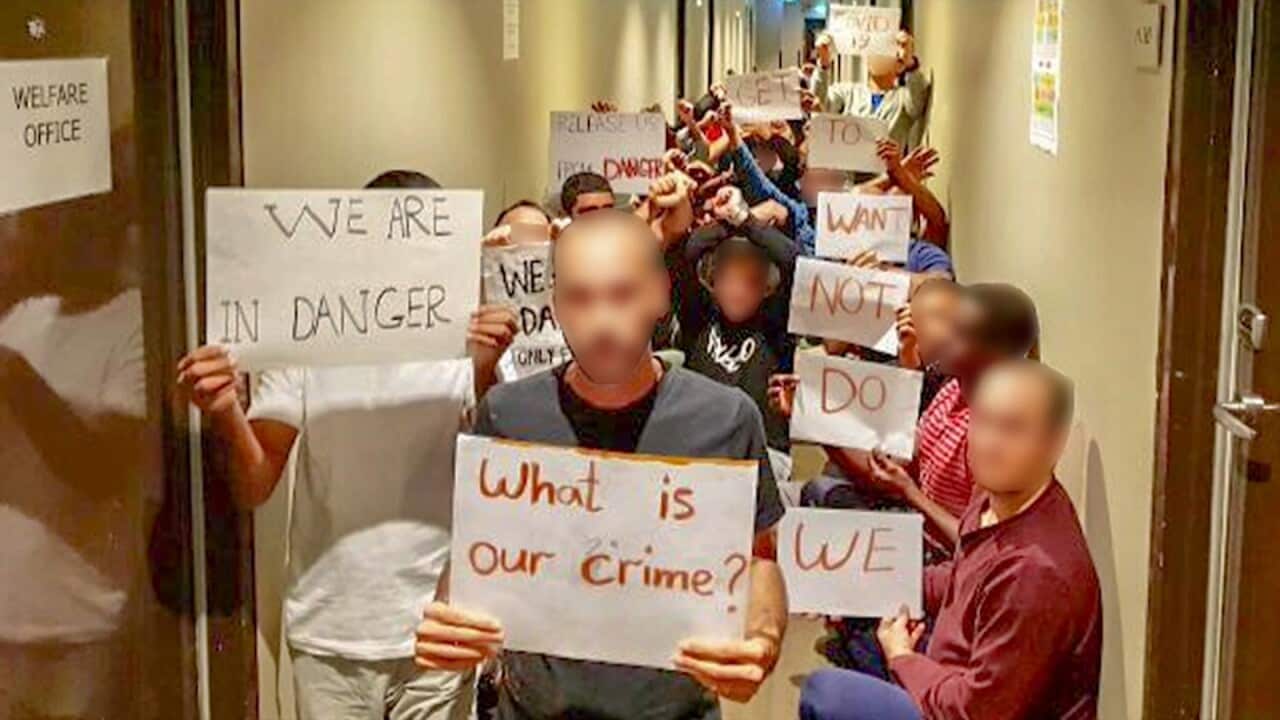 Detainees fear they will get coronavirus. Source: AAP

The Home Affairs Department has rejected calls to release any asylum seekers or refugees being held in immigration detention in Australia over COVID-19 concerns.

“It is beyond belief that no people from immigration detention have been released due to the virus,” immigration attorney and asylum seeker advocate, Alison Battisson, told SBS News.

Advertisement
“Health controls and physical distancing cannot be maintained. It is just impossible. Further, not only are the people in immigration detention in danger, but so are the people who work there, and their family and friends.”

Detainees say social distancing is not being followed in immigration facilities. Source: Supplied

But a spokesperson for the Home Affairs Department said no detainees had tested positive to coronavirus.

“Infection control plans are in place and plans to manage suspected cases of COVID-19 have been developed and tested.

"Detainees displaying any COVID-19 symptoms may be quarantined and tested in line with advice from health officials and in accordance with the broader Commonwealth response.”

Though no cases have been recorded among immigration detainees in Australia so far, a contractor employed by Serco, the company that oversees safety and security in all onshore detention centres and alternate places of detention in Australia, was found to have been infected by the virus earlier this month.

The contractor worked as a guard at the Kangaroo Point Central Hotel and Apartments in Brisbane which is being used as an alternate place of detention (APOD).

Serco said the contractor had not been in contact with any detainees for 11 days prior to his diagnosis.

Moz Azimitabar, a Kurdish-Iranian asylum seeker who was brought to Australia from Papua New Guinea for treatment of chronic asthma believes it's only a matter of time before he and others are infected.

He is currently being held at the Mantra Bell City Preston Hotel with 65 other detainees under guard and he said social distancing measures put in place by the government were not being practiced by government contractors.

“When we go to the lift there are 15, sometimes 20, people in one elevator when we are going down for eating lunch and dinner and most of them are not using gloves and masks and they touch the fruit when they are giving it to us.

"It’s really scary. Some of the guys here, including myself have asthma and breathing difficulties. We don’t want to get this virus.”

READ MORE
For a detainee inside an Australian immigration detention centre, COVID-19 is terrifying

In an audio recording provided to SBS News, a female Serco officer at the Mantra Bell City Preston could be heard trying to calm several fearful detainees.

“A number of measures to screen staff are already in place and include any staff or worker attending the facility continues to be asked additional questions related to their health and travel and are denied entry if there is any doubt,” the guard can be heard telling detainees.

All visits to detainees by family members and friends have been stopped, as well as all non-essential and non-critical outpatient appointments at clinics and hospitals.

According to the Department of Health, COVID-19 can spread from person to person through close contact with an infectious person, including in the 24 hours before they started showing symptoms.