Rare photos offering a unique insight into early 20th-century life from the perspective of Western Australia's Indigenous Noongar people are currently on show in Perth. This is the story behind them. 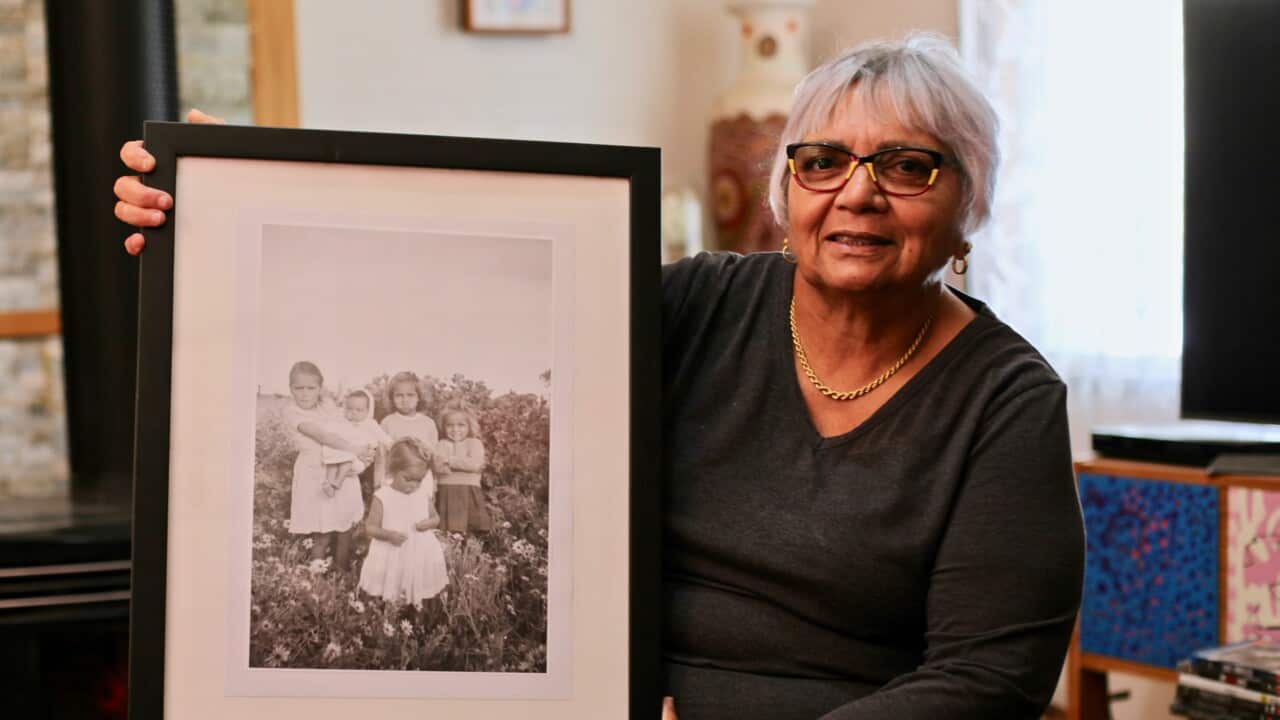 Dallas Phillips with one of her mother's photographs Source: Aaron Fernandes/SBS News

The rusty tin had damage around the edges, but all through the years kept safe a trove of old photo negatives.

As a little girl growing up in Goomalling, a tiny wheat belt town 130km northeast of Perth, Dallas’ mother Mavis Phillips (nee Walley), carried an old Brownie - a simple cardboard box camera first introduced at the turn of the 19th century - and took photos of her family and community.

Advertisement
How Mavis, a mother of 11 children, came to possess the camera remains a mystery.

But in 2015, after lying dormant for decades, the true scope of what those negatives contained was revealed - an extremely rare collection of work by one of Australia’s earliest known Aboriginal photographers.

The discovery came about when Dallas took the old chocolate tin into a community arts workshop in Goomalling.

“I walked and said, 'I have some old negatives'. We were holding them up in the light. I could see images but I didn't know what they were - and that’s how it all started,” Dallas told SBS News.

June Moorhouse, co-CEO of Community Arts Network, which facilitated the 2015 Goomalling workshop, remembers: “Dallas came in one day and shared this tin of negatives that had been in the family for 40 years. Once they were printed, it was apparent what gold was in these photographs.”

The images showed the Phillips family’s life on a farm outside of Goomalling, where Dallas, her parents, and siblings lived off the land.

“It showed images of my family and relations. It was just amazing,” Dallas said.

“I can’t believe that she captured us kids on the farm. The farm was a good life … When I see the clean life we had before being moved to the native reserve, I can’t believe it.”

Noongar life from a Noongar perspective

Mavis documented not just her family, but the changes that were taking place in regional Western Australia from the 1930s.

Shortly after many of the photos were taken, the family was moved from the farm to the Goomalling native reserve, where Aboriginal families were sent to live away from white families.

“Dad tried his hardest to keep us away from the reserve … he did not want to end up on the reserve,” Dallas said. “But he couldn’t fight it, because the native welfare was recruiting everyone to be in the one spot - it made it easier for them to monitor us mob.”

Dallas said the family lived a “beautiful lifestyle” on the farm.

“But things changed when we were put on the reserve - that’s when we were given food rations and the things you saw were brutal. We were Noongars - we should have been accepted for who we are, not made to change,” she said.

After being sent to the reserve, Dallas and her siblings were removed from their parents and taken to the New Norcia mission.

Dallas said that during her time at New Norcia she, like many other children, was sexually abused.

“They ruined so many little kids' lives,” she said. “The terrible life that most of us had, unless you’ve experienced the hurt, you won't understand.”

Throughout all of those experiences, Mavis continued taking photos, creating one of the most unique archives of early 20th-century life for Noongar people, documented by a Noongar person.

“Very often we’re seeing Noongar people presented as objects of interest in archives. This is someone taking photographs of daily life over many years and it’s a unique insight into life for this family and this community at that time,” Ms Moorhouse says.

“We move to the period where they were put on the Goomalling native reserve, and then to some photographs of the children once they’ve been taken to New Norcia and away from their parents, and somehow through all of that, Mavis kept taking these photographs.”

Mavis' photos are currently being exhibited in Perth, showcasing not just the untold history of Western Australia’s wheatbelt region, but also the Noongar woman's artistic eye.

“When you hear Dallas explain it, her mother carried the box Brownie [camera] around and wouldn’t use the eyepiece, she would just point it and shoot. Then you look at the work, it's worthy of any artistic recognition,” Ms Moorhouse said.

“The quality of the composition, her use of light, the textures she gets into the backgrounds - it's just extraordinary.”

The exhibition is a result of a partnership between the Perth Centre for Photography, Community Arts Network and the State Library of Western Australia.

More than 360 images have also been digitised and stored in a State Library database.

The exhibition runs until the end of July and was curated by Dallas, who wants both the beauty and the torment of her childhood to be understood, and the work of her mother recognised.

“I just hope people can see the beauty of it, of what she captured with her kids,” she said.

“There are so many Indigenous people that probably have old photos or items in their families. I would just encourage them to go look into them.”

The Mavis Phillips (nee Walley) Collection is on display at the Perth Centre for Photography until 31 July. A smaller selection of images is on show at The Nook at the State Library of Western Australia until 25 July.

Readers seeking support can contact Lifeline on 13 11 14, visit
lifeline.org.au
or find an
Aboriginal Medical Service here
. Resources for young Aboriginal and Torres Strait Islanders can be found at
Headspace: Yarn Safe
. Anyone seeking information or support relating to sexual abuse can contact Bravehearts on 1800 272 831 or Blue Knot on 1300 657 380.